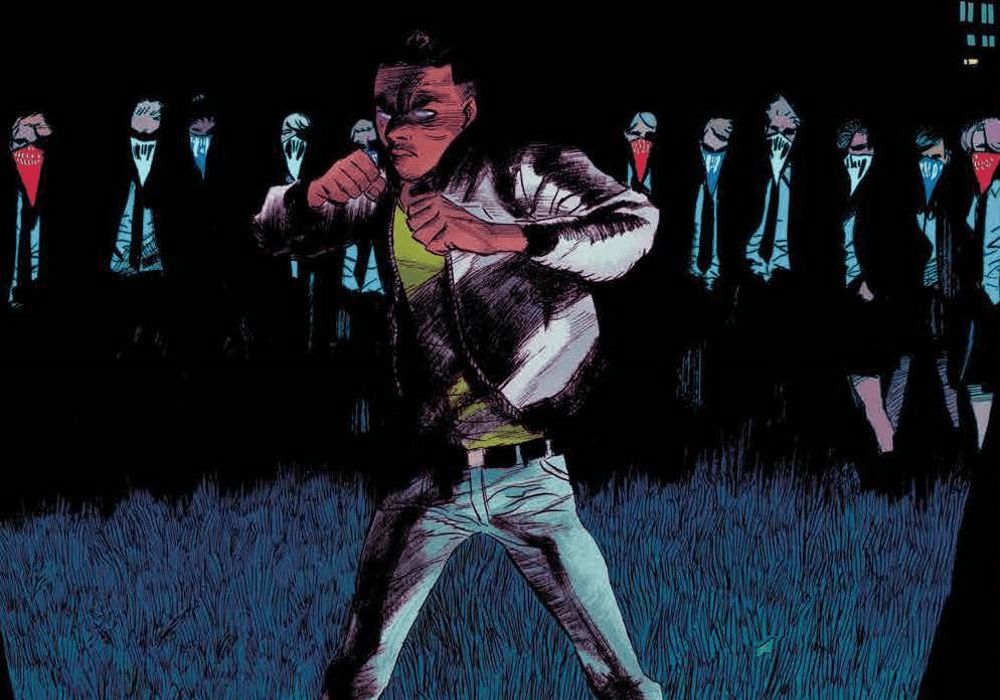 Choices and revelations are made in this illuminating second issue. Some Spoilers Ahead 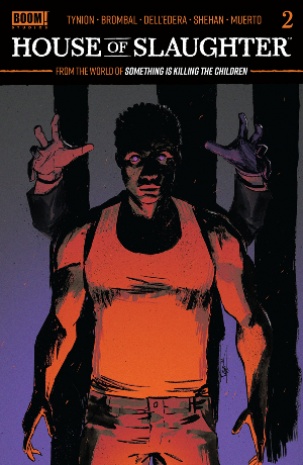 Picking up immediately where the premiere issue left off, Aaron has found Jace in the woods, alone, and looking evil. Having been sent to kill Jace, Aaron must now face the man standing before him and the influx of memories from the last fifteen years. Things are beginning to appear not as they once seemed and it is time to make a decision.

What makes Tynion and Brombal’s spinoff of “Something Is Killing The Children” so interesting in terms of its storytelling thus far, is how it feels so methodical and intentionally paced at a stroll, but still manages to feel like you’re being dragged through the story by your neck at a disconcerting speed. While only the second issue into this story, we are already beginning to understand Aaron in a way that was impossible to know him in the main series. Because we grew so close to Erica Slaughter in those first twenty issues, this man who seemed to be brought in strictly to antagonize her; there was no way devoted readers would think we could be interested in his story, or empathize with him. Yet here we are. With his final moments in that series we were given the idea that he could be a good person or have some selflessness in him. It’s an inkling of a deeper character that we are finally able to explore.

Jumping between time is a storytelling convention that is old hat, so when a writer, or writers, uses it in a way that feels intriguing and organically pulls you in, it must be praised. Moving between the present day of Aaron hunting down Jace and their first days together fifteen years prior, the script begins to shape this relationship and a deeper understanding Aaron and the entire House of Slaughter lore. Though we are given ample time within both parts of Aaron’s life, as the story begins to flip back and forth, even more so than it did in issue one, it starts to work like an optical illusion card. Two images on either side of the card, when flipped back and forth, blur to become one image. Tynion and Brombal, whether intentionally or not, have crafted a story that begins to bring two eras together giving us a more detailed image of who Aaron is. This kind of set-up can fall flat, but at no point does the time hopping feel unnecessary or like a gimmick. We do get a decent look at things through Jace’s eyes as well, including his harrowing nightmares. It’s a nice touch and gives more depth to him as a character, without pulling too much attention away from Aaron’s story.

We are also allowed another step into the rituals and training requirements of this organization. Just how important the totems are, what it means to keep them with you at all times, how they effect a person, and what other practices they are required to be used for. We get more answers the further we get into the lore, but it only raises more questions about the House of Slaughter. They smartly give us enough to make us understand one thing, but continue to keep as arm’s length before we can fully grasp another. It’s fascinating and, honestly, frustrating in the best way.

As we are shown a lightning round lesson of Aaron and Jace’s history together from their first meeting, to their most recent face to face the issue takes the time to show us just how scarred each boy is from their pasts. The writing gets us to sympathize and understand how they must be on guard at all times and learned from an early age to puff up their chest and be a ‘big man.’ While most in the organization easily see through Aaron’s facade, as he can barely keep it going for more than a few minutes, Jace seems to be the tough guy who is there to show everyone what he’s made of. Only at night, do her vulnerabilities come out. His bad dreams are nightly and Aaron soon realizes that Jace isn’t as hard as he thinks. It takes the entire issue for us to be shown just how much Jace wants and needs someone like Aaron as a confidant or friend.

We get word drops like “love,” and moments like the final pages that show us just how close these two may have gotten over the fifteen years. It’s a give and take in the writing that shows us what could just be two friends comforting each other, or it could be something that started as friendship and evolved into a romantic and sexual relationship. As Tynion is one of comics most awarded queer writers, I’d say the latter is the direction we are headed in, hopefully in a way that really opens us up to fully understanding Aaron. For being a character that annoyed me right up to his final appearance in “S.I.K.T.C.” I truly can’t believe how quickly it took for me to come around on him. I’m starting to really connect with him, and I think by the end of this series (however long that may be) readers could love this character, or at the very least fully understand and possibly sympathize with him.

With more comics having spinoffs in recent years, having multiple art teams, and writers, on them makes total sense. Keep the universe growing under the original creators oversight, while bringing in new minds to help shape it all. The art team on “House of Slaughter” is yet another perfect match up for this new series. Chris Shehan illustrates these issues in a hand that is his own while keeping a bloodline to Dell’edera’s work intact. Miquel Muerto continues his coloring duties on this book as well, so having the two together makes this feel right at home with the main series. The work is gorgeous. Shehan’s work is detailed yet loose and ethereal at times. Allowing for the dreamy style to come into every frame, and when we do see into a dream or nightmare, he changes things up just enough to make it clear we are not in the real world, but those moments still sit parallel to the rest of the issue. Muerto continues his stunning deep inks and flowing, but not washed out colors. Right now it feels like he should be the only colorist to work in this world. So I’m hoping he stays on as long as possible. This team is creating something utterly bewitching.

Final Verdict: 8.5, “House of Slaughter” is visually stunning and emotionally enriched as it continues to expand its impressive story.