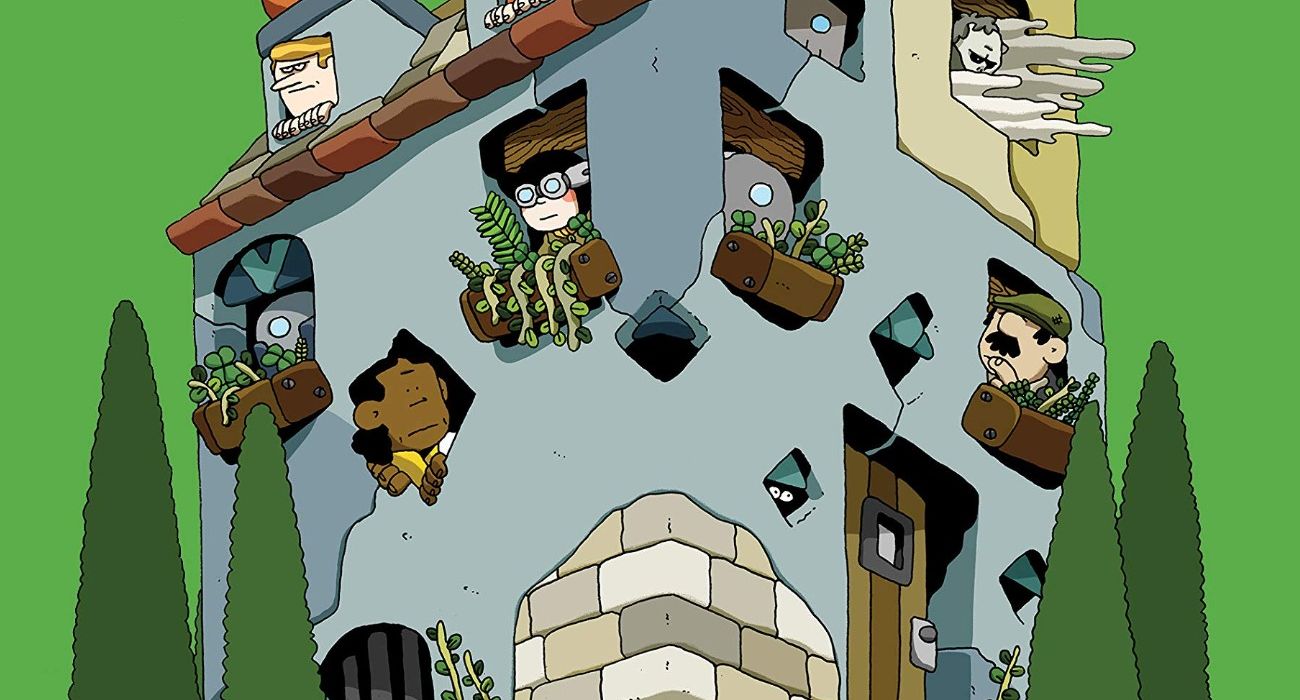 The last in the series of science fiction mysteries, “House of the Black Spot” manages to overcome its few faults by constructing a world that is a pleasure to experience. 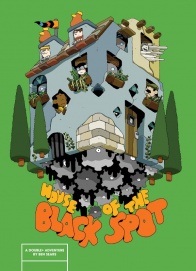 Cover by Ben Sears
Written, illustrated, colored and lettered by Ben Sears
The Double+ gang discover that sometimes greed can extend beyond the grave, as they are thrust into a battle between revolting real estate developers and their ghoulish goon bent on destroying the idyllic Gear Town with ghastly gentrification and the most frightful sight of all…condos!

This new graphic novel by Ben Sears throws us head-first into his established fictional universe, in which people live side by side with robot. This being my first entry into the ‘Double+ Series’ I wasn’t quite sure what to expect and ended up pleasantly surprised. I like that this story never stops to explain how things work and just rolls with it and expect you to move along. There are elements of science fiction, the floating robots, but they do not dominant the story (the setting actually feels rather retro); the robots have families and are expected to grow old and die. Possibly this is explained in one of the earlier albums, though I hope not. This is one case in which I enjoy not knowing.

The pleasantly-designed floating mechs simply add to the charm of the story, and charm is something Ben Sears has in spades. The art, the colors, even the lettering, everything in this story screams for unencumbered joy. It looks like the creator had fun making it, and the result is that I had fun reading it. Even when the story falters (we’ll get to that later) it’s still such a fun read simply because Sears such a good job of constructing a world that’s just fun to look through. Never a dull page, or even a panel.

After discovering his Uncle had died from a suspiciously early electrical failure the robot Hank (and his human partner Plus Man) take a trip back to Hank’s home town to the reading of the will. But life (and death) and never simple. Uncle Bill’s wealth has attracted a number of suspicious parties, from old relatives to disgruntled employees to real estate sharks; after the will is read all these parties find themselves looked together in a mansion, as tensions mount and suspicions grow. Also, what is the mysterious phantom popping all over?

If it all sounds a bit familiar I need to admit that yes, there is a definite “Scooby Doo” vibe to the plot. Not only in how the mystery is constructed, and eventually resolved, but also to the emotional pay off. Hank and Plus Man don’t really change throughout the story, they start of as good guys and remain so throughout. The emotional linchpin is Hank’s cousin Buxton, who learns from both Hank and his father Bill (posthumously) to stop being such a jerk. That’s a fine lesson, but it feels too easy and unearned. After a life-time of being a pretentious snob who hates poor people and probably cackles at thought of paving over their houses he gets one good scare and one decent heart to heart and suddenly he renounces everything he was. This would feel too easy for a Saturday morning cartoon, they make ’em more emotionally complex nowadays, never mind and otherwise finally constructed graphic novel.

The plot is the key problem. It’s not that it is weak as much as it feels incidental. Like Sears was heaving so much thing with character interactions, coming up with gags and portraying the world the actual plotting became secondary. There’s a whole lot of talk about the evils of gentrification, which is fine and good, but it never rises above the level of platitude. I agree with what’s being said, but it’s expressed in a simplistic manner. This would probably be a bad thing, overall, if only Sears wasn’t so good at doing what he likes. There’s a whole minor subplot with Plus man reaction to dogs that is developed in the background of the of the plot which is both sweet and funny: everyone who wants to pet a new dog while being weary of a possibly bite can emphasize.

All of this is greatly assisted by Ben Sears’s unique art style. Too many of today’s young-adult aimed comics have a same-y look to them, very rounded and soft edged with even softer colors; probably influenced by the success of Bone. It’s a good style, but any house-style can become boring when it’s too common for too long. Sears has his own color palate, which works with strong contrast the allows the otherwise visually-packed pages to pop; his line is more jagged than usual which gives the whole proceeding a charmingly wobbly look.

Sears is also an extremely dense story-teller. These large pages are packed with panels, and panels are packed with information. This information has less to do with the plot, but a lot to do with world building – the inside of houses and streets are packed with various form of clutter which gives them a live-through feeling that is often absent from more ‘pristine-looking’ science fiction realities. Just because we have robots doesn’t mean with stop being messy. “House of the Black Spot” is a very thin book but, like European albums, you get your money’s worth.

There are many of these tiny touches throughout that don’t add to the plot to the verisimilitude, Sears portray the characters in their everyday lives: travelling, working, eating. Constantly interacting not just with one another but with the world as a whole. All these tiny touches come together to create a sense of reality, this world might an exciting science fiction creation for the reader but for the characters it’s just their normal life. I liked visiting this world, I would like to see it again. Just on this basis the book is a triumph.