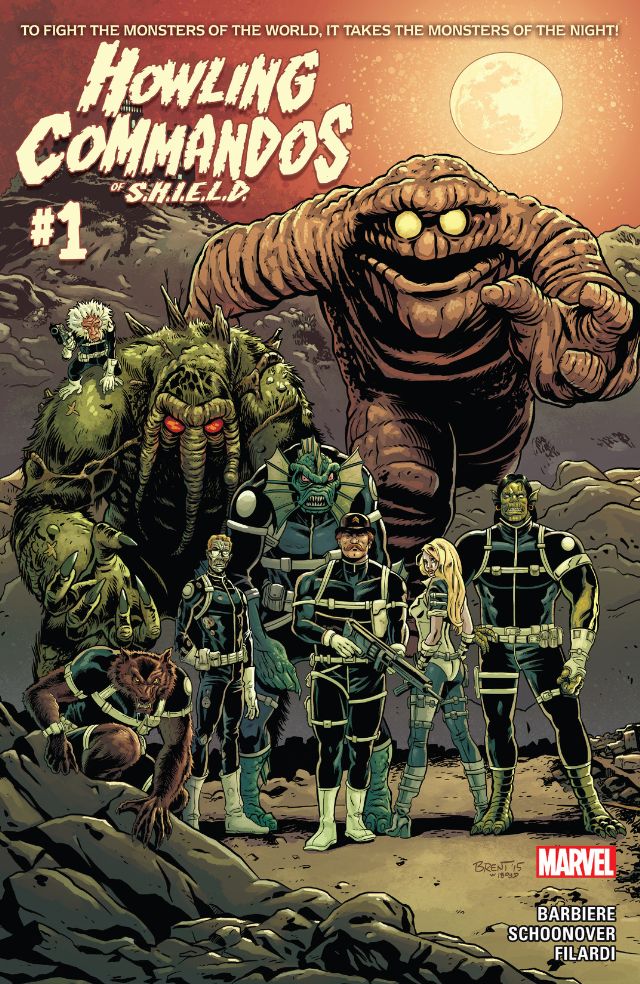 The landscape of the post-“Secret Wars” Marvel Universe continues to find its shape as a new addition to the line, “Howling Commandos Of SHIELD”, looks at the darkest nooks and crannies of the Marvel Universe… and blows them up. Frank Barbiere and Brent Schoonover have assembled a crack team of the weirdest and most dangerous monsters in Marvel history and are using them to fight the even darker threats that lurk out there in the shadows.

Read on below for our full, spoiler free review of “Howling Commandos Of SHIELD” #1. 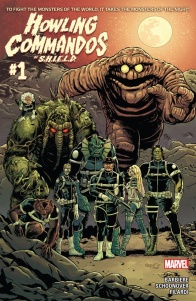 Written by Frank Barbiere
Illustrated by Brent Schoonover
Hidden deep beneath AREA 13 lies the clandestine headquarters of S.T.A.K.E. – a top secret division of S.H.I.E.L.D. housing aliens, mythical beasts, and all manner of extra-normal entities. Under the command of legendary soldier Dum Dum Dugan, these monsters step out of the shadows and defend the world against super human threats too dangerous for normal men as the All New, All Different Howling Commandos of S.H.I.E.L.D.!

The strange thing about reading these new Marvel comics that take place after “Secret Wars” despite the fact that we have no idea how “Secret Wars” actually concludes is that you end up with this dissonance between feeling like this should be a new Marvel Universe and that things should be different… and yet, nothing really is. This isn’t a knock against “Howling Commandos Of SHIELD”, by the way, it’s just something I noticed while reading it.

The basic setup for “Howling Commandos Of SHIELD” is that some time after the reveal during “Original Sin” that Dum Dum Dugan has actually been an LMD for the last, what, sixty years or something, Dum Dum has come to accept that fact and has helped set up STAKE, which is kind of like SHIELD except instead of working with The Avengers, they work with the Marvel horror characters from the 70s that even die-hard fans barely remember. Because, I mean, who really remembers Manphibian anyway? Still, this is a pretty neat set-up and allows Barbiere and Schoonover to bring back some long forgotten characters, give them a new lease on life and use them to explore the dark corners of this new and mysterious Marvel Universe.

The real problem with “Howling Commandos Of SHIELD”, though, is that while the set-up and the character writing is all rich and brimming with potential to explore the horrors of the universe, the execution is very conventional. This less of a horror comic and more of just an action comic with some monsters in it. This isn’t necessarily all that bad seeing as Barbeire and Schoonover do go whole hog on the action, but it did feel like something of a waste of potential to have all these great old school monster characters and have them just re-enact the Tanker chapter from Metal Gear Solid 2. To enjoy this comic, you really have to adjust your expectations of the direction Barbiere and Schoonover are taking the story. This isn’t Dum Dum using these monsters to go after even bigger monsters and exploring the horrors of the Marvel Universe, this is more like “What If The Avengers Was Made Up Of Characters From “Legion Of Monsters”?”

Even then taking into account that adjustment of expectation, there’s still really nothing here in terms of story. The issue is split between showing the Howling Commandos on mission and showing how they were brought together… except the flashback to how the team was brought together only focuses on Dum Dum and ends with a splash of the team’s headshots and their names (because that’s only way you’ll know any of these characters) before going back to the action. And then, during the action, the characters barely have any rapport during the fight so it just boils down to a bunch of nobodies fighting a bunch of zombies for a MacGuffin. If this were, say, some kind of Avengers book with more recognisable characters maybe that would fly for a acceptable opening, but you leave this issue without knowing any more about characters like Teen Abomination or Vampire By Night than you did going in except for maybe the fact that those characters exist.

Still, the focus on pulpy action is put together incredibly well by Brent Schoonover’s art. The majority of the issue focuses on the Howling Commandos first mission together as they’re overrun by zombies and Schoonover does a great job of co-ordinating and blocking the action across panels to show the unique attributes of each character without having to block the flow of the story with little narrative captions that explain what they can. It’s probably the only information you get about them, though, and maybe those captions would have been needed to tell us who they are. Schoonver’s art captures a sense of the old Howling Commandos series with thick, inked lines and heavy shadows that bring a touch of roughness to the characters and espionage edge to the settings while the neon colours of sickly pinks and greens by Nick Filardi bring that little touch of horror to this issue.

“Howling Commandos Of SHIELD” #1 is something of a story of wasted potential. This team and these characters definitely had the potential to become something unique and could have been the team book to explore the dark and twister history of this new Marvel Universe. Instead, the characters are flat and very little information is given about them to the reader, the plot is generic and is built around an excuse to have these characters go after a MacGuffin object with little reasoning as to why and there is very little in the way of actual horror despite the cast being made up of vampires, manphibians, zombies and a literal embodiment of fear. Oh yeah, by the way, Man-Thing is in this book and the only scene he’s utilised in is essentially an extend joke about how he’s the team’s Hulk. That’s about as deep as this issue gets about its characters.