Millar and Albuquerque’s precious hero makes his societal debut. But, while the world at large seems to have been crying out for a hero like Huck, it remains to be seen if he’s ready for the world. 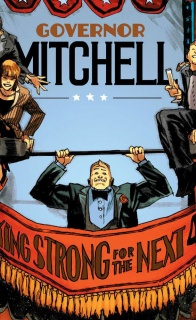 Huck takes his mission across the country, helping those in need, while powerful figures in the US establishment try to use his abilities for their own ends.

Mark Millar is a student of comics in the most traditional sense. He’s ridiculously well read and, like many comic book fans who grew up during the eighties, cites Alan Moore and Frank Miller as the two most defining voices in his literary upbringing. Both Moore and Miller as influences that Millar wears on his sleeve, and even a brief glance through his back catalogue  proves that, much like his heroes, Millar has a penchant for dark themes, conflicted characters, and stories with critically current social and political leanings.

Which is why people were so surprised when Millar’s latest release, the sweetly homespun “Huck”, hit shelves a few months ago. Millar’s latest hero was seemingly the antithesis of everything he’d spent a career constructing. Kind, caring, uncomplicated, Millar channelled the straightforward stylings of Siegel and Shuster (the masterminds behind Clark Kent’s literary birth) into the kind of hero that Steve Rogers could look up to.

The first issue of “Huck” saw its titular hero working in relative anonymity, and the second showed him using his powers for even greater good, albeit with more media attention than he’s ever received before. But it’s in issue #3 that Huck faces his first real challenge; navigating the tricky web of American politics.

Millar’s execution of this issue is, for me, a little less successful than the first two issues. watching Huck work in isolation his innocence and earnestness felt smooth and understated, but when he’s pitted directly opposite a group of politicians who are clearly attempting to use him for their own means their Machiavellian manipulativeness comes off as so obvious as to be almost laughable at times. While the plotting does feel in keeping with classic Superman stories that saw him pitted against corrupt mine owners and businessmen, there’s a lack of depth and clarity to some of the politicians that leaves their input feeling a little on the nose.

However, as the party continues, Huck’s social circle expands both exponentially and for the better. Millar pacing throughout this series has felt almost like a continuous montage, and the speed with which he’s introduced to grateful fans, reality TV gurus, and military minds, all of whom are angling to get themselves on his list, truly feels dizzying. This high-society hullabaloo is perfectly realised by Albuquerque’s delicate artwork, and his execution of the strong-but-silent figure of Huck flows through so many expressions (from thankful magnanimity through confusion to awkward sexual innocence, all perfectly rendered) that he manages to hold centre stage while barely saying a word.

Albuquerque’s Huck cuts an impressive figure. Standing head and shoulders above everyone else in the book, and approximately as broad as a barn door, he should be the epitome of strength. But, much like Frank Quietly’s pitch-perfect execution of the Superman/Clark Kent dynamic in “All-Star Superman”, Albuquerque manages to imbue the homespun Huck with a bumbling sense of fragility that makes him seem, for all his physicality, delicate. One specific series of panels that show Huck’s huge shoulders sagging as he reads the letter that was left with him when he was abandoned is genuinely painful to read – the perfect visual representation of a character in turmoil.

But, while this issue, and this series in general, has been relatively slow and stylised – an examination of how a golden era character would fare if they were transplanted into the modern day – Millar and Albuquerque still have a story to tell. Both previous issues have made brief reference to the fact that Huck isn’t the only super-powered person in this world, and, in this issue, we finally get to see an interaction between two such individuals.

The issue of heroism in the media was clearly one at the forefront of Millar’s mind as he planned this book, but as it heads to its conclusion his secondary story starts to rear its head. I’m a fan of Millar’s work, but I do think that some of his books are definitely better than others. While I loved “Kick-Ass”, and “Wanted”, “Secret Service” and “Nemesis” left me feeling a little cold. In my opinion his books work best when he works past the grimness of his heroes and forges characters with mirth and heart in a way that is truly his own. “Huck” typifies that kind of balance for me, as well as managing to be an interesting revisit of classic comic book tropes that still feels fresh today. As far as I’m concerned, this is potentially his best book to date.

Final Verdict: 8.1 – Totally unlike anything else I’m reading right now. This book deserves all the praise it gets and more!