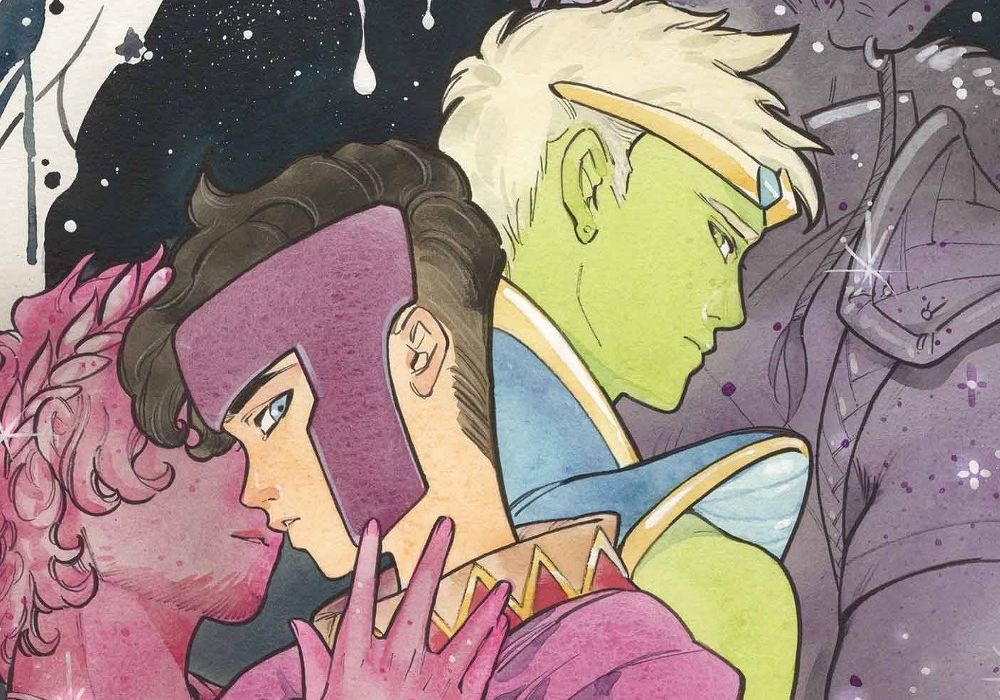 I am not the biggest expert on the mythology of Marvel comics. Sure I know the big names like the X-Men, the Avengers, and Spider-Man, but when it comes to a lot of the lesser known stuff I’m pretty ignorant.

The point is that a book like “Hulkling and Wiccan” #1 is new to me. All I know is that these two heroes used to be part of the New Avengers and have been a couple for a while, so if you’re looking for confirmation that this book fits within current Marvel continuity or if the creative team really nailed the essence of the characters from previous story runs, this isn’t the review for you.

With that out of the way, let’s dive into “Hulkling and Wiccan” #1 and see what’s what. 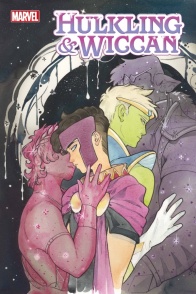 Hulking & Wiccan have found their happy ending at last…or have they? When a magical artifact shows them the paths not taken in life and love, will Billy and Teddy find their way back to each other? Will they even want to?
The hit Infinity comic by Josh Trujillo (UNITED STATES OF CAPTAIN AMERICA) and Jodi Nishijima (SPIDER-GWEN: GWENVERSE) appears in print for the first time!

After the happenings of Marvel’s latest, universe altering event stories, Hulkling has found himself to be the new emperor of a combined Kree and Skrull Empire, two races that have been at each other’s throats for a while but have now made their peace. While the responsibilities of leadership are many and weigh heavily upon Hulkling’s head, the job does come with the perk of living in royal luxury with his husband and royal advisor Wiccan. The problem is that, while their marriage and relationship is a happy one, both of them have jobs to do and, like every superhero relationship, they have skeletons in their closet that have a nasty habit of eroding trust and the love they have for each other. Will Hulkling and Wiccan’s love survive? Or will it break under the weight of their respective guilt and responsibilities?

“Hulkling and Wiccan” #1 is written by long time comic book scribe Josh Trujillo, who does a very good job of making both these characters relatable and enjoyable to root for. Writing any kind of relationship in fiction is tricky: make it too perfect and the reader’s will roll their eyes and call it unrealistic, but make it so they’re too incompatible and the readers will question why the characters are even together in the first place. Trujillo does a very good job of threading the needle here. On one hand it’s very clear that Hulkling and Wiccan care for each other deeply, but on the other hand it’s also clear that there is room for growth and change in the relationship. Trujillo does a very good job of showing this change by taking both characters and putting them through a magical gauntlet that shows them what could have happened and where their lives could have changed, courtesy of one of Marvel’s most infamous magic users. It’s a kind, sweet, and very pleasant story of how love conquers all, with just enough conflict to make it relatable without being overbearing.

While “Hulkling and Wiccan” #1 is a solid stand alone love story, it does seem to be unsure if it has a place in the broader Marvel continuity, which leads to some problems. The book is billed as a one shot comic, but it goes out of its way to establish where and when it takes place amid all the other events taking place across the universe. The problem is that while long time fans of these characters may appreciate this, it does make things a bit confusing for new readers and people who have not followed these characters to figure out what’s going on. Case in point, it’s established that the visions that Hulkling and Wiccan experience are from alternate dimensions, but that’s only clear in the copy around the book and not specifically stated in the book itself. Are their potential new lovers tied to their individual history? Will they show up at a later date? Do we have to pay attention to this one shot for future reference? We don’t know, and while it doesn’t distract from the essence of the story, it can be a pretty big distraction.

The artwork for “Hulkling and Wiccan” #1 is provided by Jodi Nishijima and it is extremely pretty to look at. While the setting is mostly cast aside in order to focus on the characters, when Nishijima does show the reader where the story takes place, she creates these luxurious and detailed settings that feel grandiose and epic. The highlight is Hulkling’s home of the Imperial Palace, which looks like an extremely comfortable place to live. Even when the book gets violent and harsh, the settings still look pleasant and reasonably safe. This is a book where the locations do not hurt, and all the conflict is placed on the internal journey of the characters.

As for the characters themselves, the book has an extremely strong manga feel, with the characters portrayed with the usual big eyes and small noses that feel like they came out of a Sailor Moon comic or other shoujo story. The manga influences continue with the handful of action sequences scattered throughout the comic with its heavy use of speed lines and motion blur. It’s a very specific and very well established artistic style that might not appeal to some readers, but will absolutely appeal to people who like manga or are interested in adding more variety to their artistic tastes.

“Hulkling and Wiccan” #1 is a pleasant book to read with just enough conflict to be interesting, but not enough to place the entire universe in jeopardy. It’s a book that establishes the characters as one of the most solid and established romances in all of Marvel and while it may not be the best way to introduce new readers to these characters, it’s certainly enough to make a lot of people curious.

Final Verdict: 8.5- While you don’t have to know a whole lot about these characters to enjoy it, it feels like a bit more exposition could have made it better..