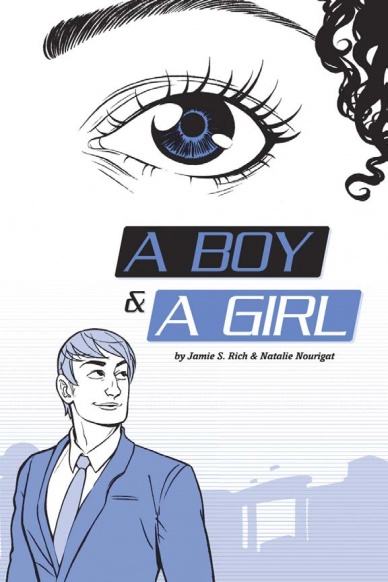 This week, Natalie Nourigat updated her travel comic with a very wonderful new extended strip. In it, Tally detailed one of the primary aspects about traveling that many had previously warned her about, delivering a personal take on cultural bias and institutionalized fear and pressure that holds young women back from exploring a broader world. It’s really something worth reading.

And in doing so, a thought struck me. After being a fan of Tally’s from her “Between Gears” days, I realized that I’d picked up a copy of her new graphic novel from Oni — and then never read it.

Which brings us to this week’s graphic novel review, “A Boy and a Girl,” illustrated by Natalie Nourigat and written by Jamie Rich.

Taking place in a bit over 24 hours, the story focuses on the eponymous boy and girl who meet at a party, hit it off and then lose each other quickly. For Travis, the boy and a hopeless romantic, finding this mystery woman becomes his obsession, hoping not to lose her in the short timespan that exists between a meet-cute and complete memory loss. For Charley, the girl and a realist, she’s more concerned with the fact that in a days time she will be gone, as she’ll be shipped out to an unknown place soon and wants to live life as much as she can before it’s too late.

Oh. And Charley is actually an android. It’s not particularly hidden, though the book is coy about it at first. The prime detriment to the relationship of Charley and Travis, though, is that while she’s an android and capable of expressing certain elements of love, there exists this disconnect between what is real and what is artificial — and the book explores this element quite succinctly. 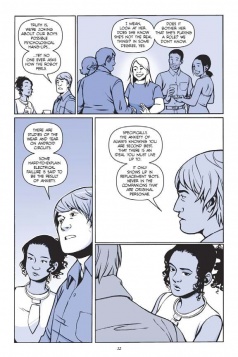 “A Boy and a Girl” is a fairly interesting read. Set in the distant future but still resembling something familiar, it’s easy to look at the book and view it as a simple romantic story. After all, at its surface, that is what it is; the book is rather full of various tropes and elements that are familiar to any pop culture connoisseur, and even those that have just seen Love Actually a while bunch. In terms of setting up the dominos and knocking them over, much of what “A Boy and a Girl” does is follow along previously established and proven to work ideas about relationship stories, particularly those that unfold over a limited timeframe.

And yet, despite otherwise being full of these tropes, “A Boy and a Girl” still makes for a heartfelt read. That is it’s main draw, in fact; it’d be hard to say that you haven’t read or seen this story before, because in all likelihood you have. However, Rich and Nourigat still have so much to say with their characters that it’s still easy to become lost in this little world and to find something new within it. What “A Boy and a Girl” seems more interested in doing is exploring particular facets of relationships, examining them on a different scale under a more intense microscope. There are certain aspects about being in a relationship that are universal, particularly when you first meet, and “A Boy and a Girl” takes these universal concepts and tries to figure out why they’re universal.

You see, “A Boy and A Girl” manages to have a fairly unique perspective to display. That the book is a comic told in chapters, with each chapter changing the perspective between Travis and Charley, we’re given a unique way to explore the characters in a more confidential fashion. For Travis we’re able to get into his mind, to see his good intentions — but when it comes to Charley, it’s easier to then see how Travis’ actions could be weird, or even unwanted at first. A lot of this kind of storytelling relies heavily on dialogue and body language, but this look behind the curtain changes things, especially with Charley being who she is. This isn’t to say that Charley herself has a very binary thought process, but her situation does offer a relatively different perspective to the events as they unfold, given how different her priorities are for the duration of the story.

Not only that, but a lot of the book is spent in discussion of ideas bigger than the characters themselves. While a good deal of the dialogue is spent in the same sort of pleasantries you or I might have in a general discourse, Travis and Charley are both presented as characters who want more understanding out of life, who have bigger things on their mind than just each other. They find interesting ways to relate to one another and share their experiences and interests, and through this the book takes an almost Linklater-esque approach to how relationships can develop. Their banter is consistent throughout, but at very key moments in the story does it explore some interesting ideas related to this rather difficult situation — and even then, it’s very easy to see some of it as an allegory to the basic differences and inability to understand each other that exist in regular men and women, let alone when one is an android. 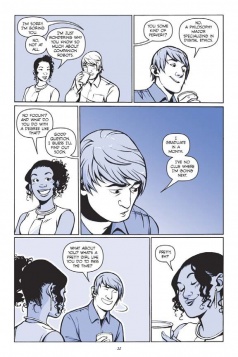 However, what the book can boil down to is something along these lines: no relationships are the same, and all relationships are the same; “A Boy and A Girl” simply takes these moments and, through a very resonant lens, explores the hows and the why of it all. We see how they fall in love, and we know exactly why from both parties, and “A Boy and a Girl” earns its uniqueness through this. It’s tough to really say something too new in a story like this, but when you have affable characters and a lot of theory mixed together you end up with an entertaining finished product.

Of course, that the book has such a smart take on relationships and the idea of love is no real surprise. Jamie Rich is a rather accomplished storyteller in comics, and exploring relationships with different levels of intimacy is something he has done for much of his career. “A Boy and a Girl” isn’t too far out of his wheelhouse, truth be told, and it’s actually quite easy to see recurring thematic elements and ideas, as well as a level of optimism present in even the most cynical of moments. Rich does manage to keep the book fresh, though, and pleasing for his fans (let alone completely accessible to new ones), but the main thing that is noticeable about his portion is the rhythm of his dialogue. Given how philosophical the characters can be at times it would be easy to lose our interest with overly smug remarks or repartee, but Rich walks a very fine line here between the characters being overdone and being believable that adds a goo amount of authenticity to an otherwise unreal landscape.

There’s also an interesting amount of balance present in the characters. When we first meet them, Charley displays a bit of the Manic Pixie Dream Girl stereotype, which is actually appropriate in hindsight; as the story evolves, though, it actually presents a rather interesting reason as to why, one that is matched with the artwork. Charley and Travis transform in interesting ways throughout the book, and Rich guides them together as they essentially weave back and forth idealistically between each other. Travis and Charley both display qualities to them that are both exclusive and commonplace to the human experience, but that this becomes a central idea within the narrative certainly offers for a different focus through which Rich explores who they are. 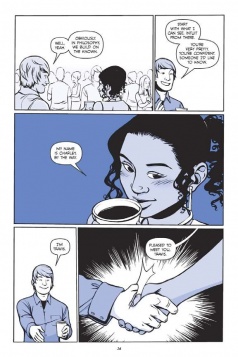 Natalie Nourigat’s artwork is the true selling point of this book, however. Here’s the thing about comic books and graphic novels: while other mediums can explore these types of stories, in a comic book these stories are able to take on a completely different life. There are no actors or actresses and there’s no imagination needed either, as all of its displayed on the page in a unique fashion. It’s something that really can’t be stressed enough; Nourigat’s an incredibly underrated talent in comics, and it’s wonderful to see her get to explore a world and its inhabitants across a much larger scale than we’re perhaps used to with her work. “A Boy and a Girl” features a very focused environment, and in this setting Nourigat is allowed to show off her skills in a much different way. While she’s more known for her cartooning, her understanding of the ticks and movement needed to make an engaging narrative are on full display.

As such, it’s through her artwork that we really are able to connect with Travis and Charley as real people, not just characters in a story. Nourigat brings an incredible amount of charm and personality to these characters that allows us to appreciate their situation and find their appeal with great ease. Charley especially becomes all the more real despite her circumstance, and Nourigat hides her differences in a very human exterior; throughout the book the characters move and react with ways that feel personable. Nourigat excels at the foibles present in personality that seek to define us in unique ways, and as such both Charley and Travis are designed and displayed in a very affectionate, affable way.

If anything, the book is perhaps best described as what Before Sunrise would be like if it were a Janelle Monae concept album. That may seem like a somewhat esoteric description, but it fits rather aptly. Throughout the book, there’s a good amount of rhythm and lyricism to it that is undeniable, all wrapped up in a story about how one evening of philosophy and personal interaction/dialogue can be life-changing. The nature of the sequential storytelling create a bit more of an intimate experience than a film or an album can, though, and while “A Boy and a Girl” is perhaps a tale as old as time, it’s presented in a passionate narrative that makes it still worthwhile.