Ripped from the pages of “Squadron Supreme” comes “Hyperion!” This is one of Marvel’s more unexpected books of the moment, and the Superman analogue gets even more Americana-heavy, with an initial arc involving a truck and a runaway. Keep reading for our spoiler-free review. 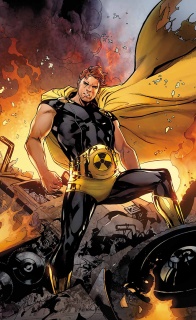 HYPERION IS BACK! Or is he? The high-powered hero is hiding in plain sight, driving a truck across the U.S. to learn about the country he has adopted. Along the way, he picks up a lone runaway named Doll, who has more baggage than he anticipated. Doll is in danger, chased by a pack of freaks and lunatics known as THE CARNIES. Will Hyperion reveal himself to save her? Maybe! Will he use a tractor trailer as a baseball bat? Probably!

Both DC and Marvel have their share of analogues to each other’s companies, but Marvel really doubles own on them at times. The most notable of these is Hyperion, who is a SIABN – Superman in all but name – an embodiment of the physical specimen, and ideological giant that is Superman. He’s been used in Jonathan Hickman’s “Avengers,” most recently, as just that – the last survivor of a universe that is here to do good. That is the same role that Wendig and Virella place him in here, although they are drawing from a very different Superman story than Hickman was.

The most obvious parallel here is the J. Michael Straczynski plotted “Grounded,” where Superman decided to walk across the United States to get a better understanding and appreciation for what this country was all about. While Hyperion isn’t going to be playing basketball with anyone (at least not yet), he, too, is traveling the country to get a better sense of his new, adoptive home. As a truck driver, he is taking on an iconic, blue collar job, and is set to encounter about as hardscrabble and salt of the Earth folks as exist in comics, one would think.

Except that, in this issue, he doesn’t meet a farmer, or a school teacher, or a truck stop waitress – he meets a runaway from a carnival – a carnival, we find out, that is more than it seems. While the carny is another time-honored trope, it isn’t exactly the quintessential American we might expect. This both plays into the book’s strength and takes it a little off-brand.

Doll, as she is known, is a mechanic for the carnival, and seems like she’s in a great deal of trouble. She’s trying to escape, and she pegs “Marc” as the truckdriver calls himself, as the way out. The book doesn’t go into detail as to how Doll figured out that a random truck driver is Hyperion, and that’s one of the real faults of this issue. It is clear that she needs a hero, but we are given no ideas or information as to how she solved this puzzle. Could it be dumb luck? I guess, but any explanation is better than none. Perhaps future issues will get into that, but it seems like this is the optimal place for such a discussion.

What does work quite well on this issue is the artwork from relative newcomer Nik Virella. She sets the book firmly in both the fantasy of Americana and in the hellscape of a twisted carnival, and does so without too much friction between the two categories. The scenes at the truck stop, or in the big rig, feel like they could be from any Smallville-set scene in a Superman comic. But once the night falls, the book takes a nightmarish turn, where every corner has a menace, and every opportunity is a trap.

This section of the book works slightly less than the prior, if only because ‘the Family,’ the name of the carnival folks, are such broad cliches at this point. They drive insane looking vehicles and each person looks like a character from House of 1,000 Corpses. On a purely visual and menacing level, it works. I’m also not one to typically come down hard on a comic for doing broad, comic book things. It is just that the execution of those ideas is a little off. Doll briefly explaining the Family, for instance, would have gone a long way.

That said, there is a character who is described as being “full of bees,” and is drawn as a clown that is literally hiding bees in her costume. If that isn’t the most terrifying thing you’ve heard today, you might want to rethink your life choices.

While the book, overall, is a fun read, it also has the feel of a spin-off that no one really asked for; sure, Hyperion has his fans, but was “Squadron Supreme” really not the best place for him right now? If Marvel really committed to new books, that would be one thing, but with their recent practice of stealthy cancelling of books, I just don’t see a world where this goes more than 8 issues. And, from a macro level, that’s absolutely fine. If there are six issues worth of story to be found here, ultimately, it doesn’t matter if they come as a miniseries or an aborted ongoing. What strikes me as odd, however, is that Hyperion, the character, isn’t given much to do here. And I don’t mean that he doesn’t use his powers until late in the issue – this isn’t his story. It’s Doll’s.

And while Doll might turn out to be America’s sweetheart, that’s not the book I’m being sold. At a time when DC’s Superman books have been anything but traditional, Marvel had a chance to do their own version of Superman. Instead, they’ve chosen to focus on a character most reminiscent of Fenix from “B.P.R.D.: Hell on Earth,” but strip her of her powers and urgency. Doll is a damsel in distress, and Hyperion is her knight in shining armor. And while that might turn in a good story, it doesn’t seem to be delivering a great one.

Final Verdict: 6.5 – A solid, if slightly underwhelming, start to the new series.