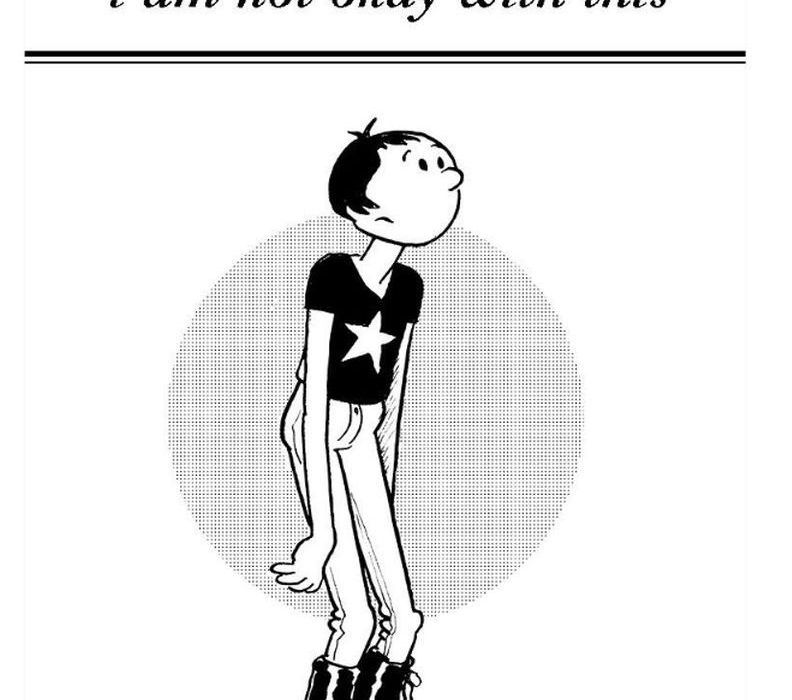 This is a bleak book. In some ways, there isn’t anything else to say about “I am not okay with this” because the bleakness is so pervasive and oppressive as to almost override every other artistic element. This atmosphere might be appropriate for this story that is fundamentally about the virtues of suicide, but the resulting product is too one-note. It aggressively refuses to entertain the discussion of alternatives or even take a step back from the pain of its own narrative. And that is probably the point. 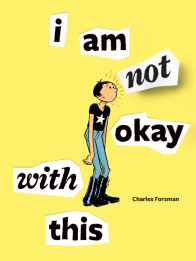 Cover by Charles Forsman
Written and Illustrated by Charles Forsman
Sydney seems like a normal, rudderless 15-year-old freshman. She hangs out underneath the bleachers, listens to music in her friend’s car, and gets into arguments with her annoying little brother — but she also has a few secrets she’s only shared in her diary. Like how she’s in love with her best friend Dina, the bizarre death of her war veteran father, and those painful telekinetic powers that keep popping up at the most inopportune times.

Sydney, the point-of-view protagonist, isn’t all that different from other teens in her social group. She struggles with her self-image, her family situation, her still-shifting sexuality and the social pressures that are associated with the rest of the problems. She also has some kind of psychic ability that she doesn’t understand or control. Over the course of the book, she grows increasingly isolated from her friend group for one reason or the other, and starts using drugs and sex to help cope with her lack of meaningful contact.

The narrative elements seem to be in sharp contrast to the cartoony style that author/artist Charles Forsman uses. Sydney is drawn like an emo Olive Oyl and the style has a rounded softness of a “Popeye” strip. But as the story goes on, the style starts to serve as more of a shorthand for the normalcy Sydney thinks she should be feeling, but doesn’t.

As her situation grows more and more depressing, the frames and gutters feel increasingly like little prisons, locking, not just Sydney, but the entire cast into their roles. More and more black invade the panels and the bleak atmosphere becomes tangible, clinging to Sydney in the form of her clothes and rendering her slowly into little more than a thin silhouette. So the toony, funny-pages style starts to feel more and more subversive; an unsubtle reminder that things can look nice while still being awful.

Forsman’s subversion aggressive take on uncomfortable subjects are pretty well documented. I mean, his last book (The End of the Fucking World) presented the adolescent emergence of a literal sociopath. “I am not okay with this” focuses more on the ideas of PTSD and suicide, and our societal inability to address them. Sydney’s father is dead at the onset of the story, and we eventually learn that he was an Iraqi war vet suffering from PTSD. In a perverse way, Sydney ends up inheriting her father’s mental illness when she uses her powers to assist him in a suicide attempt. All of which is missed by both the adults in her life and her circle of friends, either because of their own pain and struggles, or what could best be described as an unhealthy focus on grades over student health.

So, Forsman’s message ends up being that suicide is sometimes the only answer. Which… is a problem. Up until this fall, I was an educator at a small private high school. I have a very vivid memory of a faculty meeting we had last spring concerning the release of the Netflix series Thirteen Reasons Why and the possible impact that show could have on students and their families. While this kind of response is probably not the norm, it’s difficult for me to read a work like “I am not okay with this” without wondering why there wasn’t some kind of competent support system. There’s a page where Syd goes to talk with her school counselor and gets yelled out of the office because her grades aren’t improving. Forsman’s picture of high school is more than just cynical, it’s soul crushing.

And as much as I hate to admit it, it’s also why the book is compelling. For a teen, even when the support structures are there, it can be very easy to become sucked into the feeling that everything is hopeless. That no one understands you. “I am not okay with this” gains credibility from that perspective but also gets reduced to a piece of pure pathos. There are no solutions, no arguments and, most depressingly, no hope. Which is not to say that every story needs to be progressive. Just that this one isn’t, and that more than anything else is what makes it feel so very bleak.

There is one other element that bares touching on. Sydney’s powers are a strange include in what is an otherwise completely mundane comic. They feel ill-defined at first and then seem to shift into personifying her mounting PTSD. But and the end of the book, I started thinking they might be something a little more pointed, given Forsman’s subversive track record. Now I think they’re a metaphor for guns. The vast majority of gun deaths in the United States are suicides or accidents, and many are associated with untreated mental illness. The existence of Syd’s power as something that only ever is used for violence starts to lens how she solves problems. When she sees that she can end her father’s pain with the equivalent of a gunshot, it’s not a huge leap to ending her own pain the same way.

“I am not okay with this” is one of those books that will stick with you, not because it was good or enjoyable, but because it was disturbing and forces its reader to reevaluate their perspectives. While I don’t think I would recommend this book to anyone, it’s hard to deny the resonance of Forsman’s ideas, bleak and disturbing as they are.