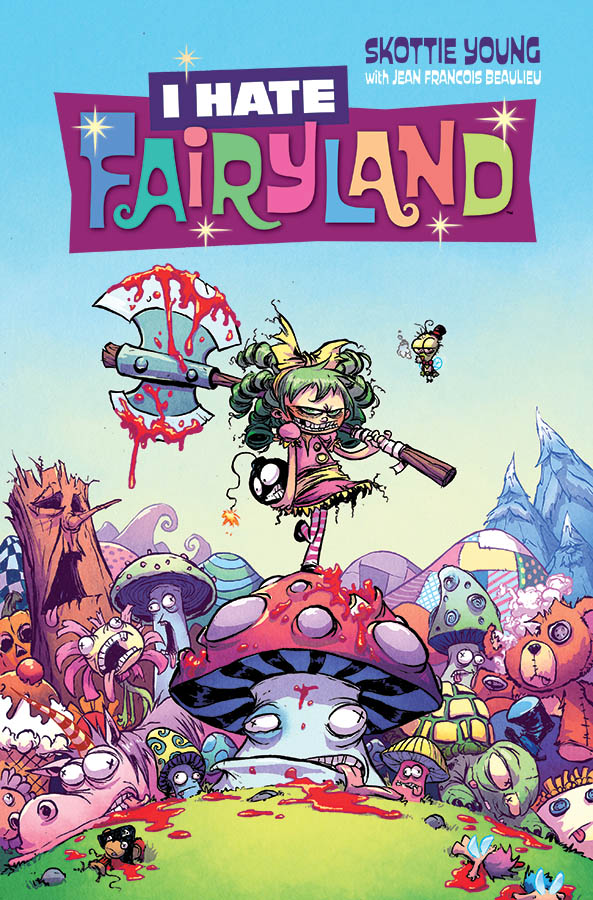 Skottie Young is here to cause a ruckus. His new series, “I Hate Fairyland,” coming in October from Image Comics, is an attempt to balance the extremities of the 90s Image books with the fantasy worlds of Oz and Wonderland. It’s twisted, gruesome, a lot of fun, a bit silly, and overall completely wild. 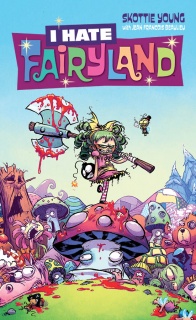 Written and Illustrated by Skottie Young
Superstar SKOTTIE YOUNG (Rocket Raccoon, Wizard of Oz) makes his Image debut with an ALL-NEW SERIES! The Adventure Time/Alice in Wonderland-style epic that smashes it’s cute little face against Tank Girl/Deadpool-esque violent madness has arrived. In an adventure that ain’t for the little kiddies, (unless you have super cool parents, then whatever), you’ll meet Gert-a six year old girl who has been stuck in the magical world of Fairyland for thirty years and will hack and slash her way through anything to find her way back home. Join Gert and her giant battle-axe on a delightfully blood soaked journey to see who will survive the girl who HATES FAIRYLAND!

In the back essay of “I Hate Fairyland” #1, Skottie Young discusses his first experiences with comics. Partly due to his location and the high-numbered issues on any given Marvel or DC comics, the superhero powerhouses didn’t do much for him. (He even admits the irony out of making a career from kiddie versions of the Marvel cavalcade.) Instead, Young connected with the parodies of “MAD Magazine,” the adventures of “Archie” and his friends, and eventually, with the warped world of 90s Image comics. We’re talking “Cyberforce,” “Shadowhawk,” “Spawn,” “Pitt,” “Savage Dragon,” and “Wildcats” over here, books that are more significant for their cultural impact than they are for any sort of quality in their storytelling.

Knowing this actually helps to explain his first creator-owned comic book. “I Hate Fairyland” is like the culmination of everything Young’s ever done, balancing the madness of “Rocket Raccoon,” the gruesome humor of those 90s book he apparently loves so much, and the wonderful, weird world of his Oz adaptations. Quick aside: those Oz adaptations, which Young collaborated on with Eric Shanower, are all stupendous. Marvel has one of their overpriced omnibuses out for the whole, as well as trades for the individual series. They’re well worth checking out and investing in, and definitely one of those rare instances Marvel tried something different.

If anything else, “I Hate Fairyland” seems to be Young’s reaction to his own work on the Oz books. There’s a huge Baum vibe all over this thing, and the story pretty much parodies that other work. It’s the “MAD Magazine” stuff coming in, I guess. “I Hate Fairyland” #1 is bright and colorful, the ironic charm further expressed through the pastel storybook color palette. Young goes full Suessian over here, with distorted architecture and lines zigzagging all throughout the frame. His imagination is absolutely on fire, begging for us to keep up. The story is funny, with Young getting a lot of mileage with cute characters doing heinous things.

The book centers around a little girl named Gertrude, who once, long ago, was suddenly — and brutally — whisked away from her bedroom home and sucked right down into Fairyland. Unlike the typical children’s hero who immediately wants to start exploring every nook and cranny of this new place, Gertrude just wants to go back home. The Glinda stand-in, Queen Cloudia, sets her on a quest, which lasts like thirty years, but with no success. Stuck in an eight-year-old body but still pushing forty, it’s no wonder Gertrude comes unhinged and becomes a sort of breathing disaster zone to Fairyland.

As a first issue, Young is more concerned with setting up the look and feel of “I Hate Fairyland” than any of the actual story. Queen Cloudia is fed up with Gertrude’s presence and decides to send an assassin after her. We’re introduced to a seedy fairy tale underbelly run by the Jabba-like Slug Lord. We watch Gertrude eat the heads of a bunch of mushrooms and start tripping balls. Even if there’s copious amounts of gore and overly complicated weapons, there’s an inherent silliness running through the book, which Young is only too happy to embrace. Young’s willingness to embrace the ridiculousness, I think, helps give this book its life and its twisted charm. He’s not at all concerned with balance — he turns the crazy up to 11 and runs with it.

While we’re given clues about the world, I don’t think there’s enough to tell us what this story is going to be. Are we going to watch Gertrude lead a revolution against Queen Cloudia for some reason? Is it going to be a chase comic where she’s dodging a bunch of assassins thrown her way while she desperately tries to finish her search? Is it a sort of jacked-up travelogue, where, month after month, Young introduces us to a new location which Gertrude causally and disgustingly destroys? The first issue plays with all these elements, but doesn’t exactly settle on a single one. It might be the nature of parody, but parodies have a tendency to run dry very quickly and without a clear direction, the book is in danger of becoming redundant and awkward.

I feel “I Hate Fairyland” breaches redundancy and awkwardness a few times in this first issue. There are at least three instances of Gertrude running for her life after destroying some part of a town. The scene where she blows up the moon and the stars around it lasts forever. Young’s desire to show us so much in 24 pages makes some scenes feel abrupt and undeveloped while others are drawn out past their breaking point. He may be testing the waters to see what works and what doesn’t, but the whole book feels like it could become as unhinged as its central character.

Despite these dangers, I do think it’s a solid book. Skottie Young’s cartooning is always great to look and his excitement about the locations and actions is contagious. “I Hate Fairyland” is big and funny and broad, surprising because who knows what bananas thing Young’s going to throw at us next, occasionally filled with some genuinely clever moments, and packed with great sight-gags. Honestly, the background details are often more entertaining and hysterical than the main plot. Again, watch the moon throughout this issue. I think when Young figures out what he wants out of this, the book will work all the much better and become something you look forward to every month rather than something in the middle of your pull stack that you read, say, “Well, that was fun,” before moving on to the next thing.

Final Verdict: 7.0 – who knows where this story is going, but it’s sure going to blow everything to bits before it gets there.