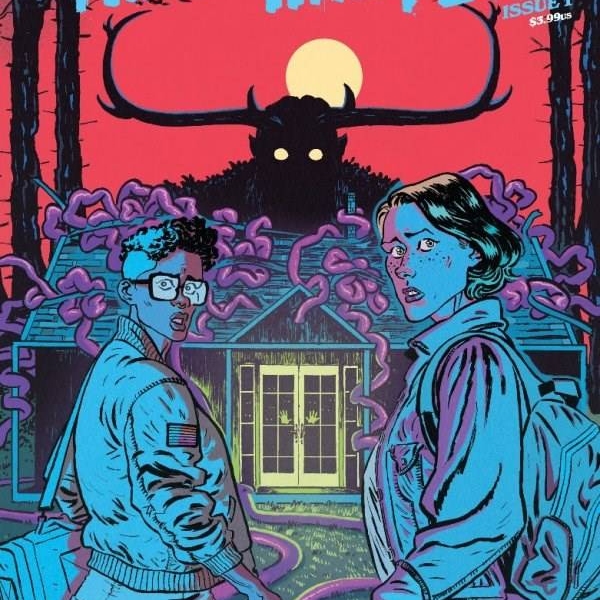 I am not that big of a horror fan. I can respect that it’s a genre that is really open to new and interesting voices, and even I’ll admit that there are quite a few horror movies out there that are fun, interesting, and have something to say, but for the most part I don’t like the massive house of tropes and cliches that the genre has built for itself over the decades. We always know the monster is going to jump out when the music stops, we always know that someone is going to survive, and we always know that you never go into an abandoned house alone, no matter how much of a dumb blonde you are.

With that being said, let’s see if today’s horror comic titled “I Hate This Place” #1 can stand out from a very crowded field. 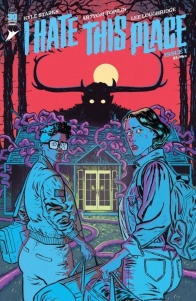 FOR FANS OF GIDEON FALLS AND HOME SICK PILOTS!

After inheriting a farm house, Trudy and Gabby are ready to start the next chapter of their lives together…except it’s already home to a mysterious force that’s attracted ghosts, aliens, and all kinds of supernatural beings for decades.

Now, Gabby and Trudy must play by the “house rules” in order to survive living among the most frightening creatures on Earth in this new series from KYLE STARKS (ASSASSIN NATION, THE SIX SIDEKICKS OF TRIGGER KEATON) and ARTYOM TOPILIN (ICE CREAM MAN PRESENTS: QUARANTINE COMIX SPECIAL).

It’s clear that the creators of “I Hate This Place” #1 have taken the first lesson of comic book writing to heart, because the first three pages open with a real attention grabber. It opens with a group of criminals on the run from their latest score and wouldn’t you know it, they turn on each other. Unfortunately for them, there’s something in the woods that’s meaner and deadlier than a criminal with a gun, and things go south really quickly. The comic then cuts to a couple named Gabrielle and Destiny, who are moving into a cattle ranch that was owned by Gabrielle’s now deceased aunt. However, it turns out that the ranch is home to some pretty spooky stuff and it’s up to two ladies who have no experience running a ranch to try and figure out how to survive, both literally and financially.

Since “I Hate This Place” #1 is yet another horror comic in a vastly growing ocean of them, the creative team has their work cut out for them in order to separate them from the others. What’s interesting is that the script decides to focus on developing Gabrielle and Destiny and writer Kyle Starks does a really good job of making them relatable and interesting. Destiny appears to be a bit of a hardcore survivalist nut who is happy to move to a place that is private, self sufficient, and a home to her small arsenal of guns while Gabrielle is a much more laid back and relaxed person who is willing to let the chips fall where they may. There’s a very real sense that a lot of thought went into making sure the audience saw them as fully fleshed out people with distinct personalities and flaws. It really goes a long way towards making the reader care about what happens to them when it all hits the fan. As for the rest of the book, it does a great job of building the mystery surrounding the ranch and what happened to the previous inhabitants and it leaves just enough mystery to keep the reader engaged enough to want to see what happens next.

While “I Hate This Place” #1 does a great job of setting the reader up for the mystery and horror that is to come, it does feel like there are a few pacing and plotting issues. While Starks does a great job of establishing character and setting up the supernatural threat, he spends so much time doing it that it takes up a huge chunk of the rest of the book. This means that the broader plot does suffer a little bit. Case in point, the actual mechanics of running the cattle ranch is left to the last couple of pages, which actually ties back to the very beginning of the book. While it will probably be addressed in future issues, it feels tacked on and kind of pointless, which is a fairly substantial flaw in what is otherwise a great book.

The artwork for “I Hate This Place” #1 is provided by Artyom Topilin with colors by Lee Loughridge and it is a definite highlight of the book. Topilin has a minimalist style that looks like it would be more at home in an underground comic book from the 1980’s, similar to something Art Spielgelman might have drawn but not as hyper detailed as someone like Crumb. While Topilin plays loose with the character’s proportion and skimps on the background details, it gives the book a unique character and feel that is very pleasing to look at. However, Topilin’s artwork combined with Loguhridge’s monochromatic color scheme really comes to its own when it comes time for the supernatural imagery to hit the fan. The comic makes heavy use of motion blur, ink streaks to create the impression of heavy shadows, and the shifts in color scheme all combine to create something that looks like it would make an amazing black light poster that puts the reader on edge and really drives the point home that there is something very wrong happening here.

“I Hate The Place” #1 is a comic that understands the tropes and cliches of its genre and instead of trying to deconstruct or change them, focuses on creating the most engaging story it can create. It’s got a great pair of leading ladies, it’s got an engaging set up that creates enough mystery for future issues, and it is a gorgeous book to look at.

Final Verdict: 7.9- While the plot is shoved to the side a bit in the name of character development, there are some great characters with some really effective horror imagery and gorgeous art.