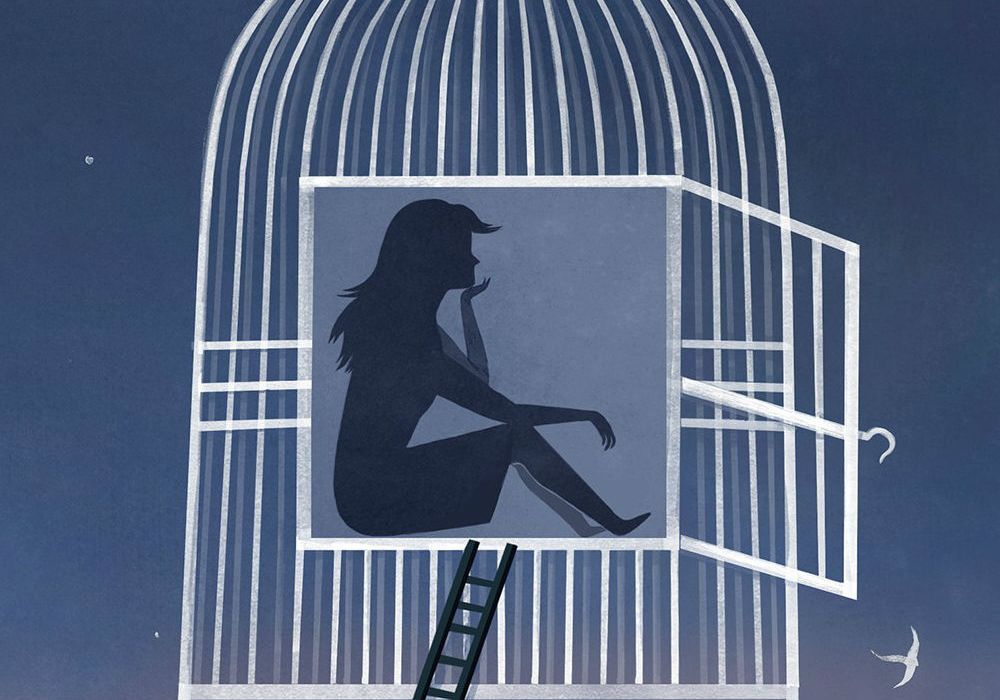 “I, Parrot” is aggressively charming. From the simple but expressive figures to the watercolor textures to the agile and clever dialogue, the whole thing seems optimized for maximum charm. This could easily be a criticism of a lesser, more twee work, but somehow it manages to make the whole package relatable without sacrificing the emotional impact of a woman in the midst of a custody battle. The result is something liminal, embracing the absurdity of life, while also addressing one of the touchstone issues of our culture: “What is a family anyway?” 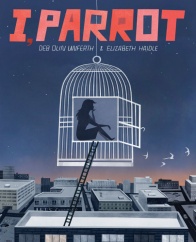 Cover by Elizabeth Haidle
Written by Deb Olin Unferth
Illustrated by Elizabeth Haidle
When Daphne loses custody of her son, she is willing to do whatever it takes to get him back–even if it means enlisting the help of the wayward love of her life, a trio of housepainters, a flock of passenger pigeons, a landlady from hell, a supersize bag of mite-killing powder, and more parrots than she knows what to do with.

I, Parrot, by acclaimed author Deb Olin Unferth with stunning illustrations by artist Elizabeth Haidle, dips into the surreal with poignancy and humor. In this riveting, funny, and tragic graphic novel, Daphne must risk everything. Her quest is ultimately a tale about civilization’s decline, the heartbreak of extinction, and the redemption found in individual revolution.

Daphne is a single mom struggling to stabilize her life enough to win back join custody of her son from her abusive and formerly alcoholic husband. Getting in her way is the fact she is a remarkably unlucky woman living in a time when stability is a luxury. This all too familiar backdrop sets up a series of increasingly unlikely events involving 42 rare parrots and a house-sitting job from hell. It’s the kind of story I could see as a Pixar film: sad and quirky but ultimately uplifting. Or at least cathartic.

Author Deb Olin Unferth brings a witty sharpness to the story, relying on narration punctuated with staccato dialogue to keep the story moving at all times. It isn’t an aggressively fast text, but there is a don’t-blink-or-you’ll-miss-it energy at times. The textual momentum is complimented by some very clever layout work by artist Elizabeth Haidle, who makes brilliant use of gutters, borders and other constructed white spaces to give the narration a sort of visual omnipresence. Daphne’s voice never feels far away from the action.

Haidle brings more than just design expertise. Her simple, crisp grayscale images set the tone for the story: a dreamlike softness evoked by the mid-20th century modernist cartoon figures, overlaid with the textural complexity of watercolor, but stripped of color. In spite of the gauziness of this style, it never struggles to convey the emotion. In fact, it might have a bit of an opposed problem where the characters aren’t actually memorable beyond their emotion from panel to panel. Daphne in particular appears to be more or less perpetually upset or angry.

There are places where these emotionally broad stokes start to lack authenticity, but are ultimately saved by Unferth’s prose, and in particular, her dialogue. The latter half of the book is carried by the rapid-fire interactions between Daphne and both her boyfriend, and her son. While both of these characters also suffer from the same emotional one-note-ness as Daphne, the pacing of the dialogue, and the delightful heist action of the final act, keep the problem to a minimum.

The book ends up drawing out the best of both of its creators, the strengths of one covering for any minor weaknesses in the other. This isn’t an uncommon phenomenon in high quality graphic novels or comics, but it is a rare thing to see in a book as dynamic as “I, Parrot.” Dynamism is a hard quality to capture in a review like this, but the sheer diversity of page layouts and the creative use of narrative text are a pretty good starting benchmark.

For all of these strong compositional elements, “I, Parrot” wobbles a bit. The custody situation laid out in “I, Parrot” will be all too familiar to some readers, and yet Unferth’s story never manages to feel truly real. The narrative is riddled with little logical hiccups. Tiny, niggling things that bloom into bigger questions on repeated reading.

I keep finding myself coming back to Pixar, and Inside/Out in particular. Both Inside/Out and “I, Parrot” are defined by their verbal wit and superior visual design. Both ooze charm from every scintilla. And both are somewhat weaker on repeated viewings as your mind starts asking questions and finding little hole to pick at. And that’s most likely because neither of these stories is designed to be taken at face value. Both are complex allegories for real emotional journeys and both use their superior design elements to help us get past the logical inconsistencies resulting in the translation of metaphor to narrative.

Sure, the entire plot of “I, Parrot” could be unraveled by Daphne making a single, responsible phone call to her employer about bird mites, but ultimately, the story isn’t about that. It’s about coming to terms with life and finding a way to fight back against Shakespeare’s ‘slings and arrows of outrageous fortune.’ Whether through the touchstone of your family, or the little acts of rebellion allowing you to feel free, “I, Parrot” message is one of finding that answer for yourself, however you end up getting there.