Humanoids have long been known for publishing hyper-weird European sci-fi tales and other similar comics, all to largely critical acclaim. However, they’ve decided to jump on board the American superhero bandwagon, and with none other than the fan-favorite super-scribe himself, Mark Waid. Can this book stand up to the heavy hitters on the market? 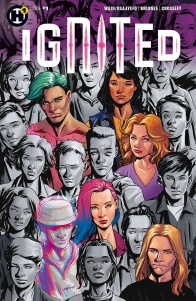 Welcome to the H1 Universe and Ignited, Humanoids’ first ever ongoing super-powered series-brought to you by an explosive team: writers Mark Waid (Kingdom Come) and Kwanza Osajyefo (Black AF), and artist Phil Briones (Aquaman), with covers by John Cassaday and Yanick Paquette! It’s the first day back at Phoenix Academy High, but this year there’s no back to school excitement in the air as returning students and faculty are haunted by memories of last year’s horrific attack. So many friends and colleagues were lost, and some of those who survived underwent changes; they Ignited, gaining supernatural abilities they barely understand. Little do they know this is just the beginning!

Waid and Osajyefo establish this as a super relevant and interestingly urban-styled debut. The issue opens with a school shooting still fresh in the memories of the students and teachers, already making it contemporary and relevant considering this sort of thing happens quite regularly in America, with Waid and Osajyefo offering their commentary on the situation. What’s different here is that we see the ramifications of the shooting immediately play out in the comic, with how the students protest. The students and their families are told that teaching staff will all be armed from this point on, which is the main point of contention for this comic. From one simple idea, so many plot points spiral out. We see students become more uncomfortable with this idea while others rally behind it. We also see students’ parents’ reaction, which is mostly positive, to the point where one overly militant family brings in a veritable army force to contribute additional protection for the students. The most important reaction, however, is the anarchic, almost guerilla-tactics styled student group made up of quasi-vigilantes @viral and @wave. These two feel like a thoroughly modern-day reaction to an event like this, rather than simply injecting old fashioned super-heroics into the fold.

All these ideas are great and super engaging to read, however, the dialogue and characterization is stilted at times and feels a lot like it was written by well-meaning but out-of-touch writers. For starters, we are poorly introduced to our protagonist Anouk, who’s narrations is spotted through the comic to ground us, but we’re only given her name once. Additionally, in most of her appearances, the narration or page/panel structure never match up enough that we can clearly tell which student it is coming from. What Waid and Osajyefo give us of her narration is at least solid, with her personality being that of a contemporary rebel-type, who is also something of an outsider at school. Outside of Anouk, we get a kind of collective support cast in the rest of the students. Most of them are largely bland and one-note, and dialogue like “THAT WAS LIT” and “OKUUURT” (please don’t ruin Drag Race for me) is especially disengaging.

Artist Phillipe Briones does mostly solid work for this issue, especially considering the huge cast in the school he has to work with. At least visually, characters all sport individual sense of fashion and physical attributes, from the green-haired, hoodie-toting “jerk” in the first few pages, to Anouk’s own hasty up-do/hairclip style that suggests she might have an overly hasty or fidgeting nature. I love the look of @viral and @wave here too, they combine a sensibility that lends from modern-day street style and psychedelic, ’90s Vertigo era “superhero” costumes. @wave specifically has a TV static-like design that plays in well with the narrative, allowing for a neat twist at the end that reveals the nature of his being to be extranormal. This fusion of design ideas feels fresh and feels like “Ignited” #1 is genuinely bringing something new to the superhero table.

One thing to note with Briones’ composition style is that it’s super busy. This can be a positive attribute or something of a detriment depending on the tone of the scene. In the opening, where journalists are swarming the grounds and interviewing students on their experience with the shooting, the masses of people feel appropriately claustrophobic. We get a sense of the overwhelming feeling that Anouk and the rest of the students would surely be going through in the wake of such a traumatic event. It’s then surprising that regardless of how well Briones handles structuring these highly-populated scenes, the shots with just under five people in them feel as busy and uncomfortable as the others. This is largely due to the face-level, rather close-up camera angles and the architecture of the school feeling narrow during these shots. When Anouk and her friend walk alone down a corridor, it doesn’t like wide enough to comfortably fit one more person alongside them, let along the scores and scores of people that were evenly spaced in the prior scenes. It makes the quieter scenes feel a little crowded, and the lack of solid continuity with the corridor space is again, disengaging.

Colors here are bold, solid and bright, looking like a good mix of camp, Hollywood and classic superhero palettes. The texture of the coloring has a nice, soft-blended airbrush shading quality, which gives just enough realism to ground this in the real world yet looks animated enough to remind us that this is a superhero story at heart. There are a few heavily contrasted shots scattered throughout the issue, mostly to show us the traumatic shooting event, that colorist Andrew Crossley juxtaposes to great effect with the rest of the issue. There’s also a great, heavily ironic contrast in the scene where Luther’s militant family come marching through the school. The narration is preaching heavy doomsayings like “This is lightyears away from normal” and “Whatever this is, this is really bad!” whilst Crossley shines a patriotic, lens flare against the force’s naturally posed silhouettes, giving them a heroic quality. It’s clever storytelling that uses colors that work purposefully against the narration to tell a more layered story.

“Ignited” #1 may not be the most graceful of superhero universe debuts, but it has a lot of strong ideas and solid art direction. Waid and Osajyefo have some super-modern and relevant ideas that are unfortunately executed to fleeting success. Briones handles character design and high-population scenes remarkably but can make some shots too crowded and small at other times. This may be something of a mixed bag, but there’s still a glimmer of hope for what this could bring in the future.

Final Score: 6.2 – “Ignited” #1 kicks off the new Humanoids superhero universe with a shaky but well-meaning debut.