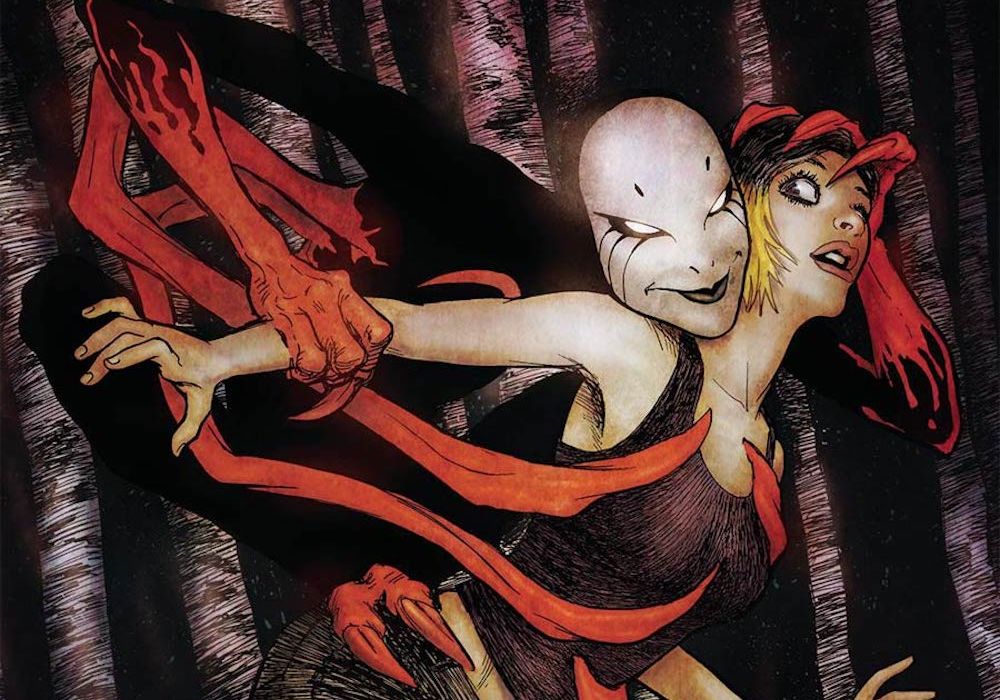 Growing up is nothing compared to the horrors of an imagination over the course of ‘The Cat’s Paw,’ the first (and so far only) arc of “Imaginary Fiends.” 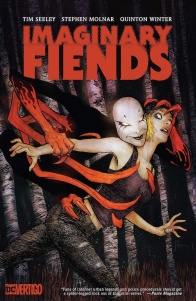 “Polly Peachpit.” Those were the words 10-year-old Brinke Calle said when she was found covered in her own blood by the woods in rural Cannon Falls. Her best friend, Melba, had just attempted to murder her because a spider girl named Polly Peachpit told her to. Since that day, Melba has spent seven years in a mental health facility. Tomorrow is her 18th birthday. Tomorrow she’ll be transferred to a federal prison. Tomorrow her real sentence will begin.

That is, until she receives a visit from FBI Agent Virgil Crockett. Crockett explains that there is another world beyond ours, where hungry, spectral aliens stalk the minds of the impressionable and weak. These things, called IMPs (Interdimensional Mental Parasites) feed on compliance. They convince hosts to do things for them, and the more they feed, the stronger they become. More IMPs stream into the world each day, invisible to everyone but his or her hosts.

From the outset of its sole arc, ‘The Cat’s Paw,’ “Imaginary Fiends” is about two key themes: responsibility and trust. Tim Seeley is no stranger to these themes, having used some variation on them in his other creator-owned works, but here those elements are truly essential to how the supernatural elements of the series interact with the mundane. From the relationship between IMPs and their hosts to that between our two central FBI agents, questions of agency and reliance follow through the entire narrative.

In Melba Li, Seeley has a very different narrative than he us accustomed to telling through his creator-owned properties. Unlike his various hunter or seeker archetypes, Li has absolutely no skill in combating her foes, relying heavily on her “imaginary friend” in spite of their shared sordid history to keep her safe. Furthermore, while Seeley does put her at the core of the story, her motives are rather selfish, her main asset being her status as an IMP host rather than her skill as an agent or moral high ground. To take a cue from The X-Files, she is an intentional “Fox Mulder” agent, albeit one who is not entirely aware of how her world operates.

If Li is the Fox Mulder, then Virgil Crockett is the Dana Scully, himself with some adjustments. Seeley uses Crockett to examine the mind of someone who is altogether too straight-laced for the imagination-heavy world of IMPs, someone with knowledge of how the world works, but an inability to truly grasp it. In essence, while this Virgil does lead Melba’s proverbial “Dante Alighieri” into a kind of hell, “Imaginary Fiends” demonstrates the difference between knowledge and experience, and how both of these elements can be important to work in tandem.

In fact, the dual themes are even important to the IMPs themselves. When a being is intricately tied to a human psyche, when it feeds on their imagination, can it truly be considered evil? How much can be attributed to the parasite, and how much to the host? Is it really the fault of a monster, or of the person who thought it up in the first place, or some combination between the two?

Some of the terrors seen are not integral to any particular character’s struggles with the IMPs, but can be much more personal. From a harrowing experience with alcohol to difficulties opening up between the three partners (one of which is, through some serious black comedy, having to be translated by our resident host as tactfully as possible), there is a surprising amount of “real world” drama going alongside the psychological factors involved in the eponymous “imaginary fiends.” The feeling of being hunted or helpless, of being incompetent both despite and on account of experience, of needing to both trust and be wary brings together Seeley’s emotional roller coaster of a script.

Stephen Molnar’s illustrations give a macabre life to this story, utilizing a variety of techniques to heighten the tension, the mystery and the intrigue, as the various characters fight both within and without over conflicts both inherently tangible and based in imagination.

Variable perspective shots enhance a feeling of unease, ranging from a slow pan over to see an extremely violent scene to a shocking reveal of such horrors. From the initial reveal of Polly Peachpit to the unveiling of murder scenes, reality and fiction blend together so well that it is easy to get into the mind of an IMP host, just as it is simultaneously easy to ignore them as hallucinating when viewed from a comparatively normal perspective of random passersby. These shots are also useful for examining the thought process of our characters, from a profile view at Li to enhance her look of despair to a view from below to grant further unease when faced with either a disturbing moment or an especially violent antagonist, or at times even both.

By the same token, perspective helps to get into the idea of a police procedural in and of itself. Using overlapping panels and a structure that is at times tilted or otherwise out of focus, Molnar is able to draw readers into the clues and the labyrinth-like nature of an intensely focused agent’s mind while on a case.

Even that stellar artwork would be incomplete without the thoroughly creepy colors provided by Quinton Winter. From cool blues to violent reds to disgusting greens and anything in between and beyond, the palette makes for an overall air of emotionally diverse scenes and moods, from the most traumatizing encounters to calm, quiet nights and more. The colors are especially effective around the interdimensional mental parasites themselves, with glowing yellow eyes or splashes of slick blood, with enough variation in hues and shades to make for what appears to be equivalent to a very bad drug trip.

Together, this creative team has made something truly interesting, leaving open plenty of room for more to come.

Final Verdict: 9.0– Finally released as a complete volume after its completion as a miniseries from 2017 to 2018, “Imaginary Fiends” melds together elements of The X-Files and tales of imaginary friends or urban legends into a very compelling supernatural police procedural.