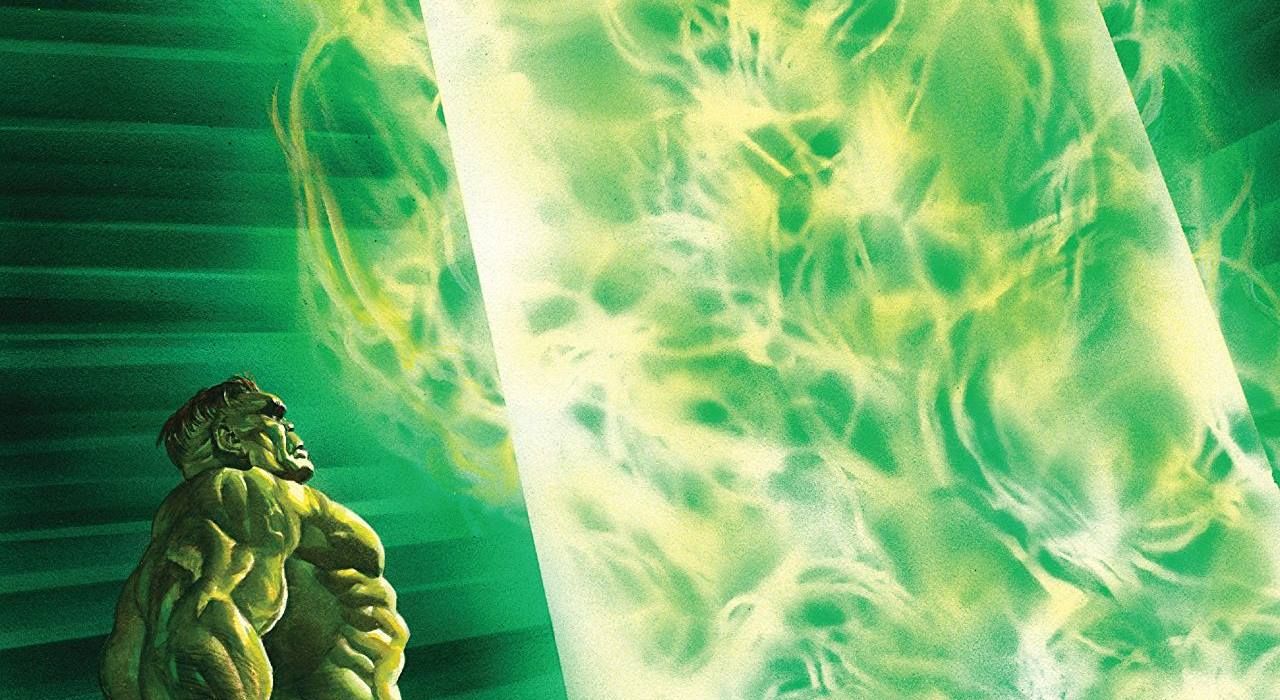 This comic had the Hulk rip out the Absorbing man’s spine and skull out and then beat him with it. 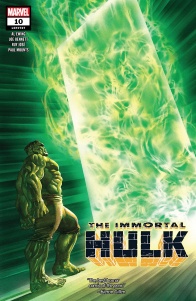 Gamma Flight was too late. Shadow Base is infiltrated. Crusher Creel is damned. And the One Below All walks upon Earth. Now, in the place he was born, the Immortal Hulk is the last thing standing between the world of the living…and the GREEN DOOR.

Oh you’re still here? I thought that would really say it all. I guess I could tell you a bit more about the issue. Let’s see…

“Immortal Hulk” added a wrinkle to the premise of “Hulk.” You can kill Bruce Banner in any manner of weird ways, but come sundown the Hulk will always come back. This has been used mainly to tell one-shot horror comics in the old-school style of EC. Banner will arrive in a place, find out something freaky is up, die, return, and exact terrifying vengeance on the wrongdoers. While each issue has been self-contained, there have been a few recurring elements to guide us through. Reporter Jackie McGee has been following the Hulk since the first issue. General Fortean has been dogging the Green Goliath. And something… weird has been following him too. This is the issue where all of that collides.

We last left Hulk battling the Absorbing Man at the site of the original gamma bomb that gave him his powers. Ewing’s take on the Hulk has been a little bit more mythic than you may be used to. This could have felt like a big dumb retcon, taking the science accident of the Hulk and blaming things on the devil. But no, Ewing writes the new developments with subtlety. Gamma energies come together to “open the green door,” and when that happens well, it’s bad.

When I say that all the threads are coming together, I mean it. This was the least self-contained issue in the whole series run. Hulk and Creel exchange punches and gamma blasts, Alpha Flight (I’m sorry, now Gamma Flight) unite with Jackie to track down the Hulk, General Fortean sends Bushwacker the living gunman to take out the Hulk, and the mysterious visions that have been plaguing Banner come to pass. It’s a very different issue than any in the series so far, and change is hard.

But not bad. If this isn’t the endgame for “Immortal Hulk,” it sure feels like it is. Every story hits a climax all at once, and with the twist on the last page, it’s hard to imagine Ewing topping this. Joe Bennett leads a sizable art team tasked with drawing the impossible, and they deliver. The gory, freaky, unbearably upsetting punch-em-up takes the bulk of the issue, and damn if I’ve never seen one like it. Bushwacker has a singularly weird power (turning his limbs into guns) and it looks as horrifying as you fear. Energy crackles like in a Kirby comic, but Kirby never had access to these digital finishes or the glorious colors Paul Mounts is bringing. Impossibly bright beams of green energy light up a red hellscape and it looks awesome.

“Immortal Hulk” is easily Marvel’s best surprise of the year. Ewing has been rewriting the rules of comic book pacing, and if the industry has any sense (that’s a big if), this will become the new standard for writing. Bennett knows his business and draws crap you can’t believe he’s allowed to get away with. He also makes a great use of negative space, framing simple close-ups and turning them into something a bit more cinematic. Every issue of this comic has been solid gold.

Taking a second look, this may be the weakest issue of “Immortal Hulk” in the entire run. Where other issue are self-contained, this one is incredibly busy. While previous issues required little knowledge from the reader, this one draws together every element of the series so far.

But actually, by going against what has made the series tick so far, “Immortal Hulk” #10 strips the concept down to the bare essentials. The team, especially Ewing, is at the top of the craft and this series is something special. When best of the year lists start coming out, “Immortal Hulk” is going to be on everyone’s list, even people who typically eschew superhero fare. Even without the elements that make the series special, “Immortal Hulk” is still playing in a league beyond all the other books.

Perhaps then I’m being a little unfair. After all, what’s the point of weaving together such a carefully crafted story if it’s never going to pay off? Whether or not we get one more arc or one more year or ten more years of this series, we’re reaching the end of a major act of a story. It’s time for things to get a little messy and to let all the simmering plots erupt into gamma infused chaos. And yo, did I mention that the Hulk rip out the Absorbing man’s spine and skull out and then beat him with it!?

Final Verdict: 8.1 – Immortal Hulk sets up the pieces on a mess of a board for the most epic story yet.