“Immortal Hulk” #22 is a breather for the characters in the series but keeps up with the forward momentum. Warning: spoilers ahead. 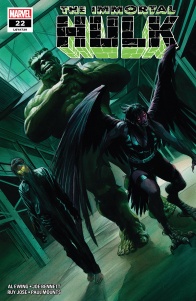 Shadow Base has one goal: to stop the monsters, the forces of chaos – And give their power to men of order. But the monsters have goals of their own. And now they’re working together. RICK JONES remembers everything… and you wouldn’t like him when he’s angry..

“Immortal Hulk” is a comic series that does not stop, however “Immortal Hulk” #22 slows down just enough for us to catch our breaths with the back to back big events that this break out horror superhero comic has given us. Al Ewing, Joe Bennet, Ruy José, Belardino Brabo, Paul Mounts, and Cory Petit give readers of this series a chance to check in with the cast of characters in this series before hopping onto the next big thing.

Al Ewing flexes his chops at writing dialogue with “Immortal Hulk” #22 but the spectre of horror remains all throughout the book but its balanced with a sense of humor this issue. For instance the issue starts with Walter Langowski’s corpse with the speech bubble saying, “No change. Walters still dead” which hangs a lampshade that in superhero comics no one stays dead and in this superhero comic with gamma immortality and the main character having his heart ripped out two issues ago definitely no one stays dead.

“Immortal Hulk” #22 is split between three main conversational scenes between Fortean and his team, Gamma Flight gearing up to take the fight to Fortean, and Team Hulk on the run. The primary force in the Gamma Flight discussion is one of leadership with Puck taking the lead. Fortean gets a scene with Dr. McGowan reacting as anyone would if their boss put himself in the body of a creature called the “Abomination” with hands for a face and bleeding green blood. Which is to say not well. In that scene Ewing really leans on both the humor and horror of the absurdity of the situation. Fortean’s face just sticking out of the huge figure of the Abomination while McGowan goes off with how tests need to be run is so absurd that it is funny. However the horror remains with Fortean insisting his control despite obviously being way over his head. Bennett and the art team depict that line between humor and horror with two consecutive panels giving a set up and punch to the aforementioned green nosebleed control moment and the more menacing moment of Fortean’s face hands closing in with a gross “clack” by Corey Petit on him claiming his new body as, “My weapon”.

A great deal of time is given to Hulk’s motley crew of Betty, Banner, McGee and the very rough Rick Jones. Ewing gives readers a lot to chew on with these pages. Bennett and company switch out the layout of a mostly six panel grid to high concept comics’ darling, the nine panel grid. The first page of this scene has a gruesomely rendered Rick Jones in the fetal position in a motel bathroom with a human Betty Ross keeping watch and only letting out small sounds. What is interesting is that Betty’s monstrous Red She-Hulk answers Banner’s knock at the door which may indicate more comfort in this form for Betty. Banner gets just a little page time before realizing he’s getting nowhere and Joe Fixit takes over.

Ewing through Joe takes us to check in on Jackie McGee, a still incredible adaptation of the Hulk’s adversary from the old “Incredible Hulk” television series. McGee gives us an explanation that the Hulk goes off on his own explaining some of his guest appearances in other books. Joe and McGee unpack all of the Hulks’ relationships and admiration for McGee leading to one of the best moments of the issue with Joe Fixit saying “trans rights” which is extremely important for mainstream comics to address.

McGee is such a fascinating character in this series because as a Black woman and a journalist she gets to be a really unique lens to explore themes of rage and anger in a different way than the usual Hulk comic. This continues in this issue with Joe Fixit giving her props by saying standing up to all of the hate she gets online makes her far from one of the puny humans that Hulks oh so love to smash.

The moment is interrupted by the art teams biggest flex by smashing that nine panel grid with a double page spread where Joe Bennett and inkers Ruy José and Belardino Brabo and colorist Paul Mounts remind us that we came for a horror comic with the gamma glowing body of Rick Jones pointing Team Hulk towards the next big thing in this comic.

Below Groom Lake is where the General Fortean’s anti Hulk team are waiting for a vengeful Gamma Flight in a great moment. When all seems dire, Corey Petit really snaps in this two page sequence with the growing black “Boom” in each of these nine panels to a “Boom” that is so loud that it is only the white outline and takes up the majority of panel and leads to the final page pays of the subtle knock knock joke motif with the green goliath uttering “knock knock” motif to the title page in “Immortal Hulk” #22. “Who’s There.” This gag kind of speaks to the whole issue being much lighter in tone than the rest of the series.

“Immortal Hulk” #22 from a script perspective may be a lot lighter, the art team still knows what kind of comic it is at heart. Paul Mount’s colors have an incredibly consistent sense of unease to them that makes everything feel organic and lends the book well into the body horror it does so well. Ruy José and Belardino Brabo do an excellent job with Joe Bennett’s pencils considering that their work blends together seamlessly.

“Immortal Hulk” as a series is great and the creative team has been having fun with these characters from the start but in “Immortal Hulk” #22 the characters themselves get to have just a little bit of fun themselves in the margins from one horrific event to the other. If you have been reading this series from the start, this issue will not hurt your stride in any way, and if you are just picking up this issue fresh…where have you been? Hop on the Hulk train, friend. We’re goin’ smashin’ !