The war for utopia will cost much. Now that the players have been introduced, Harada and his cohorts engage in its first battle as a group. But it’s not just Project Rising Spirit awaiting them at the bottom of the sea. 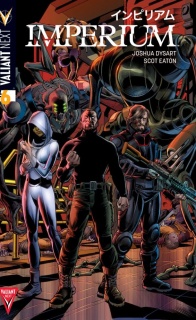 “BROKEN ANGELS”- PART 2! Whatever other-dimensional horrors have besieged Angela Peace Baingana to transform her into the humanoid monster called Broken Angel… Toyo Harada needs her!
Possessed of the most brilliant scientific mind on this planet- even if it’s not her own- the woman called Peace is poised to single-handedly secure Harada’s vision of global salvation… he just has to destroy everything in his way to get her. The underwater smash-and-grab heist of BROKEN ANGELS crashes into an unbelievable battle!

Whenever I describe “Imperium”, and subsequently its predecessor series, “Harbinger”, I tend to describe it as “imagine if the X-Men were allowed to change and evolve.” I still feel that. Elitist? Probably, but kind of makes it no less valid. There is no such thing as “character regression” or “putting the toys back in the toybox” in the Valiant Universe, and it is in the psiot corner of that universe that it is the most true.
Up until this point, “Imperium” has been a slow burn. It was more focused on introducing the players in Toyo Harada’s cabal of the morally questionable and really digging into what makes them tick. This issue, we rev the engine and see all these inhuman and allegedly human characters go to work against Rising Spirits soldiers.

Something that very much interests me in this battle is the end goal. Harada’s objective is to acquire not only the scientist Baingana, but the world’s first functioning cold fusion reactor. Now, this may seem mundane to some, but I can’t help but compare it to the “wars” fought in bigger superhero universes. The desire for, and the power potential in, a clean energy source is an incredibly topical subject matter, but

Dysart never beats us over the head with how important it is. Compare this to say… “Civil War”… which was doing everything in its power to shout “THIS IS IMPORTANT” and “AREN’T WE TOPICAL” in our faces and it made it all feel hollow. I get that the superbeing genre has a tendency to go over the top, but I feel like a true show of skill can still communicate such important aspects in smoother ways.
Moving from the macro, let’s move to some of the micro. Although the majority of the issue is action, Dysart does pepper in a good deal of character moments. The logical and more pacifistic Mech Major having to team up with the brutish Lord Vine-99 allows us to see the value Mech Major puts in life, even when he does have to snuff it out.

Another moment in this issue raises a question that I am hoping continues to be a theme within this book: What is Toyo Harada without his powers? It’s true that he was a corporate Machiavelli that created one of the most powerful and influential financial empires in the world, but not only is Harada Conglomerate gone but he no longer has the precognizant Bleeding Monk whispering in his ear. This issue takes away Harada’s Bomb-Given powers for a moment to show a decrepit old man who can barely fire a gun. He does still display the will to not give up, but is that going to be enough or is it going to be the beginnings of his own undoing.

Harada’s temporary vulnerability also shows a power reversal between him and Gravedog, who is the closest thing to a “normal” person among this group, but shown to be the most skilled at combat.
Now, for all the nice character moments this issue gave, the one character that we’ll probably have to wait more for on is Lord Vine-99. While a great design and his core personality adds something to the mix, he is probably the least deep of the core cast. However, Dysart has earned my willingness to be patient with the character. Also, I’m pretty sure that LV-99 has the same verbal tic as the witches in Snyder/Jock’s Wytches. It’s either coincidence or these all these comics are starting to blur together.

But enough on that. Let’s talk artwork. Now, I’ve said before, I like Scot Eaton taking over from Braithwaite. Considering the location this arc takes place in, an underwater mobile fortress, his heavier pencils and Wayne Faucher’s inks plus the more subtle color palate from Brian Reber do create a more claustrophobic atmosphere as opposed to the more open first arc with Braithwaite.

The thing about a book that involves characters with mental powers is that the artist can get to play some tricks with the artwork. Eaton, Facuher and Reber do get to have a bit of fun depicting Harada’s abilities to stop bullets, redirect them, floating, e.t.c. But it is with the aforementioned depowering of Harada that allows us to see and feel the hidden weaknesses in the wrinkled old man. And when the artists sneak in the appearance of a certain character (if you’ve read the upcoming solicits, you know who I’m talking about), they manage to put what I believe looks like fear in the almighty Harada’s expression. It does a real good job to sell the theme of Harada’s usefulness.

Having said that, the art does have some faults for me. There is one scene where someone’s head is blown up (No one important. Stop worrying), however, because of the panel layout, something that should be kind of weighty looked cramped into the side of the page. It’s explained what happened on the next page, but again, it could have had a bit more weight to it. Also, now this can be my own admitted color blindness, but I could have sworn that Gravedog had much darker hair than the auburn he has in this issue. One final -and I’m not sure whether or not I should call it a “flaw’- I found with the artwork, every time Harada uses his powers to disintegrate someone or something, it looks like confetti. Not sure if that’s the intention or not.

However, the team does rise to the occasion when they’re depicting Harada’s mind scan/mind meld thingy. Reber’s use of golds and reds to depict the poor Center Point’s current mental state is heartbreaking and cringing.

Final Verdict: 7.3 – For me, this is the weakest issue “Imperium” has had. But, “Weak For ‘Imperium’” is still better than a lot of other books.