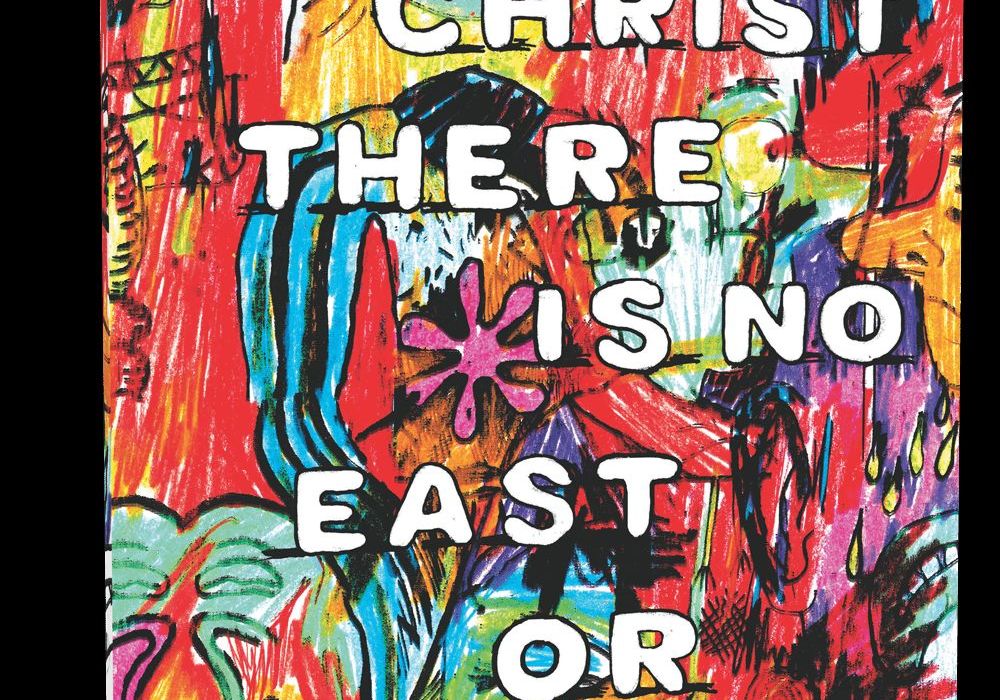 Is this book a trip through a panic attack? Is it a journey through the fearscape that is 2019 America? Is it both? Is it neither? 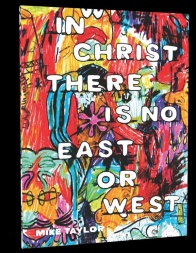 “Ok, here I go. Remember to steer into it — Don’t take your mind off it, get comfortable in your discomfort — Your body isn’t trying to kill you — Panic attacks aren’t actually dangerous — your heart will beat totally normally soon…”

Thus begins Mike Taylor’s raw and beautiful soul cry for America, as a modern-day Virgil in a hoody traverses the gasping and confusing psychological landscape of right now. In this inclusive and experiential journey, Taylor’s ecstatic mark making comes together to form a transcendental bridge that guides the reader to a more elemental place — not unlike paradise.

As a neat bonus, the dust jacket unfolds into a oversized psychedelic poster!

“In Christ, There Is No East or West” is a fascinating, borderline inscrutable work that feels both incredibly personal and universally relatable. That said, trying to describe what it is takes quite a few words, and likely won’t get a reader any closer to picking up the book or not. It is an idiosyncratic journey through anxiety, self-doubt, and hope (or is it the abandonment of hope?) that is as moving as it is difficult to parse.

The book begins with the main character – we later learn his name is Adam (or is he the Adam, the first man, of this new creation?) – having a panic attack of some sort. He’s trying to ease his way through it, talk himself out of what his body is putting him through. This is a relatively universal experience, even if you don’t suffer from panic attacks, we’ve all had those moments of trying to reason with our brains or hearts or lungs to behave themselves. But for those of us who have had panic attacks, Taylor’s pages hit like a ton of bricks. No place to look, no escape hatch found, all you can do is try to steer through it and try to minimize the collateral damage.

For all the relatability in those first few pages, Taylor then takes the book in place that feels incredibly personal. His narrator walks through some sort of reality that resembles any number of classic stories – The Divine Comedy is referenced in the solicitation, and that’s as good a starting point as any – on his journey through whatever this is. But there are also homages to things like The Seventh Seal, Blue Velvet, and Step Brothers, but it never feels like Taylor is leaning too hard on those ideas. This journey functions often times like a dream, where color pops up out of the blue or a reference to something sticks itself into an unrelated thought, or a sexual thought invades an otherwise chaste scene.

The artwork shifts and morphs along with the journey, with psychedelic imagery and abstract elements sometimes being on the periphery of the story, and other times at the forefront. The book is mainly in black and white, and Taylor’s linework is fluid and expressive. Characters grow eyes, have their faces rearranged, walk past unidentifiable objects, and generally zag whenever expected to zig. Every page offers some sort of visual surprise, but never at the expense of being able to follow the story, as abnormal as it may appear at any time.

There is also a lot of interesting geometric imagery throughout, whether they are the pieces of the old man’s game, or random objects that pop up throughout Adam’s journey. Math, in general, rarely is evoked when discussing things that are either abstract or spiritual, but here, geometric shapes and patterns are a very real part of this world. The idea of order and chaos being in dispute is made very clear when such finely designed pieces rub up against the manic world presented here.

Taylor peppers the book with references to modern American life, whether it is a madman wanting to build a wall or the grip that our possessions – and, specifically, our phones – have on us. But even those observations feel personalized. It’s a neat trick that Taylor pulls off, which is to allow the reader to both feel totally outside of the narrative and smack in the middle of it.

The title is a reference to an English hymn from the early 20th century, which references Psalm 103, and there is, indeed, a spirituality present in this book, though it isn’t exactly a conventional one. Throughout Adam’s journey, he encounters God a few times, even calling him by name, but there isn’t much traditional spirituality present. There are allusions the Garden of Eden, to resurrection, to asceticism, basically a cornucopia of Christian theology, but nothing so overt or in-depth that it is off-putting to those without the tools to decipher them.

Taylor’s ink line fluctuates between standard and very heavy throughout, and much of his shading still has very visible brushstrokes. Those moments offer another interesting glimpse into the world, where something from a distance can look ordered, but upon closer inspection is chaotic. That’s a really useful way to frame the entire book, actually.

There are no real answers presented here, and the book is better for it. Taylor delivers an emotional journey through the unknown, with nothing other than the contrasting beauty and ugliness of Adam’s interior life to guide us. It isn’t a difficult read by any stretch, but it isn’t an easy one either. It is a book that can be read in 10 minutes or in over an hour, depending on how slowly you sit with each image. Much like its opening salvo states, we are best to just steer into “In Christ There Is No East or West,” and try our best to weather the experience.