No matter how cleanly psychologists delineate stages of grief or map the terrain of loss, the actual experience of losing a loved one feels more like the unpredictable and uncontrollable swells of ocean waves than hills and valleys of a hiking trail. 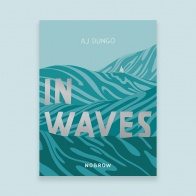 In this visually arresting graphic novel, surfer and illustrator AJ Dungo remembers his late partner, her battle with cancer, and their shared love of surfing that brought them strength throughout their time together. With his passion for surfing uniting many narratives, he intertwines his own story with those of some of the great heroes of surf in a rare work of nonfiction that is as moving as it is fascinating.

Before reading “In Waves,” be forewarned of its devastating emotional impact. One can be fooled by its appearance of simplicity, even sleekness, as a chronicle of surfing through comics, drawn with an illustration and design sensibility that is integral to its beauty but belies a coolness and detached splendor. Dungo is artful, restrained, even pacific at points, but knows when to let rip a crest of sentiment that will leave you crushed. At least it did so to me, and leaves me there still. Gratefully there.

The book intertwines two narratives, easily distinguishable by the contrasting monochromatic color schemes each uses. In the faded orangey-brown hues of redsand, Dungo tells a history of seminal figures in the advancement of surfing as a sport, as a cultural form, as an exercise of freedom. This he traces from the early 19th century history of Hawaii, where “surfing became a way to escape their troubles,/ to protest their colonization,/ to hold onto their disappearing culture.” He follows this history through two of surfing history’s trailblazers, Duke Kahanamoku and Tom Blake. who found prominence and sometimes isolation in their pioneering development of surfing.

The other story, in the stark green-blue hues of deep waters, is the story of Dungo’s relationship with Kristen, his girlfriend quite recently lost to cancer. Jumping through the roughly ten years of their relationship, from meeting as teenagers to his presence by her bedside as the cancer takes her life, Dungo discloses intimate and powerful scenes of their shared passion for surfing, their enduring treatments and amputations, their shy and sweet beginnings and their crushing last moments together. The two stories don’t fight each other for the foreground. Instead, like waves landing and receding on a beach, they make way for each other in a give-and-take that can only come from an organic and lived connection between them, between the fractal connection between a vast cultural phenomenon and a single, powerful bond between two humans in love.

What’s the connection? It feels like an injustice to sully with words what Dungo communicates so elegantly with his art. Like words trivialize what “In Waves” joins in rich juxtaposition of history and memoir, said in ways that it feels like only comics can do. At the risk of such trivialization, “In Waves” feels to me like it compares a generation- and cultures-crossing practice of the development of surfing, which operates in a strange compression and expansion that sometimes we ride and other times rides us, to the impossible-to-master and yet imperative-to-navigate risks of loving someone through life’s unspeakable travails. There’s a way all of us who’ve experienced grief (which, in due time, let’s face it, is all of us) can all identify with the strange compression and expansion of time, of the enormity of moments, of months that disappear like sand, when we realize how precious another human being is to us, and we are overcome by the inevitability of our impermanence. 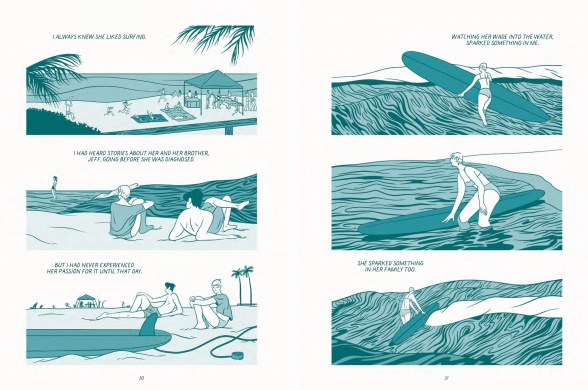 from In Waves by AJ Dungo (NoBrow)

Dungo is a revelation of a comics artist. His storytelling owes as much to illustration and design as traditional comic arts. And it’s a cleanness cognizant of open spaces I can’t think of a comparison for in American comics, perhaps save for latter day David Mazzucchelli, maybe Chris Ware, Adrian Tomine, and Jillian Tamaki at their most unhurried moods. But it seems like a style all its own, a splash of the bold lines of Polynesian woodblock art, a swell of Los Angeles Frank Gehry-like modernism, a narrative rhythm one might find in those aforementioned cartoonists but with much less angst and much more aching, less sad smirk and more sorrowful smile. I finished the book’s 400-or-so pages in a single sitting, and finished it again twice with no impediments except the lump that grew in my throat each time. As if carried by waves.

The book is startlingly personal, but whether intended or not, really flows into different vectors of critical appreciation. It’s intriguing to me as a work of graphic medicine. Having lost close relatives, as close as my own mother, to cancer, I found fascinating the distinct ways that “In Waves” shows how comics and graphic novels open emotional spaces in processing the shock, survival, trials, human will, devastating force, slow dread, sometimes dark humor, and ultimate heartbreak of cancer. I’ve thought about these different ways comic arts speak to experience with cancer, from Brian Fies in “Mom’s Cancer” to Teva Harrison’s “In Between Days,” from Pekar’s “Our Cancer Year” to Jane Foster Thor in the recent Jason Aaron-scribed run. Not to mention the Elizabeth Kubler-Ross and Paul Kalanithi type books, the Fault in Our Stars and Emperor of All Maladies type movie material. What feels singular about “In Waves” as a memoir of cancer is its coupling with an unforgettable extended metaphor that somehow perfectly captures the vastness and the tiny-ness of the entire experience at once. I’m still grieving cancer’s cost, and reading “In Waves” is one of the most spiritually resonant pieces of reflection on cancer I’ve read.

Another way to read “In Waves” is as a work of spiritual contemplation of transcendence, of the possibility of moving between cultures, the possibility of intersubjectivity in love. Dungo doesn’t seem ardently revivalistic about surfing’s Hawaiian roots, just factual in his recognition and reconstruction of surfing as an indigenous Polynesian practice that someone like Duke Kahanamoku could ride to prominence, as an Olympic hero, as a popular trendsetting Adonis for an appropriated culture, as a creative paradigmatic boundary-breaker of cool. Dungo doesn’t seem overt about his and Kristen’s own ethnic identifications, but fitting into a neat box seems like it would contradict the point, as well as the spirit of surfing itself. That spirit feels more like the subtle relationship between Kahanamoku and Tom Blake, who was less of an ambassador of surf like Duke and more of an awkward genius, innovative before his time. The suggestion seems to be that surfing– the ocean itself– is bigger than a single hero or rider, that it’s exactly its transcendence than makes it so amazing for everyday people to “conquer,” if for a fleeting second at the crest of a wave.

Similarly, love feels transcendent, fleeting yet awesome, incomprehensible and yet maybe the simplest and the only thing we know, in Dungo’s moving evocation. Something you can’t grasp but you might have the honor to ride, granted the patience and the pure gift of the right winds. Dungo dips into the perfect measure of moments with Kristen. Ones tinged with regret, leaving her behind to watch as they pursued the surf. Ones rippling with a feeling of stolen eternity.

It’s a memoir of unbridled beauty, of vast unknowns, of what can last among the waves.