The biggest Valiant events have always been centered around The Eternal Warrior protecting The Geomancer and the publisher’s newest storyline, “Incursion” is no exception to the rule. The issue features a fantasy-based narrative centered around The Geomancer and her struggle to protect the Earth. The story features a script from comics veteran Andy Diggle and new writer Alex Paknadel with art from Valiant veteran Doug Braithwaite. “Incursion” features the classic Valiant heroes venturing into The Deadside. With a similar subject matter and creative team to events like “The Valiant” and “Book of Death,” will “Incursion” be able to stand out from the pack? 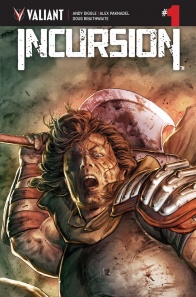 Beyond the margins of human reason lies a realm known as the Deadside, where the souls of the dearly departed linger – and where demons wait for us in the dark. For countless ages, Earth’s chosen protectors have guarded the veil between both worlds – but there are other doors to the Deadside, through which gruesome terrors from galaxies untold can trespass… With the planet’s freedom at stake, can the reigning Geomancer and her steadfast Eternal Warrior stand together against an invasion unlike any they’ve ever witnessed?

The Valiant Universe is expanding, and “Incursion” is a great example of how different the world has become over the past few years. Imperatrix Virago is an incredibly compelling villain for the publisher and a great way to focus the Valiant Universe on a daunting antagonist. Authors Andy Diggle and Alex Paknadel craft compelling characters with both Virago and Syntilla. The duo also does an excellent job further reestablishing the relationship between The Geomancer and The Eternal Warrior.

Artist Doug Braithwaite conveys the grandiose nature of the event with a large scale. Readers get to know characters like The Eternal Warrior in a truly visceral manner with some of the kinetic action sequences throughout the issue. Braithwaite lends a huge sense of scale to the villains of the piece by fleshing out their homeworld and large fleet. Braithwaite does an excellent job establishing a sense of tragedy readers get when the relationship between Tama and Gilad takes a dark turn later on in the narrative.

The first few pages where Braithwaite draws Cygnus Galaxy are among the strongest of the issue. The imaginative prose and takes on the overall nature of the intergalactic world are a marvel to look at. Braithwaite adds an insane amount of detail to some of the pages which pack an excellent level of page composition, adding to the overall nature of the story. Braithwaite’s pencils can seem stiff in some moments due to the more static presentation if his pencils.

Diggle and Paknadel portray the complex nature of The Geomancer and The Eternal Warrior without making the book feel derivative or silly. The moments featuring the Book of the Geomancer add to the narrative and do an excellent job foreshadowing some of the moments still to come in the mini-series. With such a complex narrative and so many conflicts and ideas introduced in the issue, it will be interesting to see if the publisher can manage to tell such a complex story in only four issues of material while still crafting a satisfying narrative.

For readers looking for something to stand out from past events like “Book of Death” and “The Valiant,” “Incursion” sets itself apart with a strong intergalactic focus. Plus, readers get a tease at what could be coming up in the next couple issues thanks to the final sequence, bringing out a new aspect of the story. With the wild amount of plot already established in the debut for the series, readers get a great frame of reference for the relationship between Tama and Gilad that is essential to the Valiant Universe as a whole.

“Incursion” #1 is a strong debut with some clever ideas and ways to distort the classic Tama and Gilad events that readers have seen previously. These characters are infinitely compelling and work in the context of their own series outside of the influence of the core titles. Braithwaite’s art in the issue is absolutely breathtaking. Braithwaite does a great job widening the scope of the overall narrative while keeping the focus on the core cast members. Sometimes, Braithwaite’s art can still be too static, detracting on his work from the overall issue. Diggle and Paknadel fleshing out the series and giving readers the important information about the Valiant Universe in small bursts. Diggle, Paknadel, and Braithwaite all work seamlessly through the debut to create a solid comic.

Final Verdict: 7.9 – “Incursion” #1 is a strong shake-up to the traditional Tama and Gilad story thanks to an intergalactic twist.