The first of Tony Stark’s current replacements, this new book sees the recently healed Doctor Doom take on the mantle of Iron Man. Written by Brian Michale Bendis and his frequent collaborator Alex Maleev on art, everything about this book promises to be a showstopper. I mean who doesn’t want to see Marvel’s premier bad guy rock a power suit and deal with other bad guys while tackling personal demons? Oh, you’re an alcoholic? How’s destroying the multiverse and rebuilding it in your image stack up huh? 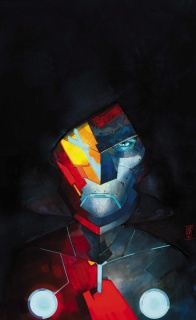 Written by Brain Michael Bendis
Illustrated by Alex Maleev
There is a new Iron Man in town and his name is VICTOR VON DOOM. The greatest villain of the Marvel Universe will try something new. Where Tony Stark failed, Doom will succeed. What is Doom’s Master Plan?

If you’ve not been reading Brain Michael Bendis’ run on “Iron Man,” you may be unaware, but Victor Von Doom has been popping up every now and again to help out Tony Stark and it has left just about everybody confused as to why. Not to mention his brand new, scarless face and uncharacteristically positive attitude. No doubt Bendis will aim to reveal all as he sets off on the start of this latest chapter in the Iron Man mythos, which sees Von Doom take up the shell-head mantle. If that wasn’t a big enough shock on it’s own, there are even bigger revelations within the book itself, specifically regarding Stark’s post-Civil War fate. Civil War II, also written by Bendis, has faced delay upon delays, all of which have finally caught up with the rest of Marvel’s scheduling as it appears “Infamous Iron Man” #1 should have released after the crossover’s finale. If you are reading Civil War II and want to avoid spoilers, now would be the time to stop reading.

At one point in this issue Doom interacts with Stark’s ally Doctor Amara Perera, through this they confirm to us that not only has stark lost the Civil War, but in fact died. I’m sure there will be plenty said about this as that time comes, but for now we’ll stick to this issue in particular. These revelations don’t deliver the impact you would expect them to on a title tied so closely to Tony Stark. There is a distinct lack of motivation or exciting moments within the book; sure we have action and Bendis plants many seeds that we’ll see as we go forward, but for the first twenty pages of its opening arc, “Infamous Iron Man” doesn’t give me any reason to why it should exist. Especially with a second Iron Man title on the horizon, one which see a young, African American woman in the suit. Having said that, I still have some faith in the title, Doom is a fascinating character filled with complexities; on the surface he is an overly dramatic megalomaniac, but under that there is an oddly charismatic skilled scientist/sorcerer. However, Bendis does not deliver on this premise as his version of Doom feels neutered, even during the action scenes he feels far too restrained and even dull. It is only across the first four pages we get given the Doom we all love to hate, it is just unfortunate that this is just a flashback to Doom circa “Dark Reign”.

An area I think Bendis has done better in is just how well he has established the tone and the themes of the book. Less experienced writers struggle in establishing what their book is about from the get go; sometimes this works for them, but a lot of the time a weak start usually ends badly. I like how Bendis seems to be aiming to balance Doom’s scientific knowledge with his magical studies, in the book’s one action scene Doom effortlessly takes down a gaggle of goblins with a repulsor blast. Iron Man, as we know the character, has always faced traditionally sci-fi enemies with a technological slant. However, with the reappearance of Von Doom’s mother (stood entrancingly at a cauldron no less) the “Infamous Iron Man” looks to be using that technology to battle magic this time around. Its an intriguing concept, thrown in with an espionage twist in the form of S.H.I.E.L.D Agent Ben Grimm, aka The Thing, it makes for the first niche work to ever come from Bendis, who normally produces more broad, straight forward superhero fare.

A lot of the success in tone setting is actually thanks to artist Alex Maleev, who creates a dark and gritty environment for Doom to feature in. It is very reminiscent of the noirish work he did with Bendis on the original “Jessica Jones” book. I’m happy to see it at play here, but only when a scene calls for it; when Doctor Perera is being interrogated by Doom, and then The Thing, the panels are dramatic and filled with intrigue. Maleev employs lots of shadow and menacing expressions to pump up the tension. However, his work fails to impress in what should be the more spectacular sequences, I’m specifically referencing the scenes where Doom uses magic. The shadows really begin to interfere and any kind of dynamism or power feels washed out, even with Matt Hollingworth’s bright colours. Maleev’s style tends to support a realistic and unsentimental story and I wonder how well he’s going to work with an increasingly fantastical plot.

Final Verdict: 7.2 – The premise and tone of this book really intrigues, though we are seriously lacking any payoff.