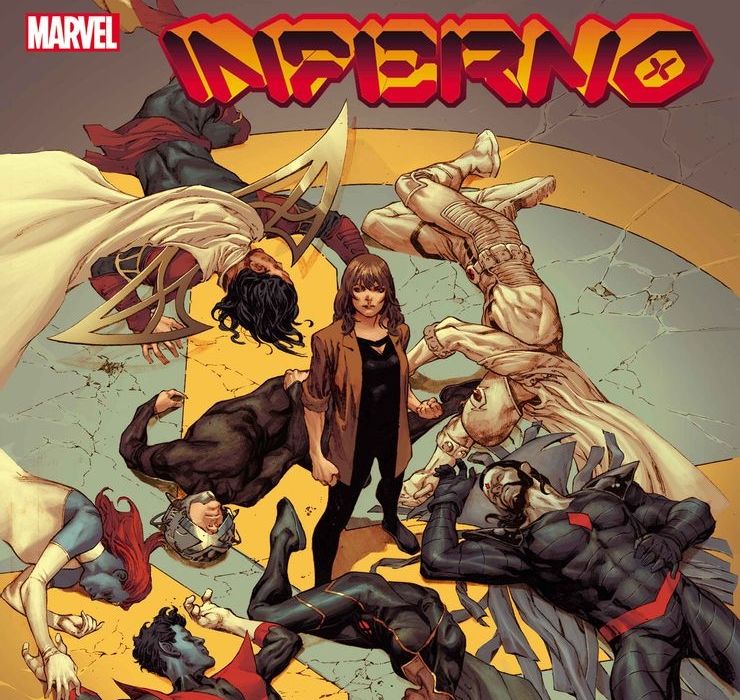 Jonathan Hickman’s X-Men promised readers big and bold ideas. Since the inception of the dual “House of X” and “Powers of X” mini-series, many have begun making the argument that the spin-off titles in the line are not capitalizing on the promise of Hickman, Larraz and Silva’s incredible sense of ambition. “Inferno” is directly promised as the culmination of all these recent X-Men stories. Will Hickman gain back control of this huge X-Men run to tell a story worthy of the massive amount of build-up from other titles? Will Hickman and Schiti be able to deliver the payoff needed to refocus the X-Men line? Without further ado let’s check in on one of the most anticipated comics of the year! 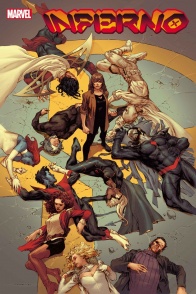 THE CULMINATION OF JONATHAN HICKMAN’S X-MEN BEGINS! “There will be an island—not the first, but the last…” Promises were made and broken. The rulers of Krakoa have been playing a dangerous game with a dangerous woman, and they are about to see how badly that can burn them. Mastermind powerhouse writer Jonathan Hickman (X-MEN) brings his plans to a head, joined by an incredible lineup of artists beginning with Valerio Schiti (S.W.O.R.D.)…as one woman follows through on her promise to burn the nation of Krakoa to the ground.

Hickman opens “Inferno” #1 with the resurrection protocol kicking off in a manner that echoes a seminal moment from “House of X.” As a reader, you can see from the opening pages that this issue is much more ambitious than the average X-Men comic book. “Inferno” #1 already has a wider scope thanks to the focus on the science behind Krakoa again. The issue reintroduces a key figure from the “House of X” mini-series who brought a ton of lore to the forefront. The threat of Nimrod still looms large over the franchise. That feeling of the X-Men always being behind Nimrod is evoked within the first couple pages of the issue. This issue will be jarring for readers who don’t expect a huge tonal shift in “Inferno” right from the opening page.

Hickman’s exchange between Destiny and Moira is another incredible sequence that really brings so many elements of the series to the forefront. Hickman reintroduces the science-based elements with the lives of Moira being explored in detail. Hickman is able to accomplish much-needed characterization with Moira and a character who has now become central to the plot. This heated exchange dictates the future of Krakoa and sets up the phenomenal ending. With these characters and plot threads being absent for so long, readers will get a huge sense of accomplishment from reading this issue. Of course, your enjoyment of “Inferno” #1 will hinge on the amount of time and issues of X-Men you have read leading up to the big event. Hickman is not telling a story for new readers through “Inferno,” he’s paying off the years of continuity that he established.

Hickman is primarily known as a plot-based writer but this issue proves that theory very, very wrong. “Inferno” #1 is all about the characterization of key players that we have been dying to read about for over a full year. “Inferno” #1 is focused on betrayals in relationships. Hickman’s voice for characters like Magneto and Xavier are shockingly honest. Xavier and Magneto have always stood just out of reach in this series from a characterization standpoint. The mystery surrounding Xavier and Magneto’s true intentions is enthralling. When Hickman uses their voices to interact with a wild card like Moira this issue evokes huge emotion.

“Inferno” #1 spends a lot of time leading up to some very important developments to come. However, readers are so emotionally invested in the current relationships and state of Krakoa that this issue will not bore anyone who is invested in the franchise so far. The final pages of the issue are built up really well and offer a harrowing emotional climax to the talking head moments which came before. Hickman is able to establish such a great sense of conflict in this issue that will inspire readers to dig deeper into Krakoa and try and figure out what is going to happen next.

Valerio Schiti fills the shoes of Pepe Larraz or R.B. Silva really well without feeling redundant. The seminal opening scene even finds new visual ideas on a moment that is visually recapped in excess: The Resurrection Protocol. Schiti’s page layouts look great. The page with Wolverine, Domino, and Kid Omega from the preview is one of the most polished panels I have seen from Schiti. The design of the page also features intricate panel techniques like panel bleeds. Schiti is responsible for a lot of talking heads in the issue. Thankfully, Schiti carefully lends interesting body language to a scene. The last moment where Mystique has her hands thrown down on a table really serves to capture her anger in a profound way. Schiti lends tension to moments that would be phoned in by other artists.

When Moira is discussing a topic she portrays a sense of dread in the position of her eyes and stern facial expressions. Schiti renders great science fiction moments that are full of tension as well. The Orchis station features inspired technology and character designs that are a nice break from the talking heads of Krakoa. Schiti isn’t given the most interesting script from Hickman strictly from a visual standpoint but it still doesn’t hold back from letting the quality flow through the script and art.

When readers reflect back on this issue and compare it to other stories “Inferno” #1 will stand out thanks to the characterization. Hickman’s script is honest and Schiti’s art is breathtaking. So many events feel rushed but “Inferno” is the payoff from years of storytelling perfectly captured for a grand comic book event. There’s so much foreboding subtext in “Inferno” #1 that is oozing between the panels.

Hickman’s characterization and dialogue are haunting. Even though “Inferno” #1 doesn’t bring in the action, it brings some of the finest writing in this franchise since “House of X” and “Powers of X.” Schiti’s art lines up in quality with the majesty of Larraz and Silva. Schiti draws beautiful X-Men characters who emote through their body language. Thanks to the art and writing of “Inferno” #1 Readers are intimidated by the presence of a mutant before they even start talking. “Inferno” #1 is a triumph for Marvel and shows that long-form storytelling can mesh really well with the climax of an event storyline.

Final Verdict: 9.0 – “Inferno” #1 is the most foreboding comic book event debut issue you will read all year.