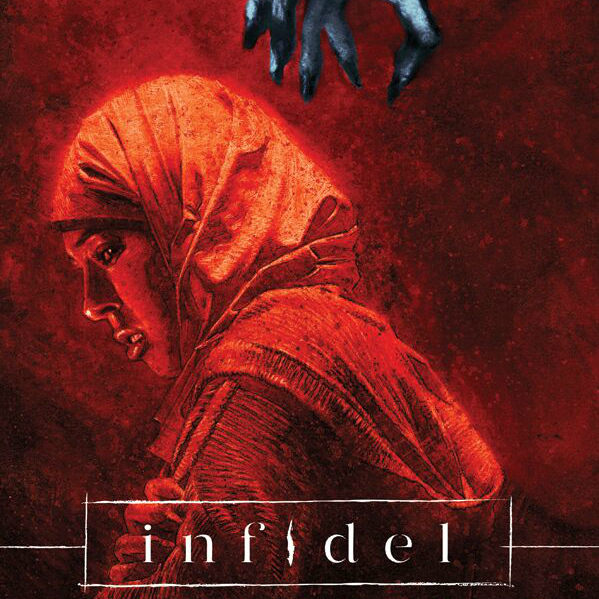 “Infidel” #1 was a title I went in blind on. Having a solid creative team, and interesting premise while looking different enough from most other books on the stand, I was intrigued enough to check it out. What I know now is that “Infidel” #1 is gripping and extremely relevant to the world we live in. Read on, as I tell you more about what makes this book tick. 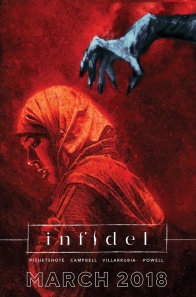 A haunted house story for the 21st century, INFIDEL follows an American Muslim woman and her multiracial neighbors who move into a building haunted by entities that feed off xenophobia.

“Infidel” #1 initially left me an emotional wreck. This book, not for the faint of heart, has a very immediate and uncompromising method storytelling, had me thinking about myself as a person and my own morals after the first read. “Infidel” tells the story of Aisha, a Muslim-American woman struggling to manage living in a beat-up, possibly haunted apartment, subtle racism from her mother-in-law, and a hot-headed husband. And what makes it work immediately is Pichetshote’s characters. Aisha is defiant of the stereotypes that degrade her, showing her nerd culture knowledge in the Sarlacc Pit cake at the start of the book, and showing her every-person nature as she’s just another person living in a low rent situation in America trying to get by. Her husband is a bit of an asshole, but not completely dislikeable as he supports Aisha, defending her culture choices when the going gets tough. Everyone is a sliver of a stereotype but also represent drastically different personalities, making them compelling and the story even more interesting.

Dig deeper, and you’ll also find an equally interesting and well-paced horror tale underneath these characters. In its purest form, “Infidel” #1 is a haunted house tale. Aisha lives in a house haunted by… racist, sexist ghosts. It sounds pretty on the nose, but it’s well-executed and timely storytelling in an era of upheaval such as ours. The ghosts cause discomfort and erratic sleep patterns in Aisha’s life, not unlike how a looming spectre of hate and bigotry hangs over our own world. What’s more, the main complication/hook at the end of the issue is when the ghost casts illusions that cause further tension and distrust between Aisha and her mother-in-law. It’s a great reflection of modern America, serving as a powerful metaphor without feeling overly political and preachy.

Looking at it structurally and regarding pacing is another reason why this comic succeeds. Even though this is the debut issue of a multi-issue tale, the tension is so well built up that this could still work as a powerful campfire story or cautionary tale. Throughout the issue, hints of a supernatural complication are dropped in the narrative, with the tone set immediately from the dream sequence at the start. We then start to get more suspicious, but nothing is blaring and obvious either: characters aren’t acting like they have an ulterior motive or acting with suspicion, they seem to be very contained within their own complex development. The most obvious hint is one that Aisha literally calls attention to, that the house is the site of a murder and most likely haunted. But because this is such a by-the-numbers plot device amidst a subtly woven tale about modern fears it doesn’t strike us as being overtly suspicious, which is the cleverness of the story. It’s not about hidden horrors and fears, “Infidel” is trying to highlight the terrors that exist freely and prevalently on the street and public. And then the climax hits, leaving us readers emotionally wrecked, thinking more about the world around us, which is exactly what a good cautionary tale hopes to achieve. It may be a debut issue, but Pichetshote structures this like a standalone tale, increasing effectiveness in telling a great story.

Tonally, Aaron Campbell has this book nailed down. His work is reminiscent of artists like Mitch Gerards and Alex Maleev, having that sketchy, pastel realism about it, which feels expressive in emotional storytelling but draws the line just before ugly over-realism, a thin line that keeps it firmly stunning. We see this style flourish when rendering the environments of the city around Aisha. When Aisha and her friend meet outside the city’s mosque, it’s frontal image is one cast in light, cementing it as a place symbolically of goodness, but shadows lurk at the ceiling, a metaphor for any good religion. However, contrasting that to the rest of the story is like comparing night and day. The apartment Aisha lives in is broken down, barred off, grimy and literally haunted by racist ghosts. The neighbourhood is hatched with this musky crayon like shadowing too, with doors covered with “FOR SALE” flyers and the pavement grimy and oily. It’s a reminder that environment is very key to setting up a story tonally, and Campbell gets this more than most.

I would be remiss if I didn’t mention Campbell’s powerful facial work. As I said, his artwork draws the line between cartoon simplicity and gritty realism, and this works best when conveying real, deep emotions. One of the most varied and diverse examples of Campbell’s work is Aisha’s mother-in-law, Leslie. Through Tom’s voice, we understand that surely Leslie is a typical woman of her generation with unfortunate racism ingrained into her subconscious. However, from her actions and expressions, we can see that she’s genuinely trying to approach Aisha and her relationship with her with good intentions. When Leslie talks about how her granddaughter hugged her without prompting, her face is one of warmth but also subtle surprise that her Muslim daughter-in-law managed to evoke this feeling. Then there’s the subway scene in which Leslie clutches her purse more tightly as a respectable person of color walks past her. It’s told with other dialogue over the top, essentially with only visual telling, but Campbell conveys the transition of Leslie’s general contentment to cautious fear and self-disappointment as the panels in between show her frail grip grasping at her bag-handle. It’s powerful visual storytelling that feels scarily relevant and moving.

José Villarrubia is something of an old hand in the coloring industry, but works great her at establishing a thoroughly modern yet equally haunting tone. What’s interesting is that most of the palette throughout the books is done in old school, pastel shades of color. Something that usually conveys nostalgia and warmth is just as effective in the hands of a master in a book like this. What makes it so powerful here is the use of it in excess. When Aisha argues with her husband Tom in the apartment hallway, the whole room (and Tom’s vest, might I add) is a strong theme of pale jade and blue pastels. Colors that usually evoke calmness are being mashed and blended here to convey unease and tension, working well in tandem with the script and art to achieve this. Similarly, when the ghost appears in the latter half, it’s quite a dull, pale red that’s used to render it, but it creates the sense that this is the ghost of someone from a bygone generation, which makes it play in well with the underlying generation racism theme.

“Infidel” #1 is stunning. It’s a thoroughly modern tale with wildly compelling characters, deceptively overt storytelling and excellent pacing. It’s a tale that’s conveyed with great sequential art that conveys sublime storytelling even in the absence of dialogue or narration. It’s a book that even has coloring that ties in with its racial undertones, but still manages to look eerily beautiful. This is an uncompromising, powerful book that demands your complete attention.

Final Score: 9.7 – “Infidel” #1 presents one of the most compelling and evocative tales with powerful social commentary, gripping tension, beautiful art and well-paced execution.