The haunting story of Aisha and her extended family continues with issue 2 of “Infidel,” as reality and the supernatural seemingly converge. Beyond the excellent script and art, what makes this sophomore issue (and series) so harrowing is how the real-world aspects of its horror are even stronger than any monster and ghoul that the imagination could concoct. 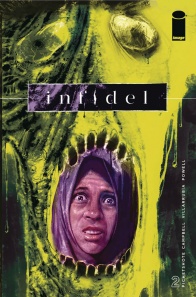 The haunted house story for the new millennium continues. What is the secret behind the terrifying entities haunting Aisha’s home? And as she discovers answers, will it be her family that pays the startling – and horrifying – price

The first issue of “Infidel” had already revealed that the horror story that Aisha, her husband Tom, and his daughter Kris find themselves in, amid an almost decrepit building, was actually the backdrop for a much deeper examination of prejudice and religious belief and the trauma that individuals can go through when abused and pushed to their limits. It was a powerful choice and one that translated efficiently unto the printed page, leveraging on comics’ visual narrative to surprise and terrify. This initial success is taken further with the series second offering, as nothing is made obvious and everything is made scarier. Readers should fear for Aisha’s mental health, for the well-being of those around her and for the inherent question this drama presents: is it safer to live in a world without supernatural monsters or would it be more reasonable to have them and, by doing so, discard that the realities of the world are so horrifying and traumatic that they lead disfranchised individuals to such dark paths?

Campbell is no stranger to thrillers and horror stories and his visual narrative style shows it. In a series like this one, the horror lies less on what is shown, but rather on what lies hidden just beyond perception and even on what is simply hinted at. Here, Campbell is at his best, with details making their entrance unannounced, from faces hidden in kitchen knife blades and small panels that almost slide off the page. Even beyond that, the manner that Campbell portrays facial expressions play right into the reader’s own pre-conceived notions of who or what are the heroes and villains of the story. Kindly faces are weird just enough to make one guess about their real intentions, terrified expressions may hide other meanings and friend supporting looks can hide negative judgement. It all comes together extremely well, building to the entire goal of the creative team that nothing is what it seems.

Colors by Villarrubia are a critical part of the issue as well, as the artist uses them to separate into layers what is clearly real and what is supernatural. The former use a traditional color pallete, focused on the mundane and the trivial day-to-day. The latter use strong reds and purples to maximize shock and distinction; and since Campbell used those small panels and details mashed on the page, those bursts of color reinforce the notion of elements out of place. When those worlds do converge, and the supernatural seemingly make its way to what is surely real, colors are mixed as well, as grays and light purples dominating the scene.

Finally, Pichetshote’s script and plot. It is easy to tell how important those themes are to the author and how well he manages them on this issue. Prejudice is like a virus, something that creeps in, far more effectively than any storybook monster ever could. It may be more harmful, perhaps, when delivered in small doses, on apparent harmless comments or quips, rather than on full-blow demonstrations of hatred. By choosing to portray this condition under the ambiguity of a potential supernatural invasion, Pichetshote is able to include the question of “is this really happening?” in more ways than one. “Is this really happening?” as in are the monsters and ghouls really causing all of this and “is this really happening” as in the current state of the world and rising tensions.

His characters are more than believable: they are well-rounded, complex and exist beyond the plot. More often than not, comic book characters exist to serve two purposes: to be the lead, heroic person readers are following or to be a supporting cast, used to achieve the first goal better. Not so here. These characters could easily continue to go on their daily routines away from the reader´s eyes. Not only Aisha and her family, but nearly all the ancillary characters, even if they appear for a page or less so. It seems that a backstory to all of them exist: the reader simply didn’t have access to them yet.

Final Verdict: 8.9 – Just as provocative and timely as its debut issue, “Infidel” #2 continues to present a terrifying scenario, where believable characters struggle to remain intact with their moral core. And that is even before any supernatural monster or creature can raise its ugly head.