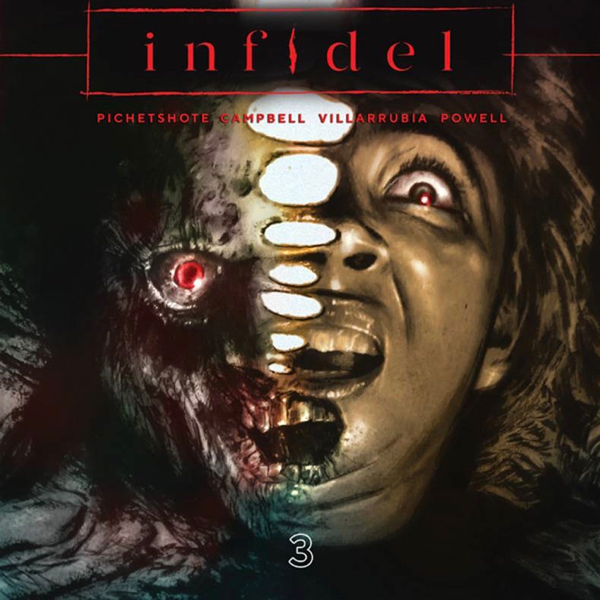 With captivating artwork that continues to be intensely attuned to the book’s storyline and themes “Infidel” #3 shifts its focus to those who surround its central protagonist. (Warning: minor spoilers ahead.) 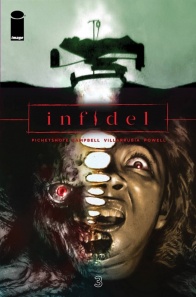 Following last issue’s devastating events, the mysterious entities haunting Aisha’s home escalate their attacks. As the nightmare spreads to her friends and neighbors, the creatures expose their true natures and long-buried hatreds.

“Infidel” #3 begins with a flashback, drawn in the blocky, 2D style of a child. Even so, the imagery is unsettling. A striped green snake with a forked pink tongue begins to coil itself around a girl, only to be distracted by a spider, which it quickly engulfs and kills. The snake slithers away and the girl breathes a sigh of relief.

Unfortunately for the girl, this moment is a mere blip. Suddenly, on the following page, she is overcome by spiders. They swarm her arms, legs and torso. She frantically brushes them off and staggers away. Then, in the following panel, the girl’s friend, Aisha, appears and we learn that this is Medina, not Aisha, as we may have assumed. As the scene winds down, the girls share a friendly embrace, comforting each other through alternating anger and tears as they discuss the unhappy circumstances in which they find themselves. It’s a very powerful and well constructed opening scene, but it’s also a little bit wonky and emblematic of the issue as a whole.

Through two harrowing introductory issues, Aisha has been the book’s protagonist and unambiguous center. The overt and less conspicuous forces of evil, both societal and supernatural, have swirled and revolved around her, relentlessly worming their way into every her waking moment and even her dreams. Now, suddenly, at the halfway point of this five-issue miniseries, the focus has seemingly shifted to Aisha’s friend Medina and the other secondary characters as they seek to understand what the hell is going on.

Granted, from the very start it’s been clear that the apartment building itself is a vortex of evil, but the book has never really functioned as a standard “haunted house” ensemble piece. To this point, in fact, one of the book’s great attractors is how much it’s made us care about its fully human, expertly rendered core characters, Aisha and her step daughter Kris. With the focus now diffused across a collection of characters, well constructed as they may be, the narrative stumbles.

Fortunately, though the story has shifted gears and turned its focus elsewhere, Aaron Campbell and José Villarubia’s artwork remains consistently captivating. Campbell’s thin, spontaneous lines and subtle shading are perfectly suited to Villarubia’s world-weary, often disconcerting, desaturated colors. There is a brooding undercurrent of disquiet and apprehension, that continually keeps you on edge. A stunning, blood-soaked two-page spread at the literal center of the book perfectly exemplifies this visual foreboding. The dialogue is fairly mundane as the characters discuss various details of the bombing that rocked the apartment building months ago. Smartly, Campbell keeps the focus on the characters’ faces and hands as they sip cups of coffee and try to sort things out.

Meanwhile, the panel borders consist of deeply unnerving, partially dried, serpentine trails of blood. At the same time, various red-black drops and spatters fleck the page, accenting the images. In the center of it all, a body lies face down, awash in nothing but red. The bombing is in the past, but the physical and emotional wounds are still fresh. There hasn’t been time to heal or even a willingness to do so. Evil forces lurk, ready to strike again.

Later, there’s another wonderful scene between Medina (a Muslim like Aisha) and their white, blonde haired neighbor Haley. After an initially friendly exchange, Medina pointedly confronts Haley and calls her out on her knee-jerk rush to judgment. There’s a definite feeling of vindication — we want and need Medina to do this — but there’s also a sinking sensation that such a confrontation will have ugly consequences. Some grotesque, reprehensible force continues to feed off these moments of conflict and disconnection, gaining strength and power off the anger the characters feel. In fact, on the book’s brilliant final pages, we see this very clearly.

Ultimately, as the third issue out of five, this installment functions as an interlude. Given the intensity and frenetic pace of the first two chapters, it’s not an unwelcome break. The focus is a bit diffuse, but readers needed a chance to collect themselves and prepare for what promises to be a powerful and cathartic finale in the book’s final two chapters. Hopefully that narrative will refocus and Aisha and her immediate family. Clearly, as one of Aisha’s dearest childhood friends, Medina has a strong role to play in the bigger story, but the power of this book is the deep connection we feel to the titular and singular infidel, not the ensemble cast.

Final Verdict: 7.9 – Narratively, “Infidel” #3 gives readers a chance to recollect themselves in preparation for the book’s final two chapters while artwork continues to excel.