Marvel’s ever enigmatic “Inhumans” franchise is hitting something of a stride lately. With “Royals” throwing them back into the cosmos, and a TV show on the horizon, the time is now to fill them out with spinoff books. And whoo boy, what better creative team to lead such a spinoff than recent “Deathstroke” scribe Christopher Priest and “Poe Dameron” illustrator Phil Noto? Let’s see what the guys have in store for us. 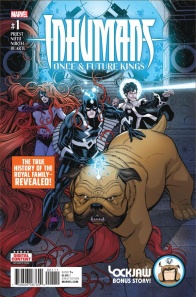 SOMEDAY, ALL OF THIS WILL BE YOURS!
A king in training. A brother destined for madness. These are the early days of the Boltagon legacy. When the king of the Inhumans is attacked, Black Bolt and Maximus spring into action to save their leader! But when Black Bolt loses control, what are the consequences for his future kingdom – or his own family? Plus: A two-page backup (in every issue!) starring Lockjaw, as told by UNBEATABLE SQUIRREL GIRL writer Ryan North and artist supreme Gustavo Duarte!

It’s clear from the start that this is a book crafted by veteran creators who still have the goods. Priest nails his intriguing characterisations here, having the usually-villainous Maximus play the role of an underdog hero next to his big brother, Black Bolt. It’s not only a refreshing take on the character that always seems to have an ulterior motive, but a great way to see his road to madness develop as he lives in his stoic brother’s shadow. However, this is ultimately a co-starring book, and we do see the burden of trying to do the right thing weigh upon Black Bolt’s shoulders too. As he questions the ethics for a race of slaves to work for the royal family, we see roots of the heroism he’s destined for in the future. Priest is pretty by-the-numbers in this regard, and overall Black Bolt is the least compelling character because of this.

The real shock here was that Priest introduces Medusa with equal gravitas and importance to the two brothers. Medusa has always been portrayed as a particularly self-reliant female lead over her history, and Priest makes sure this is immediately obvious here. Medusa makes herself known as a defiant, opinionated powerhouse right from her debut – she knocks away the guards asking to send her to the King, and poses her problems with the King’s rule. Even in a latter scene which could easily have fallen into damsel-in-distress territory, Medusa biffs and batters her way out of a situation that Black Bolt and Maximus tried to rescue her from. My only problem with this characterisation is that Medusa’s sister Crystal, who does make an appearance, is literally brushed aside, exists without dialogue and appears weak and timid. I can see the choice was made to focus on the three central characters, but I just feel it’s somewhat offensive to her well-developed history to shove her away like this.

What I love here is how Priest has set about worldbuilding an under visited section of Marvel’s history. This period of Inhuman Marvel comes off as a time of political unrest, where the civilization of Attilan is divided against the ruling power. The current King, known here only as the Living Terrigenesis, or ‘The Unspoken’, appears to be something of a usurper, and someone who was very involved in the building and expansion of Attilan – specifically building a monument to himself before it is torn down by the rebels. Priest makes him a fairly complex character – he doesn’t seem to be a tyrant, but doesn’t want Black Bolt to steal his limelight and/or eventually success him. What’s good and bad is that there’s an underlying narrative here that’s yet to be seen. It’s an exciting prospect, and is shown using such a diverse, opinionated cast. However, it’s never really inferred what ‘The Unspoken’ did other than come to power during a time when there was none. It’s vague and makes it hard to position him as a villain of this story.

Make no mistake – thanks to the hard work of Phil Noto, this book looks as if it was a renaissance painting of a real period in history. As soon as you dive past the cover, we’re greeted with a magnificent splash page of the King’s bust hewn into a rock formation, as well as the title of the storyline mixing with the environment in true Will Eisner fashion. You get a sense of the scale of the story from this one picture, and Noto doesn’t fail to make you draw breath. This continues through the story, with Noto bringing a strong sense of setting to the whole book. The opening scene, on the sandy coast near the rock formation, feels like a strong fantasy setting. The setting, in theory (a deserted beach by the ocean) shouldn’t be interesting. Yet Noto uses the empty, negative space of the land to convey a very isolated feeling – especially as the ocean separates Black Bolt and the ruling class from the slaves on the rock formation. It’s a great use of setting as storytelling, and Noto makes it immersive.

Coming off his work on “Poe Dameron”, which (disclaimer) I wasn’t a huge fan of, Noto’s character works feels a hundred times more full of life. Noto portrays these characters with familiarity and in ways we’ve never seen them before. Maximus, right from the start, looks like an inquisitive yet naïve and concerned teenager, and Black Bolt is a stoic, tough, and arguably arrogant number– fitting Priest’s voice for the characters to a T. What’s really important, however, is that this isn’t his static emotion throughout the whole book – Noto renders Maximus full of resentment as Black Bolt begrudgingly accepts recognition from the King that he won the battle for him. It’s great as it suggests character development without directly suggesting it in dialogue – something both Noto and Priest do well as a team here.

Noto handles the coloring here as well and to great effect. Having the artist handle all duties might be a slower process but makes for a much more singular and prominent vision for the art. Noto’s colour palette seems to represent the mood for the series – saturate color that’s full of life, but still muted and greyish implying a sinister undertone. I like that Noto changes predominant colors during a scene that reflects the mood of the protagonist featuring in it. When Black Bolt screams in a one page splash, the background is a heroic and triumphant blue. When Medusa struggles against the King’s guards in her debut, the atmosphere is painted an aggressive, resisting red. It’s subtle storytelling that works hard to completely immerse the reader physically and emotionally.

I have to say, I’m a little disappointed but not entirely surprised by the Ryan North and Gustavo Duarte backup story at the end. From the solicits, I was anticipating a soul searching Lockjaw tale that would span multiple issue endings and bring a light but deeper meaning to the brave Inhuman pup. What we’re given, however, is a fun little two-pager with the Thing essentially playing super powered fetch with Lockjaw. It’s certainly a nice story, and isn’t badly executed by any means, but when the afterword of the issue says it’s ‘breathing new and hilarious life into the ever-lovable Lockjaw’, you’re left feeling a bit short-changed.

Marvel have proved the obvious here – put a Rockstar creative team on a book together, and you’ll get a great, well-told story. Priest and Noto’s Inhuman prequel story proves that prequel stories can be compelling AND stylish – with original characterisation and a glossy finish that no one else but Noto can bring. This is undeniably a series to watch if you have any passing interest in the reinvigoration of the classic Jack Kirby franchise.

Final Verdict: 8.0 – “Inhumans: Once and Future King” is a beautiful start to what looks like an epic chapter in the Inhumans’ history. Priest brings his best on his return to Marvel, and Noto provides some sublime artwork.