Christopher Priest and Phil Noto are going back to the beginning of the Inhumans in “Inhumans: Once and Future Kings.” For most readers, this is going to be the first time exploring the origin of the characters and for others, this is going to be a more focused title than what you can see on the IMAX screen in a theater near you. Chances are even more astute Marvel fans don’t know the minutiae of the some of the biggest and most popular characters filling out the Inhumans roster.

Thankfully the creative of the title is going to fill in some of those gaps with the information in which you need to know. However, can Preist and Noto follow-up on all the threads cemented in the first installment and still bring a good story? 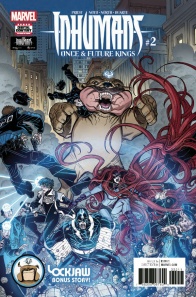 THE ROYALS TAKE NEW YORK! On the run from the king of Attilan, Black Bolt, Medusa and Maximus are transported to an alien world: New York City! But someone is pulling the Royals’ strings. Just what does the rebel Elisha want? If they’re gonna find out, they’ll first have to answer to – the Wizard! Plus: The continuing adventures of Lockjaw, as told by UNBEATABLE SQUIRREL GIRL writer Ryan North and artist Gustavo Duarte!

Sometimes a Christopher Priest comic book can feel a little difficult to comprehend. Wrapping the average consumer’s mind around the wild world of the Inhumans is something few writers have achieved and pairing the unique skillset of the Priest is an interesting combination. However, Priest introduced a new character which guided and grounded the young Attilan Royals into an interesting place in “Inhumans: Once and Future Kings” #1. Many seasoned comic book veterans aren’t quite aware of the origin of the characters that still might not the be the most exciting idea for fans of the property. Thankfully, Preist’s careful and subtle look into the dynamic origin contained a lot of energy and finesse which made the first installment stand out. While the follow-up issue to the book doesn’t quite capture the same enchanting vibe, there are still some incredibly well written moments in the comic allowing the tale to stand out against lots of the contemporary issues crowding store shelves.

For starters, Priest’s epic title cards are back. The cards are a great way for Priest to communicate themes and break up how the story is read. I can’t think of another modern comic book writer that has such a distinctive aspect to their titles. Aside from the cards, Phil Noto brings a casual vibe to the story Priest explores by placing the protagonists in a couple of different contexts. Seeing the younger Inhumans assembled on the streets of Manhattan adds something more unique to the story and watching how the characters interact in the setting where they are outside of their element gives Preist another way to ground the heroes to a more natural environment. Noto vibrantly draws the two distinctive worlds colliding as the sharply-dressed Karnak takes the subway and Black Bolt saves the average people at risk towards a construction site. The Inhumans feel so alien and otherworldly that placing them in New York City grounds the comic.

Aside from meshing elements that aren’t usually placed together, Noto’s art is a wonderful asset to the issue. The penciler’s art can be lighter on facial expressions and can seem too stiff at some points, but the settings combined here laid on the page by Priest seem tailor-made for Noto’s craft. The minimal backgrounds and vibrant, painterly colors give the title a sense of Royalty that the creative is trying to instill in the series. Because of the pretty and bright hues of the book, there’s a dark irony when aspects of the comic start really going wrong for the cast of the book. Characters die and certain others are betrayed, watching Noto draw in these more sinister panels adds a nice juxtaposition of subtext to the narrative.

Lots of the scenes in this comic swerve into some interesting directions but it’s hard to know exactly which direction Priest, Noto and co. are headed here. Getting a tiny moment of action where you wouldn’t have expected is a strong way to pay off the smaller scenes which might not amount to anything in lesser titles. Priest doesn’t take the narrative too far either in either direction as his restraint in other scenes is remarkable. The moment that might have underwhelmed me the most in this issue is the cliffhanger which introduces a nice element to the story, but this element is something that astute Attilan readers could have seen coming a couple of miles away. Lots of the material in this comic is strong but Marvel and the creative team should not be afraid to add some unexpected aspects of this story within future installments.

Final Verdict: 7.5 – While it may not reach the exciting heights of the debut issue, “Inhumans: Once and Future Kings” #2 is still so good the comic will make you care about the Inhumans.