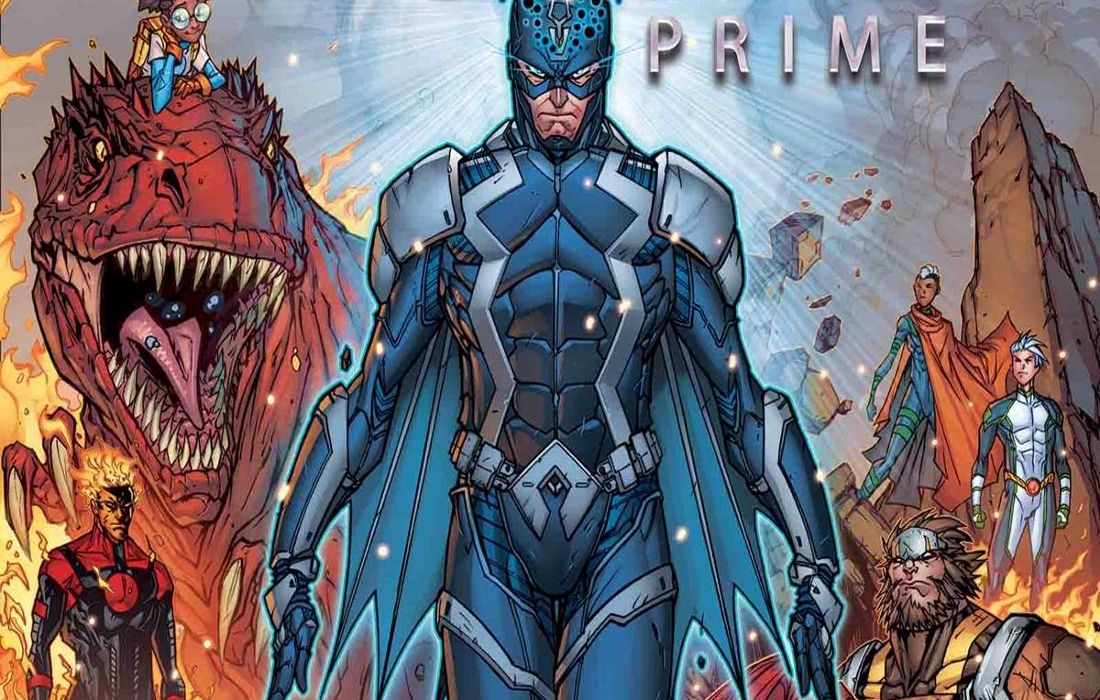 You can’t have any more Inhumans until you figure out what to do with the Inhumans you’re given. At least that seems to be the message being sent with “Inhumans Prime” #1, a sort of prologue/season premiere of the upcoming new Inhumans books, headlined by “Royals” #1. This issue does a pretty good job at introducing the conflict and the cast, while also being a fairly fun superhero comic in and of itself. 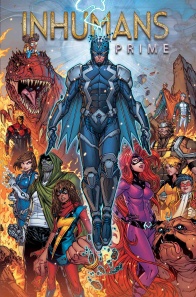 RESURRXION BEGINS HERE! In the wake of the awesome events of IVX – what will become of the Inhumans? In this oversized special issue – the trial of Maximus! The coming of Marvel Boy! And what is the dark secret of Black Bolt? A special bridging issue between the past of the Inhumans and their future – on Earth and in the stars! Rated T+

The issue opens with, of all characters, Noh-Varr, lately of the Young Avengers. He’s a Kree, the race that originally created the Inhumans, but he’s from a parallel universe, and he realizes that the Inhumans have no idea what Terrigen is. This was a great way to start the issue. It questioned something I didn’t even think to (the origin of the Inhumans powers) and establishes the stakes and the mystery. There can no longer be new Inhumans, but maybe if they can learn about the magic space crystals that give them powers, they can secure their future. Right on!

The issue jumps to Triton, Lineage, Maximus and the Unspoken, four Inhuman exiles marching through the desert. Maximus is typically the most interesting Inhuman character, a more obnoxious version of Loki who’s a mad scientist instead of a magician. Writing Maximus well is a lynchpin of being able to write the Inhumans, and Ewing does a fabulous job at making the motormouth super-obnoxious, but strangely compelling in his weird villainy. Maximus is like Loki, in that he’s an evil brother of a royal family, but he also has the trappings of the Joker, in that you can never tell if he’s just sewing chaos, or if he has a grand plan.

Karnak arrives, probably the most rehabilitated Inhumans character of late, thanks to a badass series by Warren Ellis, and Ewing continues to write him as Ellis established him- cool and understated yet so over the top when he opens his mouth. The issue unfolds very deliberately, at least so far. The interplay between Maximus, Lineage and the Unspoken is a reminder that in the last few years, the Inhumans have gotten a bunch of really cool villains developed in their rogues gallery. Seeing them fail to work together to bring down Karnak is as superhero as a book gets, but the characterization is so strong, it really works.

That’s when the rest of the Inhumans show up, in an enormous splash page. The art team, who’s work is a serviceable Marvel house style for most of the issue, really shines here. There are so many Inhumans characters, from a few different types of books, and seeing them together really captures their diversity. There’s the classic royal family, represented by Black Bolt, Medusa, Crystal, and Gorgon, looking as grave as ever. They’re surrounded by the so-called Nuhumans, a group that includes Inferno, Iso, Flint, Naja, Reader, and his seeing-eye dog Forrey. They look more traditionally superhero, like something you would see in X-Men a few decades ago. The crowd shot also includes superspy Quake, Moon Girl and Devil Dinosaur, Kamala Khan, and Mosaic.

The splash page really drives home the potential in this push to make the Inhumans the next big thing. The royal family has been around since Stan and Jack were doing the very first run on “Fantastic Four” and they haven’t changed much, but there are characters who would work in a team adventure book, characters that would work in an all-ages book, characters who could inspire discussions of race and identity in an explicit way and not just a metaphoric way. As irritating as the marketing push has been at times, there’s a lot of substance to the Inhumans now, and a lot of unrealized potential.

With the arrival of so many good guys, there’s a big fight scene, which adequately establishes a lot of the newly arrived characters in a panel or so, which is how I like my superhero fight scenes. The good guys win of course, and Medusa decrees a whole bunch of things, establishing a new status quo, and setting up the new books. It was here that the issue was sort of losing me; Crystal has a big speech that sounds like anything you would have heard a mutant saying after “House of M,” and I couldn’t fight off the feeling of been there, done that.

Until the last page. There’s a twist there that had me grinning ear to ear. It’s silly, and referential, but it showed what a master Ewing has over superhero comics writing. Just when the story was taking itself too seriously, it deflated itself with a silly one-liner and the promise of adventure.

“Inhumans Prime” makes a good case for the existence of “Inhumans” comic in the modern Marvel landscape. It reads nicely as an issue, but does the job of making me want to check out “Royals” and “Secret Warriors” and probably also Saladin Ahmed and Christian Ward’s upcoming “Black Bolt” series. After insisting for so long that the “Inhumans” are important and that we should care about them, this book finally gives a good reason to.

Final Verdict: 8.3 – A fun story in it’s own right, and one that makes a great case for following the adventures of the many different Inhumans.