Things get weirder and wilder as Ellis and Shalvey start to lay the foundations for a mysterious marathon of a story. 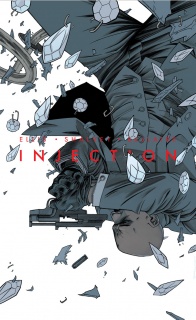 INJECTION is the new ongoing series created by the acclaimed creative team of MOON KNIGHT. In this issue: the five members of the Cross-Cultural Contamination Unit came from very different backgrounds. Simeon Winters, for instance, came from a department of the British Foreign Office. The one that kills foreign people. Also this issue: sandwiches.

As much as I’m sure they’re sick of hearing it by now, I (like everyone else within 100 miles of a comic book shop) devoured and adored Ellis, Shalvey, and Bellaire’s brief, bravura run on “Moon Knight”. In a world of constant continuity tweaks and overly confusing intertextual references it was so refreshing to read something that stood fully, completely alone. Each one of their six issues could be picked up at random with minimal knowledge of the character of Moon Knight or the world of Marvel at large and enjoyed for what it was: a simple, engaging twenty page story.

So, naturally, when they announced they were leaving the book to pursue the mysteriously titled “Injection” over at Image, I was intrigued. Would they be taking their newly found style with them? attempting to tell standalone stories on their own terms, issue by issue? Well, the short answer is, absolutely not.

The slightly longer answer is, however, a lot more interesting. From the opening pages of the first issue it’s clear that “Injection” is, conceptually, the polar opposite of “Moon Knight”. Eschewing the solo protagonist, Ellis has opted for a hugely disparate ensemble cast of misanthropic professionals who seem to be linked together through a previous project they worked on together with fallout so catastrophic that it sent them to the four winds. Now, with another, potentially worldbreaking, threat looming in the shadowy distance, the company they worked for is trying to pull them back together.

Put down like that it sounds like a story you might have read a hundred times before, and yet Ellis’ ability to kick off in media res with a group of characters and solidify relationships with little more than a couple of snarky comments means that his nebulous web of contacts feel intimately connected even though they’re operating from all over the world. Still, while I enjoyed the level of unknown in the first issue, I could see it feeling a little too disjointed for some readers as it really feels like there’s nothing but shadows tying most of the characters together. What’s more, issue two makes it clear that Ellis is perfectly happy for that to carry on for the near future.

Trying to codify issue two I can only really describe it as a ‘high-octane techno-heist’ comic. It brings Simeon and Vivek, two characters only touched upon in the first issue, to the forefront, showing off their particular skill-sets in Ellis’ new team. Vivek seems to have made it out of whatever tragedy tore the Cultural Cross-Contamination Unit apart better than most, living in a penthouse in Manhattan with Sherlock Holmsian level of deductive reasoning skills keeping him one step ahead of the rest of his ex-teammates. His brand of self-assured know-it-all is an archetypal character, (think a slightly more likeable Varis from Game of Thrones) but Ellis’ control of his voice means that he feels far more like a rounded, three-dimensional person than a standard character trope taken to the page. Vivek’s poise and reserve also balances beautifully against Simeon, a character who is clearly the muscle of the group.

Simeon is the focus for this issue and his retrieval mission takes up the bulk of the episode. in terms of pacing, it’s a little more decompressed than the previous issue, allowing Shalvey to experiment far more with panelling than he did in “Injection” issue one. As with most heist set-ups, Simeon’s movements as he approaches a governmental consulate are intercut with conversation explaining his aims, his motives, and (most interestingly) his tech. Shalvey manages to strike a great visual balance between panels of people deep in discussion and dynamic, anticipatory panels that precede inevitable violence.

And the violence, when it comes, is visceral and well deserved. Ellis and Shalvey manage to set Simeon up as a paramilitary killing machine within a few pages, and his combination of training and planning enable him to make moves on the compound in a way that seems both understated and hugely impressive. Make no mistake, we’re not talking superhero-levels of carnage, rather the swift, severe actions of a very human man who knows how to get the job done. Shalvey’s art is perfect for highlighting the adrenaline rush of hand to hand combat. As the risk rises, the backgrounds drop away to little more than primary colours, creating a comic-book version of tunnel vision, forcing the audience to focus on the violence at hand.

In a book like this, with characters who are all so close to being super-human, it’s often difficult to maintain a sense of conflict or danger. Ellis and Shalvey have hit the sweet middle ground in that respect, with light touches of humanity shining through amid the chaotic otherness of their narrative. While issue two of “Injection” has a lot more forward momentum than its predecessor, it still feels like the opening adage for a much grander symphony. Anyone who’s enjoyed Ellis’ previous work on “Planetary” should totally be reading this already and, for those of you who are unconvinced after the first two chaotic issues, I firmly believe this is a comic that will ultimately be worth investing in.

Final Verdict: 8.2 – Every bit as engaging as the first issue, Ellis and Shalvey have me hooked again in a whole different way.