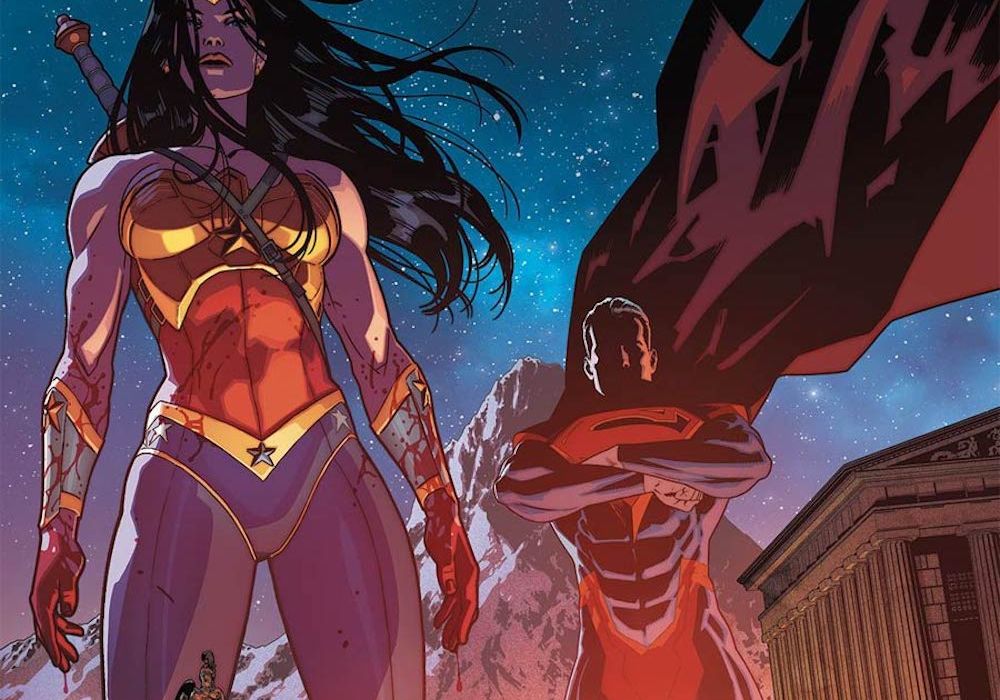 Taking elements from the 2017 film in addition to making other unique spins on the classic Wonder Woman origin story, the first “Injustice 2” annual offers a fresh take on an old tale. 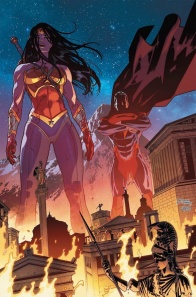 “Paradise Lost.” Ever since the overthrow of Superman’s regime, Wonder Woman—his most trusted ally—has been held a prisoner on her native Themyscira. How did she come to this low point? What is it about the Wonder Woman of this world that made her so very different from any other incarnation and susceptible to Superman’s brutal, world- conquering vision? When was love lost and when did the greatest heart harden? The tragic story is told here.

From the start, as early as the original comics for “Injustice: Gods Among Us” Year One, Wonder Woman has been a lot more confrontational and overbearing than her main counterpart. While at times this seems to make her into Wonder Woman virtually in name only, Kate Perkins and Tom Taylor help to solidify this version of the mythos and explain why she is so much more turned toward control instead of guidance.

Mixing together some elements of her 2017 feature film (such as her signature arm cross “divine blast” attack) with the World War II setting of most takes on the origin, Perkins and Taylor forge their way forward with an Amazon who is too strong for her own good, too attuned to combat, and woefully unaware of some intricacies of the world. Outside of those elements, which could still lead to a similar story, ‘Wonder Woman — of War’ follows the path of the famous “for want of a nail” proverb. A single change in her origin, a single thing out of place in the crux of her introduction to man’s world, and she went from the benevolent protector of the innocent to the vengeful slayer of the guilty.

Perkins and Taylor do something that seemed virtually impossible at this point: make Diana of Themyscira into a semi-sympathetic figure. As portrayed, she is a victim of circumstance, her view colored by certain deceptions and leading her down a path of extreme violence. Considering that the Injustice universe Wonder Woman is partially responsible for the New Regime itself, especially her part in Kal-El’s corruption from a hero to a tyrant, the fact that she could be turned around to a sympathetic figure again at all is a measure of how well Perkins is able to write Taylor’s concept.

Fittingly enough, her trail seems akin to a tragic heroine of the classical theater. She has good intentions, even noble ones, but misstep after misstep, deception after war crime after accidental injury, she turns away from the path of peace, and toward one of war. In her own way, she becomes a female, magical, daylight version of the Punisher of Marvel Comics fame, with readers well aware she has far further to fall. What makes her fall all the more tragic is that she doesn’t even seem to realize that what she is doing is wrong, taking everything through a single lens that she develops in the 1940s.

However, keep in mind: her methods are never treated as sympathetic themselves. Her turn to a burgeoning villainess is a slow process, with her mistakes, oversimplifications, and misunderstandings along the way, but the methods she uses by the age of superheroes are still treated as virtually heartless and abominable.

For those who are wondering, yes, there are several counts of neck-related violence in this issue. No, we still haven’t figured out why Diana is so hateful of that part of the body. Bad experiences with many-necked monsters seem possible… but I digress.

The side story at the end, with the Harley Horde, is less notable, but still fun. While there’s not much to say about it, it’s still fun to see them again, even if the stay is brief.

Artwork and coloring on this book differs between pages. On Themyscira and in the relative modern day, Marco Santucci works the art, while J. Nanjan is on colors. Lines are thick, but not to the point of a sillier style, more showing an otherworldly, superhuman bent beyond the scope of mortal man that is present with the Amazons and the later age of superheroes. Light and shadow play a large part in the mood, with the sadder scenes taking place in the darkness, and the brighter ones offering hope… well, usually, barring certain in-universe mistakes. Mostly, Santucci and Nanjan offer a contrasting art style to the world of man and of the more cartoonish, costumed actions of Gotham City.

In her time in man’s world in the 1940s, Diana and the soldiers in the war are drawn and colored by Jamal Campbell. The art speaks to 40s era advertisements, not unlike the art done on the “DC Comics Bombshells” series and the variant covers that inspired it by Ant Lucia. Using thin lines along with a hefty dose of dirt, grime, tears, and blood, Campbell manages to turn an old-timey art style usually fit to recruitment posters of the era into a visceral showing of the horrors of war.

For the finishing Harley Horde story, David Yardin takes all illustrating and coloring duties. His style is decidedly more cartoonish, befitting the more comic book style of the writing itself. With thicker lines and more emphasis on motion, including “splash” effects where contact is made with an object akin to sillier stories, Yardin helps to lighten the mood after the dour, dark preceding storyline.

In all, the various elements of this issue work together surprisingly well, re-forging an unforgivable villainess into a tragic figure without losing her menace or lessening the depth of her crimes against the world she once aimed to protect.

Final Verdict: 8.5– Very well done, new take on an origin story, with a fun side story afterwards as a palette cleanser for those who may find the former too dark.