Gary Gianni, creator of “The MonsterMen,” has made a “Hellboy” original graphic novel and it is incredible. 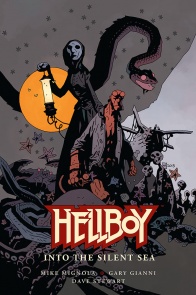 The “Hellboy” hardcover original graphic novels are always fantastic. I loved Richard Corben’s “House of the Living Dead,” and Duncan Fegredo’s “The Midnight Circus” blew me away. This format isn’t just for longer stories that don’t fit neatly into the issues, it is reserved for stories that are truly special. So the standard here is very high, and yet “Into the Silent Sea” absolutely meets it.

This has been in the works for a while. Mike Mignola deliberately left a gap between 2005’s “The Island” and 2007’s “Darkness Calls” with the intention leaving a space for Gary Gianni to tell a ghost story when he was ready.

Right from the beginning “Into the Silent Sea” feels classical. The art evokes etching plates and there’s clearly inspiration drawn from the illustrations of Gustave Doré, but there’s also some classic Hellboy narrative devices we haven’t seen for a while, such as using quotes from poetry—in this case, “The Rime of the Ancient Mariner” by Samuel Taylor Coleridge and “The Pilot” by Thomas Haynes Bayly. This is a technique that immediately puts me in the mind of “Hellboy: Conqueror Worm” or “Abe Sapien: The Drowning,” and right away it puts focus on the mood and atmosphere.

And boy, does “Into the Silent Sea” ever have atmosphere. This is a ghost story, and right from the beginning we have Hellboy casting off in a graveyard of ships in fog. It is a mere taste of what is to come. Whereas Mignola’s work is full of empty spaces our minds fill, Gianni’s work is full of lines that evoke swirling mist and crashing surf. Not to mention, he gives everything such an air of authenticity. It is clear that he knows 19th Century ships, and for a story that takes place almost completely on such a ship, that’s extremely important.

I should point out, Gary Gianni also cowrote “Into the Silent Sea” with Mike Mignola. The pair of them plotted it together, Gianni wrote the script, and then Mignola went over it to adjust Hellboy’s dialog and such. The result is fantastic, especially the dialog for The Rebecca’s crew in contrast with Hellboy’s. There’s a sequence early on with Hellboy tied to a mast, talking to The Rebecca’s Captain, both trying to get information out of each other. It’s the sort of scene that puts a lot of weight on the dialog to carry it, but you’d never know from reading it. The scene is engaging throughout, the lines delivered in such a way that they quickly reveal character, motivation, and mindset.

There’s also that element of a character out of his own time at play here. Hellboy’s from around 2005–2006 and he’s surrounded by characters that are from the late 19th Century. In this regard the story reminds me a little of “Hellboy in Hell,” especially “The Three Gold Whips” with Captain Dulot. I love the way Hellboy responds to people with self-important speech.

And then there’s one other story this reminds me of: “Frankenstein Underground.” It was a story used to explore some of the big mythology of the Hellboy Universe, and “Into the Silent Sea” is no different. While still being accessible for new readers, this story is built on some very old history. Long-term “Hellboy” readers are definitely going to get a kick out this book.

OK, I’m going to delve into spoiler territory from here on.

I have to admit, I was geeking out a lot with the Heliopic Brotherhood of Ra stuff, especially as they discovered Tunungar and the remains of a Hyperborean. Again, this is where having Gianni on art adds so much to the book. He evokes this era so perfectly that I can’t imagine anyone else giving these scenes the same energy. This is truly a unique story in the Hellboy Universe.

The thing is, Gianni can draw more than just boats and stuffy men from secret societies. In the last portion of the book, he utterly lets loose with an all-out monster brawl—and not a bunch of identical critters, but rather each one very specific and weird. This is clearly drawn by a guy who loves his monsters and takes pleasure in their design. As much as I love the “Hellboy” OGNs, I very sad they don’t have any sketchbook pages. I would have loved to have seen Gary Gianni’s design work beyond the comic’s pages.

As it is, I don’t feel like I’ve properly read “Into the Silent Sea” yet—Gary Gianni’s artwork does not work well with heavily compressed preview PDFs in low resolution. And yet, even in such a presentation, the pages have immense power. I simply cannot read this story quickly. I get sucked into the art, lingering on every panel. There’s so much attention to mood in this book, and I love seeing the way it’s modulated throughout.

In the middle of the book, there’s a flashback with a Hyperborean corpse that’s made to speak from beyond the grave. Near the end, the corpse says, ‘Give me back to the dark,’ and the flashback ends, returning to a panel with The Rebecca at sea, surrounded by black. The flashback sequence was already creepy, especially with its use of Victorian apparatus, but this final touch, a panel full of darkness, pushes it just that little bit further. It was the perfect flourish to end the scene so that the weight of it was felt throughout the next.

Gianni and Mignola’s control of atmosphere was my single greatest joy in reading “Into the Silent Sea.” They understand this sort of storytelling so intimately and have such affection for it. This is a tremendously satisfying read. Now I just need to pick up a real copy so I can read it properly!

Final verdict: 9.5. “Into the Silent Sea” is among the very best stories in Mignola’s Hellboy Universe. Gary Gianni’s work here is masterful.