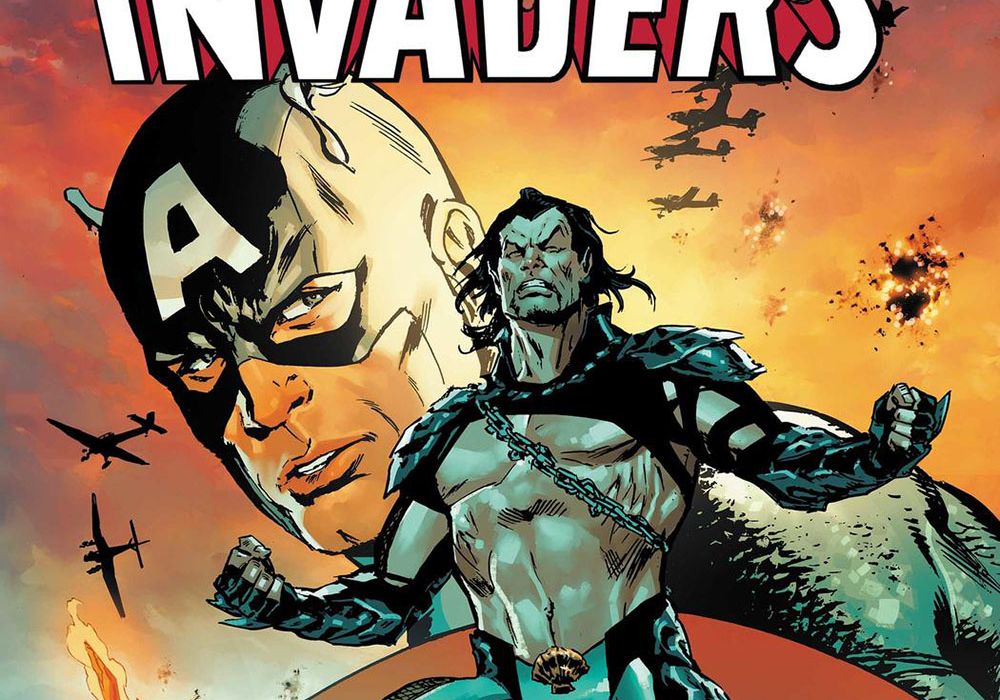 Like many modern Marvel fans, my familiarity with the Invaders is a little spottier than with most other properties. The team functioned mainly in WWII, and have reconvened since then, yet never with a particularly clear mission statement. Writer Chip Zdarsky looks to be changing this, as his current run focuses on Prince Namor as the antagonist of the Invaders. Can Zdarsky and the team make the prolific war team relevant again? 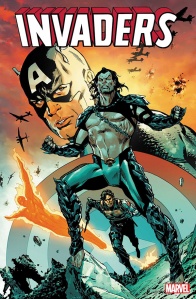 THE GREATEST GENERATION OF MARVEL HEROES IS BACK – TO STOP ONE OF THEIR OWN! In commemoration of Marvel’s 80th anniversary and springing from events in the pages of AVENGERS and THE BEST DEFENSE, the Marvel Universe’s first super-team is back! CAPTAIN AMERICA. THE HUMAN TORCH. THE WINTER SOLDIER. NAMOR. They fought in WORLD WAR II together as THE INVADERS. But now NAMOR is the enemy, a global threat more powerful than ever. His deadly plans are as deep and far-reaching as the ocean and REVELATIONS about his past could THREATEN the MARVEL UNIVERSE! It’s up to his old teammates to stop him, but what chance do they have against the man who knows their every move? “War Ghost” begins here!

As much as this is a book about the central WWII Marvel heroes, Zdarsky smartly chooses to focus on the most interesting and often forgone Namor, to the point that you could be forgiven for thinking this was his solo series. Coming fresh off an antagonistic stint on the latest “Avengers” arc and declaring world war against the surface, Namor is clearly a troubled character and harboring more conflicted thoughts than he appears, and Zdarsky paints this by having him constantly flashback to past WWII tragedies. Not only does this catch up newer readers to the characters, but it also humanizes him, giving him the qualities of the best kind of villains that you can sympathize with. Zdarsky shows us moments of Namor trying and failing to save a comrade’s life, attempting to block it out with partying and drinking, and finally submitting to grief at the funeral of his lost teammates. They’re great character moments but the ending of this issue seems to undercut them. We see two other Atlanteans watch in confusion as Namor talks to himself or an unseen apparition, discussing that “THE KING IS MAD”. It seems like an easy way out of working with a complex character but also could be Zdarsky misdirecting the readers skillfully.

Speaking of flashbacks, however, Zdarsky manages to weave between the present day and the past without jarring the reader too much. This is largely done through the different art styles used for each segment, but the narrative and character work feels distinct so that even just reading the dialogue you can tell when a shift has occurred. Opening with a flashback, we get a much more humanized, youthful and passionate Namor, who fights against impossible odds to save a comrade, taking the idea of being superhuman to heart and truly embodying the concept of great power and responsibility. Then we get a shift to two scenes focusing on Namor and Cap, with both of them representing the best that continuity has done to them whilst retaining everything that made them interesting in the first place. The present Namor is much more world-weary, feeling more restrained and thoughtful, yet still, by the very nature of his warring acts, bares his teeth in arrogance. Captain America also embodies modern traits like thinking about how robots and biographies work, yet still spouts era-relevant lines like “I THINK THE WORLD COULD DO WITH REMEMBERING THE WAR RIGHT ABOUT NOW.”.

Carlos Magno and Butch Guice handle the art duties in this book and it makes for a solid looking superhero fare with alternating artistic styles to contrast time periods. The opening scene gives us an aesthetic that feels more classic and noirish, like Steve Epting on “The Winter Soldier”. Presumably, this is Butch Guice, who does well at conveying facial expressions pushed to the extreme. Namor crying out at the sudden deaths of his contrast is powerful because Guice makes it such a big deal in Namor’s expression. As an alternative, Magno’s art style has a much more modern sheen and level of added detail to it, whether it be a positive element or to its detriment. The positive is that it makes scenes like the fantastical environments of underwater Atlantis look spectacular, from the high walled inner circles of Atlantis to the shiny architecture of Karris’ city upon Namor’s arrival to it. The two artists and time periods feel different enough to visual contrast them, yet share enough realistic similarities that they don’t feel totally separate in the same book.

I have to say that I find Guice’s, or as far as I can tell, the WWII artist’s setting work to be more effortless and interesting than Magno’s, or the modern day artist. Guice has a good eye for combining the busy, chaotic nature of war with the quiet, uneasy stillness that can pair with it quite frequently, too. From drawing bombed out WWII shelters, to drawing small 1940s American bar corners, which have an air of isolation but still some sense of customer draw as Steve and friends always seek the peace and quiet out. Magno doe s a good job at rendering the Atlanteans in stark natural space, and for a more realistic and grounded take on the Marvel universe, this does work to some extent. However, it comes off more as disappointing when we see the limited glimpses of shiny, post-modern architecture against the more frequent static and still backgrounds of water bodies. The two have different styles, but Guice ultimately draws with a feeling of effortlessness and adds to the story with so many subtle details picked up after years of storytelling.

Alex Guimarães handles the coloring here and shows that this book has a super wide palette, due to its many settings, eras, and environments. The WWII scenes are deliberately muted, and yet Guimarães manages to slip in little splashes of vibrancy – like the aqua blue sky behind Namor as he resolves to save his comrade. The modern palettes are much less reliant on whites and negative space, choosing instead to feel more HD and cinematic feeling. The opening scene of Cap in the present is full of heady neon purples, reds and yellows, and pops up compared to the preceding one with relative ease. Having Cap stand amidst a red background of slaughtered robots while Jim places him on a sickly green computer screen, feels like the type of subtle technologic evolution that keeps this book looking distinct and fresh. Again, I’m not sure the extent or exact nature as to how Guimarães and Guice work, but both seem to work off each other exceptionally.

“Invaders” #1 shows that there is still fun story potential to be found in an old team and still room to give them a fresh interesting mission statement. Zdarsky puts most of the focus successfully on Namor, and fits the other in nicely around and secondary and complementary characters to Namor and the team’s life. Guice and Guimarães contrast each other well with retro and modernist comic takes to show both sides of the Invaders’ careers. This was a solid charcater dive, and I can’t wait to see what’s next.

Final Score: 7.8 – A solid look at Namor as an antagonist, “Invaders” #1 finally manages to inject the WWII team with purpose.