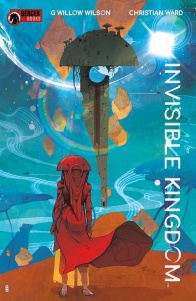 Set in a far-flung star system, this new epic sci-fi monthly saga tells the tale of two women—a young religious acolyte and a hard-bitten freighter pilot—who separately uncover a vast conspiracy between the leader of the system’s dominant religion and the mega-corporation that controls society. On the run from reprisals on both sides, this unlikely pair of rebels risk plunging the world into anarchy if they reveal the truth. But when your beliefs betray you, what choice is there left? By Hugo Award-winning writer G. Willow Wilson (Wonder Woman, Ms. Marvel) and Eisner Award-winning artist Christian Ward (Black Bolt, ODY-C).

Wilson thrusts you headfirst and helpless into this fantastic world with the very first page. The scene is set with our Captain Grix trying to land their damaged cargo ship full of passengers on a moon without crashing or damaging the goods – inanimate or alive. We get a good sense of the sci-fi scope of the world in that there are cargo ships and trading, and we get a good sense of Grix as a headstrong, over-confident protagonist who loves to ignore warnings and dive into danger.

The next scene opposes this significantly, as we move away from the free-wheeling, romanticized adventure, into the xenophobic capital city of Duni. We meet Vess, a hopeful acolyte of the Siblings of Severity. She walks blindly through the capital as part of a pilgrimage, enduring slander from strangers and being forced to walk unaided by food or drink. Although the onlookers are skeptical of Vess’ journey, the innate trust that was shown to Grix in the first scene isn’t present here. Vess is alone, isn’t in a position of authority, and isn’t totally confident in her abilities. But Willow cleverly connects the two as having an unwavering determination, that they both continue on a path they feel they know to be right, despite the questioning of outsiders.

Wilson then subverts the expectations of the readers in the climax of the story. Both of these characters are either on their way to or working in professions or callings that they feel are right for them and are just. Grix is more begrudging in her profession, especially after performing diagnostics after the crash, but she ultimately accepts that everyone’s still doing their jobs. However, we then see both protagonists find out a controversial detail about Lux funneling large sums of money. This is especially big for Grix considering that Lux are her employers, and Wilson unpacks this rage really well, discussing the concept of still having to work to earn a living even if it’s for an unethical employer. It’s interesting how this is explored on Vess’ side, however, as we see more of the buildup of the Siblings of Severity as a forgiving place, leaving the last page twist that Vess’ finds out that they, too, are involved in the scandal. We get to spend more time with Vess in the dark about the scandal whilst aware that it is occurring, and Wilson uses that to color our perceptions of Vess’ time in the monastery.

Christian Ward’s art is so uniquely identifiable on the page, and that helps a lot in establishing an identity for “Invisible Kingdom”. There is a unique busy-ness to his work here, that again starts with the opening scene and helps to immediately immerse you in the world. The first panel is a well composed but busy-feeling shot of a ringed planet with text emblazoned on over it like a screen. The very next panel, Ward has Brix’s ship crash through the screen like some pseudo-fourth wall breaking nonsense, and without context, the reader is thrown into fantastical visual chaos.

The cityscapes are delightfully busy in this way too, evoking a metropolis that feels as packed as Blader Runner but with a modern veneer that gives it a soft, vibrancy, leaning more to European sci-fi than any tradition Hollywood stuff. There’s an establishing shot of Vess walking through Duni being harassed by its locals. There’s hard lights and colors bouncing off the architecture of the shot, while Ward slowly zooms in with each panel to highlight the action with Vess and her savior appearing later in the sequence, that gives a very palpable sense of motion.

One problem I’ve had with Ward’s work in the past is that his facial and body language can sometimes feel a little forced or disproportionate. This isn’t so much the case here, and that might be due to the fact that he’s working primarily with alien physiology, but it’s super smooth. There’s a great shot about a quarter of the way into the issue that reflects the idea that Vess and Grix are on the same path, with two subsequent panels showing the two characters in each set both bearing the same visage of determination. This is the only time the two characters really synchronize, however, as Ward makes them individually unique outside of this. Grix cycles through grit and cynicism whilst piloting the ship, and Vess bears the remarks of city-dwellers with weariness, and witnesses the monastery with a sense of naivety and awe.

Ward’s colors are unmistakably a huge part of his art’s appeal and are in full force in this issue. The cityscape of the capital of Duni highlights this well, as the base palette of the architecture is browns and navies, but Ward plays with highlighting that with lots of different advertising colors: neon pinks, blues, and oranges to draw the eye. The space settings also play out with a sense of psychedelia and grandeur. The splash of the Lux ship crashing on a moon is a great blend of a whole spectrum of galactic-feeling colors, all smudging, blurring and standing over each other simultaneously to give a truly otherworldly feel.

Berger Books has shown that it’s an imprint to keep an eye on, and with G. Willow Wilson and Christian Ward’s “Invisible Kingdom” #1, they’ve given us yet another essential entry into the modern comics canon. This is a well-constructed piece of sci-fi work, one that looks visually like a unique blend of American and European sci-fi elements, and tells like a super relevant tale with fantastic characters.