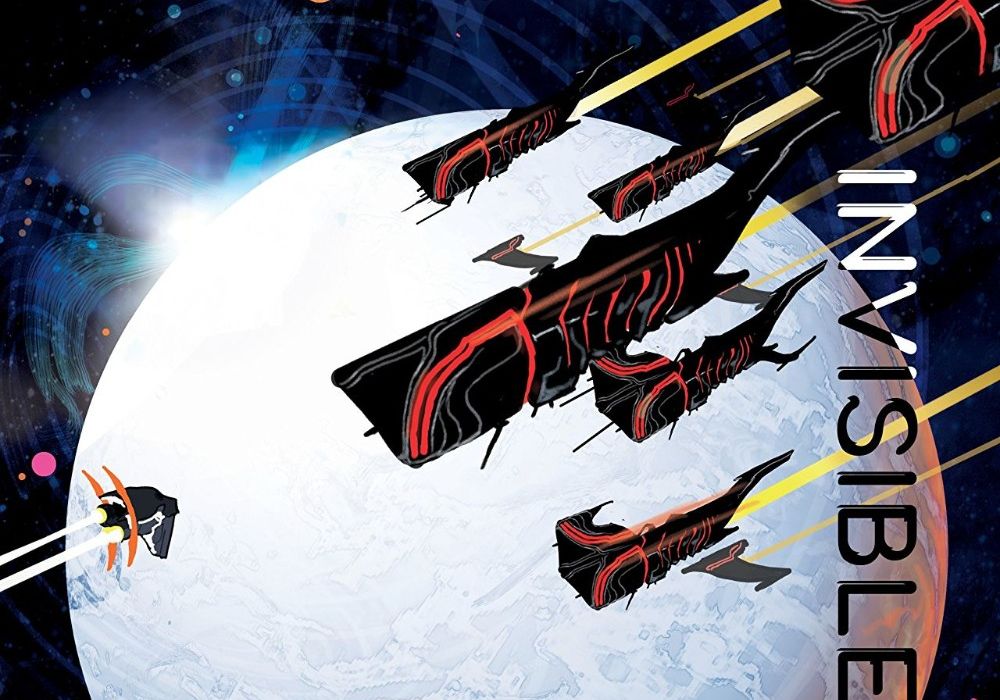 At its core, the idea of religious faith is a pretty simple concept. You follow the rules set down by a vast, unknowable deity and/or deities and you’re rewarded with a pleasant afterlife when you die. Unfortunately, the real world has a nasty habit of making things a little more complicated than they need to be, and it’s in this tug of war between the ideas and practical realities of faith and religion where “Invisible Kingdom” shines. 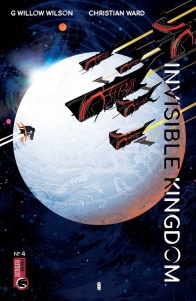 Suddenly, Vess is the Sundog’s unlikely new crewmember, and Grix is at the forefront of an unexpected battle–but their earth-shattering discovery won’t shake their faith or ferocity. They’re unquestionably in this together . . . but who will help them? And how much time is left before Vess and the Sundog are captured . . . or worse?

The fourth issue of “Invisible Kingdom” opens with a scrappy ship captain named Grix making a desperate escape from a religious order known as The Renunciation with a young initiate named Vess, who has discovered important information that The Renunciation is determined to keep secret at any cost. While the two manage to escape into space on a rundown cargo ship, they find themselves in a classic “out of frying pan into the fire” scenario where they realize that they are stranded in the middle of space, on a ship that is rapidly running out of fuel, and smack dab in the middle of an intricate web of politics, religious fervor, and business that is run by powerful people who are willing to do whatever it takes to maintain the status quo.

G. Willow Wilson is the perfect author for this kind of story, and she delivers a script that talks about faith and religion with all the weight and passion of someone who genuinely believes what she is talking about. If the name doesn’t ring a bell, Wilson was the author behind the excellent “Ms. Marvel” series back in 2014 and has made her Muslim faith an integral part of her writing. While The Renunciation is a fictional religious order, it provides Mrs. Wilson with the tools to talk about how religion and faith interact and influence every day secular life. While the devotees of The Renunciation take vows of poverty and do everything they can to remove themselves from everyday life, they still exercise a tremendous amount of political and social power. That, coupled with their seemingly strange dress and strange habits, lead a lot of ordinary people to treat them with distrust and exasperation. However, while Mrs. Wilson does a fantastic job of showing what ordinary people think of The Renunciation through Grix and the crew of the merchant ship, the real standout of the story is Vess.

Vess is a very rare breed of comic book character: a highly devout and religious individual who isn’t a complete nut job, horrifically corrupt, or a fraud. When presented with the idea that her religion is a lie she responds with her conviction that, while the people she may depend on for guidance may be corrupt and lost, it doesn’t mean she should simply abandon her faith and belief in something bigger than herself. It’s interesting to see a character stand up for their beliefs in a way that isn’t antagonizing or mean spirited and it’s wonderful to see a story that shows readers that faith and belief in divine mysteries still have a place in a world where space travel and intergalactic politics exist.

Speaking of the divine, the artwork is face-meltingly gorgeous. While I normally think that a comic book made up of people sitting in a room just talking to each other is a bit boring, I’m willing to make an exception if it means looking at more art like this. Artist Christian Ward has a very soft and gentle line to his work but injects each panel with gorgeous swaths of color and light that make the comic look more like an Impressionist painting that you could just stare at for hours. The religious garb of The Renunciation deserves special mention since it is instantly recognizable with its bright orange and red garb and hat, making Vess instantly recognizable amid the blues and greens of Grix, the ship, and the rest of the crew.

Interestingly enough, the art is at its best when it’s showing almost nothing at all. For anyone who might not know, there’s this term that a lot of comic book art aficionados toss around called the “Kirby Krackle”, which was a group of black dots and fractals utilized by the great comic artist Jack Kirby to inject his art with a ton of energy and life. Ward uses something kind of similar in his art to show that the void of outer space isn’t empty, but teeming with activity and action and it is amazing to look at. It’s almost like the artwork is reinforcing the idea that there is some sort of higher power out there in the vast unknowable reaches of space, but I have no idea if that was the intention.

If I have one complaint about the comic, it’s that the artwork can be a bit muddled. The escape of the crew from the monastery is certainly a good and well thought out action set piece, but the gorgeous smears of paint and bright colors that I spoke so highly of, coupled with the strange panel shapes and layout, do make the action a bit unclear at times. Thankfully, this isn’t much of a problem because once the action has died down, the book focuses on the crew they are and what they can do to fix the predicament they’re in.

It’s safe to say that “Invisible Kingdom” is a very personal story and much of the author’s personal thoughts and beliefs are on display. It all comes together with gorgeous artwork to create something that hasn’t really been seen in the world of comics before.

Final Verdict: 8.8 A deep, meaningful, and thought-provoking comic with gorgeous artwork that will challenge the reader to really think about how personal faith and belief can exist in the modern world.