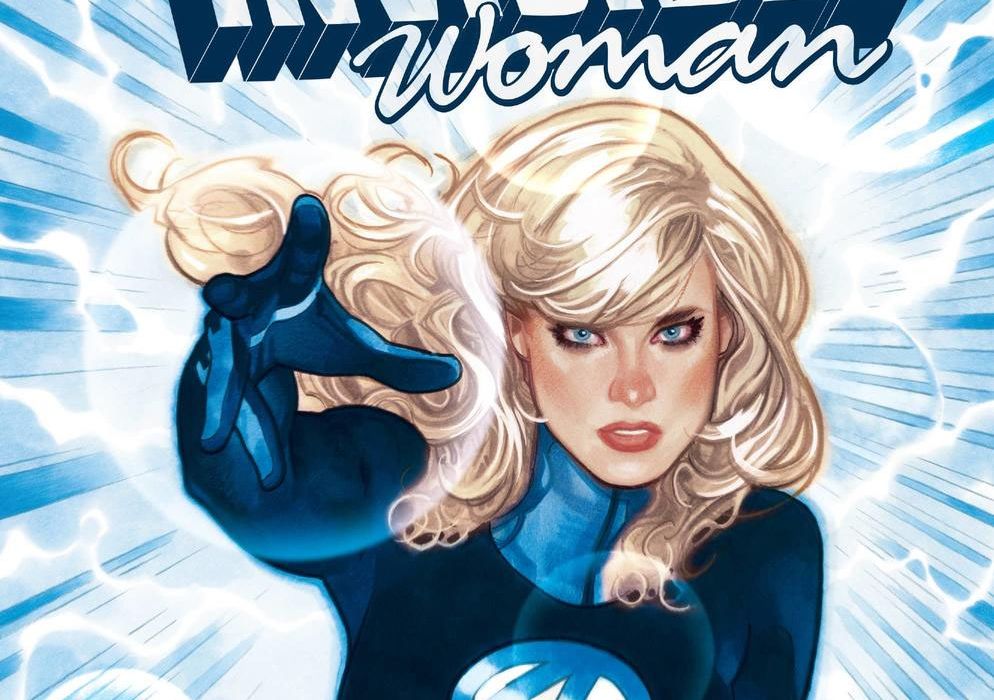 The Fantastic Four! A brilliant scientist–his best friend–the woman he loves–and her fiery-tempered kid brother! They aren’t just another superhero team, they’re a family. They’ve been joined at the hip since conception…so “Invisible Woman” #1 really is a special occasion. It’s rare that any of the FF fly solo and this marks Susan’s first-ever mini-series! Let’s see what she gets up to apart from the family. 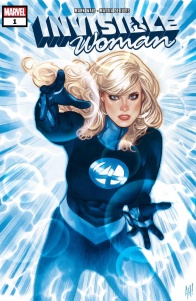 Written by Mark Waid
Illustrated and Colored by Mattia de Iulis
Lettered by VC’s Joe Caramagna
Fresh from the pages of FANTASTIC FOUR, for the first time Susan Storm-Richards stars in her own limited series – and the secrets about her past revealed therein will shake readers’ perceptions of the Invisible Woman forevermore! Years ago, she undertook an espionage mission for S.H.I.E.L.D. – and now it’s up to her to save her former partner from death at the hands of international terrorists!

“Invisible Woman” #1 reveals Susan Storm’s secret, one might even say invisible (a terrible pun, but I couldn’t resist), history with S.H.I.E.L.D. Unbeknownst to others, Susan occasionally runs missions for the super-spy organization. When her former partner, agent Aidan Tintreach goes missing, it’s up to the Invisible Woman to go rescue him.

If you had no idea that Susan Storm-Richards was an occasional spy, don’t feel too bad. The writer Mark Waid is following up on a concept he introduced fairly recently in 2014’s “S.H.I.E.L.D.” #4. That’s the only other mention of her extracurriculars as far as I can tell, but I may be wrong. I for one find it to be a welcome development for the character. It helps set the Invisible Woman apart from the others in her family and she might need that distinction the most.

If you ask a child to describe the FF to you, they would probably just sum Susan up as the girl of the group. Within the Fantastic Four, her identity seems the most tied to her relationships with the others. Sue is Reed’s wife, Johnny’s sister, Franklin and Valeria’s mother. While this is her first mini-series, her brother the Human Torch has shared a mini-series with Spider-Man. Ben has held down two minis as well as an ongoing. Reed hasn’t had a mini but the Fantastic Four tends to revolve around him anyway. He’s Gladys Knight and they’re the Pips. It’s really nice seeing Susan singing lead for once.

As the first issue, there’s some obligatory setting up the pieces in “Invisible Woman” #1. There’s really no getting around it. At the start of the comic though, that exposition is awesome. We’re treated to an engaging flashback of Susan in the middle of a European S.H.I.E.L.D. op. It’s all super-spy action, reminiscent of James Bond but with a superhero twist.

After the introduction though, the issue starts to slow down. Again, exposition is necessary but I feel like some of the bits could have been skipped. For example, the disagreement with Mr. Balenthorpe. When he tells Invisible Woman she’s not to go after her former partner, it’s probably meant to be a dramatic moment. It just made me chuckle though. I mean, has the guy seen…any movie ever? The hero never stays out of anything. You’d think he’d have the common sense to know that.

We don’t need Colonel Fury telling Susan she’s in over her head either. He reasons that this mission will require lethal force and that’s a line Susan isn’t willing to cross. That’s a conflict the whole mini could avoid all together. Susan’s not going to kill, we know she won’t…why even tease or act like she’s going to struggle with that?

Still the issue feels like a promising start. The ending is especially strong and has me hooked for the second issue. Black Widow makes for a great guest star in this mini-series. She’s one of the only other superheroes/spies and will probably provide an interesting foil to Susan. While the Invisible Woman has firmly decided to keep her espionage work a secret and a part-time job, Natasha’s role as spy and superhero are practically indistinguishable. Black Widow’s firmly in both worlds while Sue’s only stopping by for a visit.

Another strength of “Invisible Woman” #1 is the artwork. Mattia De Iulis does great work here. It’s always interesting to see how artists depict invisibility. Some do a white outline while others go the direct route and draw absolutely nothing at all. Iulis depicts Susan as see-through and transparent, an impressive feat in my book.

There are plenty of standout visual moments here. The action in the flashback is particularly dynamic. I chuckled at Susan physically pulling the stretchy Mr. Fantastic towards a date night and liked her subtly snatching Aidan’s file off Balenthorpe’s desk before they were even finished talking. I especially adore the full page of Susan after the flashback mission. Mattia De Iulis really makes it clear in that page that it’s time for her to go back to her role as a superhero. Susan floats proudly on a force-field, standing with her hands on her hips a la Superman in her classic costume with the sun rising behind her. It really is a beautiful page and I hope the art is just as fantastic in the issues to come.