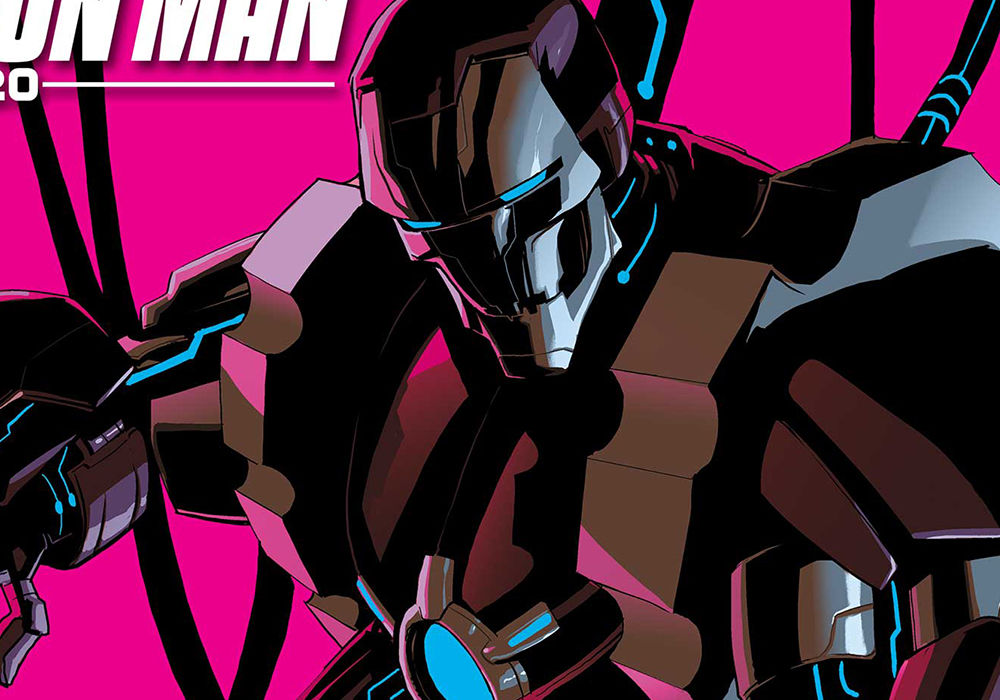 Marvel has had a difficult time determining how to approach the Iron Man property. Despite a high-profile film franchise, the publisher is struggling to find a place for Tony Stark as a solo hero. Marvel’s resolution to make Iron Man fresh again appears to be bringing Tony’s brother Arno into the spotlight in a brand new ongoing series. “Iron Man 2020” #1 is the beginning of an all-new Iron Man saga switching the mantle of Iron Man to Tony’s brother Arno. If the change appears to be sudden that’s because it is. Writers Dan Slott and Christos Gage have a lot to answer for in the ongoing series. Thankfully, Slott and Gage’s familiarity with the property is being complemented by the excellent Pete Woods who is contributing interior art to the series. Will “Iron Man 2020” be the new direction the franchise needs in order to stay interesting? 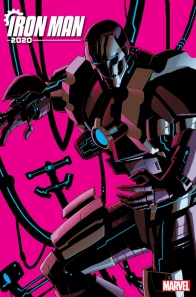 • The future is now! Artificial Intelligences presents a clear and present danger to humanity and must be brought to heel!
• The Robot Rebellion battles for the establishment of robot rights!
• And Arno Stark IS Iron Man!

Marvel is bringing a radically different approach to the Iron Man property with “Iron Man 2020” #1. However, this big change doesn’t mean it is the one shift in tone the franchise needed. Writers Christos Gage and Dan Slott continue the tone from their main Iron Man series for the new incarnation of the title. “Iron Man 2020” #1 keeps the reader at arm’s length during the introductory phase of the title by isolating Arno. Readers are shown the odd and strained relationship Arno has both with his parents and the people in his company. Slott and Gage aren’t able to come up with a reason for readers to invest in this new incarnation and status quo for Iron Man.

With a script that has trouble finding a human connection with readers, “Iron Man 2020” #1 is not enhanced by having a robotic villain. I wish there was more of an emphasis by Slott and Gage on the relationships between Arno and the people around him. There are some interesting and jovial moments with Machine Man and the group of villains in the series. The comedic villain scenes have trouble finding the right tone and stand out amongst the rest of the issue. Arguably, the best part of the issue is when Slott and Gage have Arno go up against the villains in the story. Seeing the adversaries of the book dart glances at each other halfway through the issue is some of the best material in the book.

Artist Pete Woods delivers solid, but somewhat forgettable interiors in the issue. Woods doesn’t strive for fascinating layouts or super polished pencils. The black background behind the interior art doesn’t quite strike the right tone with the direction Woods is trying to evoke in the issue. One positive aspect of the art is just how expressive the characters can be at times. Woods adds a lot of intrigue to body language in the scenes where villainous machines are lurking in the background of the pages. Seeing Woods use his art in the concept of a more futuristic setting should be the perfect vehicle for his talents yet the artistic direction in “Iron Man 2020” #1 feels behind the curve.

I definitely appreciate how much continuity is referenced in the issue. The back matter of the title gives readers a better understanding of some of the directions where Slott and Gage are planning on taking the characters in future issues. Also, it is great to see just how many robots Woods can cram into each panel. I can’t help but give the splash page full of robots major props from an artistic and scripting standpoint. There are lots of Iron Man easter eggs from previous continuity on the page.

The other major saving grace of “Iron Man 2020” #1 is the fascinating new story direction for Tony Stark. The conclusion Slott and Gage have found with the character are a couple of examples of some of the most daring scripting content in the issue. If Gage and Slott advance Tony’s plot modestly I would be fascinated by watching his aspect of the story develop. The downside to “Iron Man 2020” is how little investment the readers are going to have for the main character. In “Superior Spider-Man” readers had a better idea of who Otto Octavious was as Spider-Man. Slott was also able to differentiate The Superior Spider-Man and the classic Spider-Man more easily in tone.

The House of Ideas is continuing a bad habit of squandering a true direction for Tony Stark and Iron Man within the context of modern Marvel. “Iron Man 2020” #1 attempts to swing for the fences but doesn’t find the heart readers need for a permanent change. Due to the pedigree of the creative team, I have a hard time determining why the issue wasn’t able to deliver more from a creative standpoint. Readers only get the slightest hint at what could be coming next for Iron Man. Slott and Gage have a lot of work to do before Iron Man is ready to make a splash in The Modern Marvel Universe as Arno Stark.

Final Verdict: 5.0 – “Iron Man 2020” #1 is a boring, emotionally distant debut for what should be a triumphant new direction for an irreplaceable hero.