Brian Michael Bendis may be a DC exclusive writer now, but for years he was Marvel’s golden boy. During that time, he created several breakout characters. Maria Hill. Daisy Johnson. Jessica Jones. Miles Morales. His last big character, the one he spent the least time with, was Riri Williams. How does the character fare with another writer? Read on to find out! 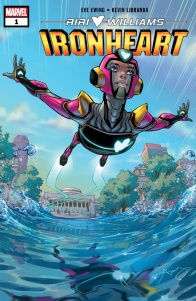 THE FORMER STAR OF INVINCIBLE IRON MAN HEADLINES HER OWN SOLO SERIES! When a group of world leaders is taken hostage by one of Spider-Man’s old foes, Riri Williams will have to step up her game. And she’ll be stunned when someone from back in Sweet Home Chicago enters her life… CHAMPIONS artist Kevin Libranda joins award-winning poet Eve Ewing, as Ironheart steps boldly out of Tony Stark’s shadow to forge her own future!

This comic is long overdue. Riri Williams might have headlined a title before but “Invincible Iron Man” never really stopped being about Iron Man. Riri’s ‘J.A.R.V.I.S.’ was an artificial intelligence completely identical to Tony Stark. Ironheart was less of a star and more of a co-star. She was joined by Iron Man’s supporting cast (Tony’s biological mother, Amanda Armstrong, for example), had to clean up his messes and faced his enemies. Often, she played either the role of Tony’s fangirl or his proxy. Riri was a great concept but the execution could have been better.

Fortunately, the execution is better this time around. Eve L. Ewing is a great fit for the title. Like Riri Williams, she is both a black woman and Chicago native. The writer has expressed that she is a big fan of the character and wants to do Ironheart justice. The solicit for this issue promises that “Ironheart steps boldly out of Tony Stark’s shadow” and it certainly delivers on that.

The best part of this issue is Riri’s characterization. The heroine had some good moments in “Invincible Iron Man” and “Champions”, but apart from her mentor and a new team, she can really shine. Like many superheroes, Riri has suffered great tragedy. She never knew her biological father, who passed before she was born. Her stepfather, who helped raise her, and her only friend, Natalie, were violently killed in a drive-by shooting. This may not seem that horrible when compared to the exploding planet Krypton, but Ironheart’s tragedy seemed excessive and over the top.

Ewing explores her backstory with a bit more tact. The comic opens with Riri soaring above the clouds, but she is quietly plagued by survivor’s guilt. Though flight is clearly an amazing experience for her, it is still a bit of a somber moment. She touches down at M.I.T., having returned to her studies after she left to be a superhero. Riri is forced to give a tour of her lab to visiting dignitaries which clearly annoys her. Throughout the issue, Riri is pretty awkward in her interactions with others, which makes perfect sense. She is a teenager thrust into an adult setting and before the Champions, Natalie was her only friend. Ironheart is more at home tinkering than dealing with people, of course, she misses out on some social cues.

Later in the issue, Riri has to save those same visiting dignitaries from Clash. Clash is an inspired choice for an enemy. As a science-based villain, he offers a problem that Riri cannot simply punch away. The heroine is forced to get creative and use her super-genius to save the day. However, even that is a bittersweet moment. The isolation is getting to her.

Fortunately, it is short-lived. Her neighbor Xavier calls her up and manages to get through to her. The two have a genuine connection and a conversation that reveals even more about Riri. She’s into cosplay. She has an appreciation for black Star Trek characters such as Captain Sisko or Geordi La Forge. She likes video games and Nina Simone. In a truly touching moment, Riri explains exactly why she became Ironheart. She was simply tired of being afraid. There wasn’t as much characterization under Bendis’s pen.

The final twist is fantastic too. Upon first read, Riri mentioning that she was analyzing her dreams to synthesize the perfect A.I., just seemed like an off-hand comment. It seems that the perfect complement to Riri is none other than her best friend, Natalie. An inspired idea that helps move Ironheart in a different direction.

The art is also superb. The opening double-page spread of Riri flying is amazing. The expressions are beautifully drawn and readers can clearly see Ironheart’s emotions, like the determination on her face when she fights Clash, features lit up by the heads-up display. The armor looks good, inspired by Iron Man while being original at the same time. Even the simple image of Riri’s messy desk helps develop the character. Little touches like the half-eaten bag of Hot Cheetos, the picture with her mother or the Funko Pop of teammate, Amadeus Cho, are much appreciated.

This issue marks a fresh start and is a great jumping on point for readers. Riri Williams feels like a three-dimensional character under Ewing’s pen. Ironheart is determined, corny, fearless, awkward and highly intelligent. It’s her time in the spotlight and it’s shaping up to be a great time indeed.