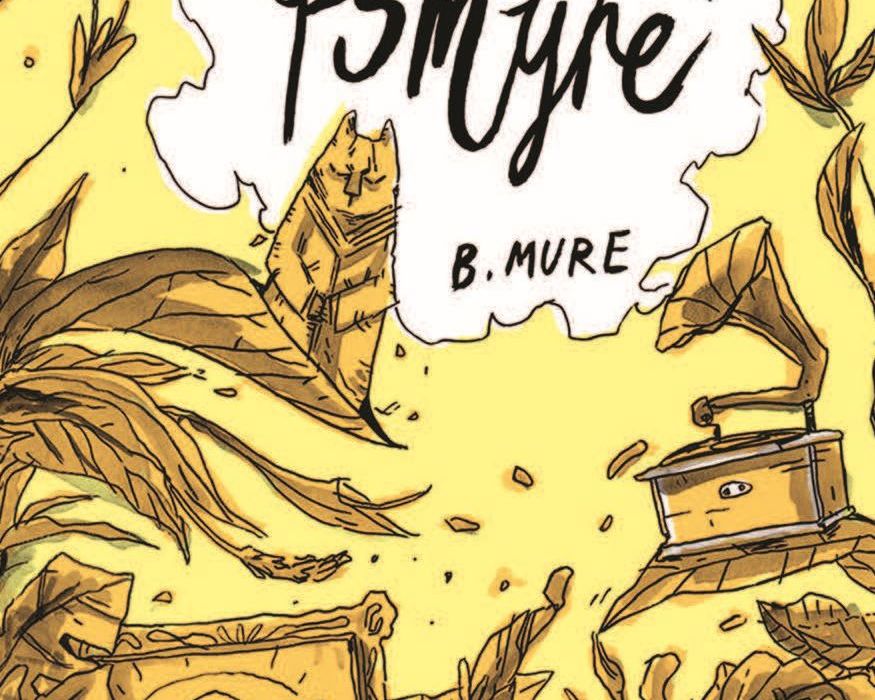 “Ismyre” is a kind of magic. The gentle kind, that leaves an impression that you can never quite be sure of. It is a book that invites contemplation, dealing in its short length with issues of loneliness, city life, the search for inspiration and many others. Yet this gentleness also seems to hold the book back, unwilling as it to commit fully to the implications of its magic-realist setting, leaving this reader wanting a more than he was given. 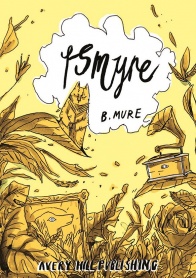 Cover by Mure
Written and Illustrated by B. Mure

In the city of Ismyre, Ed the sculptor works as his widower neighbour sings strange melodies late into the night. He places the finished figuring and notices there is an empty space on the shelf where another one should be. Perplexed, he sleeps, whilst his neighbour continues to croon. Meanwhile, across the city, a government building explodes into a mess of plants and flowers. Exploring themes of loneliness in cities, ecology, craftsmanship and the self-doubt that goes with making things; Ismyre is a quiet and fantastical mystery tale, set in an old world of ordinary magic.

I like books about cities. I like movies about cities. But what I love are comics about cities. Comics that are invested in giving us an exact sense of time and space, whether this space is real or imaginary, are my jam and cup of tea: the historical “Berlin” of Jason Lutes, the futuristic Mega City One in the “Judge Dredd” stories of John Wagner, London in “From Hell” by Alan Moore and Eddie Campbell – half real, half mythical. Maybe it comes from growing up in a small kibbutz of less than 500 people, seeking a sense of being that can be found in the teeming masses, or maybe it’s simply because storytellers who care about defining environment properly care about all the other stuff that make a good comic book as well.

The problem of “Ismyre” is that it is, supposedly, a graphic novel about a place (and the people in it) yet I get no strong sense of location from it. The protagonists, Ed and his new magician friend, live in one small section of the city and the mayor, serving the role of incompetent / disconnected government lives in in his palace. There doesn’t seem to be any ground connecting the two – they are as islands flying in the ether.

Ismyre is a fantasy-ish city – populated by anthropomorphized animals with magic being seen as rather common. There is a ‘mayor’ but what he lives and works in a place that is closer to a palace than a functioning office building and limits of his powers are unclear. Also unclear – what is the world outside Ismyre is like, or what do the majority of the people think about how their lives are governed. I don’t need all the questions answered, but I do need to get the sense that the author knows, and I don’t get this sense here. Possibly this is the result of slimness of the volume, less than a 100 pages, which doesn’t allow much space to explore the… ah, space of Ismyre. Possibly this is me wanting something other than what the author is even trying to provide. But the end result is all the same – this not quite the book it could have been.

But, despite the problems, there is much to recommend about this graphic. Where it falters in depicting the wider social elements it succeeds in presenting the small and personal spaces: there is genuine warmth to growing relations between Ed and Faustine, and the depiction of the process of creation, the creative block that leads one to do anything but the project they were meant to do, will probably have many of readers nodding in agreement.

This warmness manifests itself not only in the writing but in the unique style B. Mure brings to their pages – with colors mixing and shifting into one another, and characters often drawn with pencils over the colors of the background. It creates a lovely effect of world that is always moving, yet never in a violent manner. It’s one of these things that shouldn’t work yet somehow does – the reader is never confused or disoriented and the characters, despite their inhuman design, always feel like real people. B. Mure’s skill as an artist also translates to the lettering – which give a flowing and lush sense without ever becoming over-done; they feel naturalistic to the world of comics, just as much as an expression of the charters as the art itself.

I’ve mentioned how this graphic novel excels in the personal and you can see that specifically in the way Mure illustrates facial expressions and body movement. The designs of characters are often simplified, a few clear strong lines, but this does not stop the art from being fully expressive and attuned to the full emotional range of each scene. People move, people act, people react and it feels correct. Much of the plot of the book is limited to interaction between two characters, as Ed and Faustine hang together, but it never feels like a “talk scene” comics – because B. Moore knows not only when to cut to another scene but also because they understand how to structure a scene, how to keep the rhythm of the page flowing.

There’s a mystery element to the story, though it is rather minimal. The solution ‘works’ within the, faintly defined, rules of this world; but truth be told when it came I almost didn’t noticed, I was far more captivated by other elements of the story. Maybe it’s because there wasn’t enough build-up, again comes the matter of the lack of space, and maybe it was because B. Mure genuinely wrong-footed me. You think this story is one thing but it turns out to be something quite different.

“Ismyre” is far from perfection, again the matter of world building which is lacking, but it a bold declaration of style and artistic prowess. Whatever B. Mure choses to do in the future it is most definitely something to look for.