Brenden Fletcher and Karl Kerschl bring us “Isola,” the series originally announced at 2016’s Image Expo. Yes, it’s been a longer wait than expected, but I assure you, the wait was worth it. 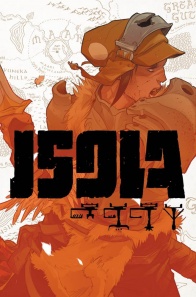 Childhood friends Brenden Fletcher (Motor Crush) and Eisner Award-winning storyteller Karl Kerschl (Gotham Academy) reunite on the comics page with a breathtaking fantasy adventure two decades in the making! The captain of the Royal Guard has fled the capital city with the Queen of Maar, suffering under the effects of an evil spell. Captain Rook’s only hope of returning Queen Olwyn to her throne and saving the kingdom from impending war lies on an island half a world away—a place known in myth as Isola, land of the dead. Featuring lush color work by MSassyK (Gotham Academy) and letters by Aditya Bidikar (Motor Crush). Recommended for fans of Studio Ghibli and the work of Hayao Miyazaki.

I can imagine the frustration in writing the solicitation copy above for “Isola.” Yes, technically the plot is about the Queen of Maar, a looming war, and the journey to Isola, the isle of the dead… and yet that’s not what the story is about at all. The conflicts that drive Isola are not related to the war—those are mere window dressing—but rather communication difficulties, differences in station, a tug of war between duty and emotion… the kinds of things that are far too vague for solicitation copy.

The comparison to Studio Ghibli and the work of Hayao Miyazaki is accurate though. Like Miyazaki’s films and comics, “Isola” puts an emphasis on body language and on watching the characters. This is something I don’t see much in American comics, not because American comics creators can’t do it (they most certainly can do it), but because it doesn’t lend itself to a market that revolves around the twenty-something page monthly floppy format. If you want to see this kind of storytelling in American comics, generally you have to look to graphic novels, where they have the luxury of space.

“Isola” makes it very clear what kind of series it’s going to be right from page one. The opening sequence has virtually no dialogue at all. We form our initial impressions of the characters through their body language, their actions, how they look, what they look at, how they’re framed in a panel, and how color informs the mood. 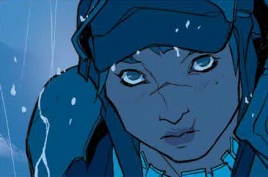 I can see why Karl Kerschl shares a story credit with Brenden Fletcher, as so much of the story is wrapped up in the visuals. I imagine entire sequences could have begun as thumbnails instead of a script. The panels in “Isola” are dense with visual information. Want to know who Captain Rook is? Look at her face. Part of her story is already written there in her scars. 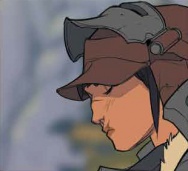 MSassyK is technically the colorist on “Isola,” but on the inside cover she shares credit for the art. I can see why too. Her job is much bigger than just the colors. Apparently, she and Kerschl work out an issue’s color script before the issue is even drawn. Color isn’t an element of the story added at the end, it’s built into the story early in visual development. She also controls what elements are in or out of focus in the panels, not something we generally see in comics, but in “Isola” it’s clearly an important part of the comic’s visual language and panel composition.

With fantasy or science fiction comics, there’s often a tendency to get carried away with the world building, but “Isola” is far more interested in the character building. Throughout issue one we’re introduced to many fantasy elements, but there’re few explanations beyond contextual cues, and really that’s all we need for now. Also, in a series with two leads, one of which is essentially mute, I’m thankful the creators didn’t fall into using “R2-D2 speak,” with the vocal character essentially repeating what the other said before replying. 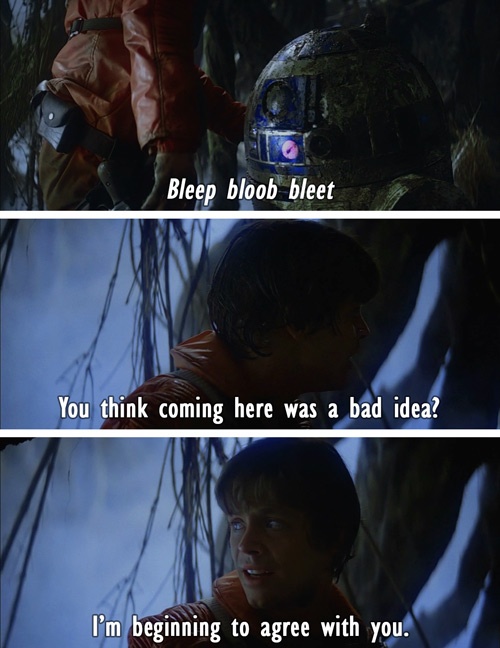 The creators don’t feel the need to be spell out every detail. Instead, they embrace ambiguity. This aesthetic affects everything, even something as simple as the lettering. Take for example the sounds heard by Rook in the opening sequence. When they first appear, it simply reads as “SSSSSSSS,” but throughout the sequence, it starts using characters that aren’t even recognizable as a part of the Latin alphabet.

As a reader we start to infer the sound quality from the quality and shape of the script, the color of the text and shape of the word balloon, and from the context of the scene. This continues throughout the rest of the issue, with the sound effects only rarely using the Latin alphabet. They function on a much more impressionistic level. Most interesting to me is when sounds morph in or out of Latin characters. When they need to be, the sounds can be very specific or exceptionally vague, and yet both function seamlessly within the style Aditya Bidikar has established.

I can see why “Isola” blurs the line between writing and illustration, between drawing and coloring. Fletcher, Kerschl, MSassyK, and Bidikar are all working to tell story through their contributions, but not in isolation from one another. All elements at work here are heavily dependant on one another. Bidikar’s sounds can operate the way they do because the panels they’re in are scripted and composed to give us enough information to make that sound come to life. It isn’t something simply added at the end. One simply doesn’t work without the other.

And every element at work in “Isola” has been designed from the ground up so that the creators can turn the dial up and down on the level on ambiguity in a scene without having to change the visual language they’ve established. It seems to be the central unifying principle behind the comic’s design.

However, there were a few moments when I could feel the comic butting heads with the format. The kind of storytelling in “Isola” demands space, something which is in short supply in a monthly comic. This is most notable in action sequences, where fast actions are stuck in small panels, which slows down the immediacy of the images. Action reads faster when the image can be processed quickly, hence action scenes usually have fewer panels per page. Shrinking panels down makes the reader linger longer to follow each moment. Since “Isola” favours the quieter moments (which are very much more my sort of thing), they have the priority on the page real estate. I’ll be interested to see how the creators navigate this limitation as the series evolves. After all, sometimes working within limitations can lead to ingenious solutions.

I commend the “Isola” team for their commitment to the storytelling approach they’ve chosen. The opening sequence so perfectly articulated the tone and feel of this world, making it clear that the world building would support the characters’ journey and not the other way around. The panel-dense pages encourage a slow reading pace, in turn fostering a focus on details. A tilt of a character’s eyeline from one panel to the next means something significant in “Isola.” So few words are said, and yet I’ve already got a strong sense of Captain Rook and how she feels about Queen Olwyn. “Isola” is an immersive and immensely rewarding read.

Final verdict: 8.5 – An elegant opening to the series. “Isola” looks gorgeous, but more importantly, those gorgeous visuals are dense with story and character.