This time in “Isola,” things get weird for Queen Olwyn and Rook goes undercover. 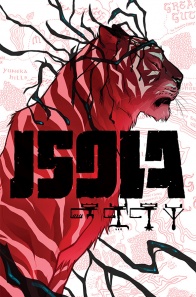 Written by Brenden Fletcher and Karl Kerschl
Illustrated by Karl Kerschl
Colored by MSASSYK
Lettered by Aditya Bidikar
Olwyn has returned from the land of the dead, but did she return alone?
The journey to Isola continues…
NOW BI-MONTHLY!

“Isola” returns to start the second arc with issue #6. This new beginning continues Rook and Queen Olwyn’s journey to Isola as well as a shift in release schedule. The series will be published on the “Doomsday Clock” schedule: bi-monthly. After reading this issue, that new release schedule colors my opinion of the issue a little bit. The bi-monthly schedule is likely necessary for the creative teams health and the overall quality of the book, but that wait and cost compared to what is delivered in something like “Head Looper” or “Clock” makes the prospect of trade waiting appear more agreeable. The craft MSASSYK and Karl Kerschl exhibit in this issue continues to make it one of the best looking comics on the market, after reading it several times, however, it still feels a little light.

To put that feeling of lightness in a bit of context, reading “Isola” #6 was reminiscent of reading an early chapter of the original “Dragon Ball” manga. Structurally the two properties aren’t that far off. Most early chapters in “Dragon Ball” dealt with Goku and Bulma’s treck in a nebulous westward direction, they would inevitably get pulled into some local dispute or make a new friend to come with them on their journey. In “Isola” #6 as Queen Olwyn recovers from her injuries, Rook discovers an encampment of the Queen’s army and goes in for a stealthy resupply and makes a new friend along the way. There is also the matter of the Queen having a beautifully realized, surreal, dream-like, sequence that takes up about half the issue – hich will be discussed in a moment. Altogether, “Isola” #6 doesn’t offer a ground shaking new insight into the characters, quest, or themes, the journey, just, continues. This isn’t poor in and of itself, it just lacks the spark that would have readers counting the days until the next one.

The plotting in “Isola” #6 leaves a bit to be desired, what more than makes up for it on a technical level, is Karl Kerschl and MSASSYK’s visual presentation. The main meat of the issue is in the first 10 pages, as Queen Olwyn has a dream-like (or nightmarish) vision of her mother. Tonally the sequence walks a fine line between thrilling horror, as her mother seems to be clawing her way out of the lake and dragging her daughter down with her, and the serene timeless quality of a dream. The sense of serenity is generated by MSASSYK’s cool and soft blue and turquoise color palette that gives the freighting proceedings a calm affect.

The sense of dreamy timelessness is established on the first page with the next entry in the poem. It is a single page spread of the lake Queen Olwyn and Rook are camping next too, as the rain gently crashes against the surface. The mood is continued on the following page with sequential panels, where the perspective continues to get closer to the subject, form this nice gentle pattern of a reveal on the third panel. Technically this deviates from Scott McCloud’s idea of timelessness through unresolved imagery, as seen on the first page. The use of rain to bridge the imagery in the lake and the land, and the use of an establishing shot of the camp, continues this timeless quality. This mood, when mixed with the subtle movements Olwyn goes through it reads like the reader, and entity in the lake, could be staring at the pair for a very long time. As Olwyn investigates showing her contrasting mirrored positions across the four panel sequence makes time-lapse effect, again muddying the sense of time.

Once the queen reaches the lakes edge, things become more surreal as she becomes entranced by the lady in the lake. That trance like quality isn’t generated through Olwyn, she only appears on the page in one of the four panels and her expression appears more like a curious tiger than someone entranced. It is created by the overall macro page design of keeping everything centered. As Olwyn stares into the lake the paneling plays in a shot reverse shot between her and the lady in the lake. The subject in these panels is centered, which makes for a seamless flow panel to panel and entrances the reader, pulling them deeper like Olwyn, as things get progressively more weird.

The lack of lettering or sound in this sequence is also central to the effective development of mood, as the sequence overall reads nearly silent. Technically there are sound effects and speech sprinkled in, they just don’t read as loud or having a tangible affect. The dialog and sound effects in this sequence reads like screaming and nothing coming out. When the phantasm of her mother speaks, letter Aditya Bidikar gives her these wispy word balloons and tiny font that make for a ghostly voice in the readers head. That delicate quality is contrasted with Olwyn’s own word balloons which are more geometric and given more standard font size and a bold effect. The not-Momo creature eventually catches one to what is going on and starts chittering, Bidikar’s lettering here helps further the extreme tension on the page. Like the silence the sequence started in, the cacophony of visual noise just disappears and Olwyn and Rook are left with nothing but to give each other a side glance wondering what just happened. As a sequence these ten pages are fantastic and maybe a bit self-indulgent.

Once Rook gets into the army camp, it allows the art team to show another aspect of their visual dexterity: plainly good character acting and comedic timing. Rook is trying her hardest to blend in, so when she is called out it is a moment of real terror. Ironically, it aids her in fitting in as Janny gives her some of his brew. Janny’s panels as he pours a cup and the reveal are a great use of repetitive imagery with just enough of a difference to elicit a chuckle. Later there is a small little moment smuggled in as Rook raids the supply tent or her drinking the brew, and it’s pretty good judging by the reaction. That reaction is a tiny little moment in the larger page that pays off a little moment and gives the issue a sense of life. “Isola” #6 manages excellent little moments.

“Isola” continues to be a visually sumptuous reading experience, that isn’t great as a single issue. It isn’t that stuff didn’t happen, but that it lacks urgency or promise beyond those already made as Rook and Olwyn’s adventure continues.

Final Verdict: 7.5 – “Isola” is technically excellent but not a great single issues.