Three issues and in No, baby in tow, has finally stumbled into sanctuary. With The Spread still snapping at his heels and a new born to take care of you’d think he’d be glad of some company, but if the wastes of the quarantine zone are purgatory, it seems like hell might well be ‘other people’ after all. 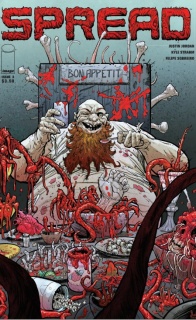 It’s chow time at Fat Jack’s Café, and you don’t want to know what’s on the menu!

The first two issues of “Spread” have been a decidedly sparse affair. Jordan and Strahm have set up a beautifully stark world, with minimalism flowing through both the writing and the artwork to create a unified, post-apocalyptic wasteland. From the inscrutable figure of No, to the blinding white-out landscapes, to the mindless surge of the Spread, everything we’ve been exposed to so far seems almost purposefully limiting, blinkering the reader in order to best translate the repetitive nature of life in the Quarantine Zone. But this level of isolation is impossible to maintain, and a character as terse as No can’t exist in a bubble. In order for the story to progress more elements need to be introduced. And that’s where issue #3 comes in.

At the opening of this issue No, Molly and Hope have just come across an outpost of humanity amid the wastes. This walled fortress serves as a bastion of humanity where survivors are able to trade supplies, rest up, gamble, drink and find what little comfort there is left in the world of the Spread. The main thing to note about this issue is that it’s definitely the least Spread-heavy of the three so far — but, thanks to Jordan’s comprehensive world-building and Strahm’s shanty-town reconstruction of civilisation, the effects of the Spread on humanity are more apparent than ever.

Strahm uses a fair bit of decompression throughout our introduction to the outpost to help audiences focus on specific pieces of the story that might come into play later on. This slightly more indulgent visual choice works well when coupled with Hope’s narration, feeding detailed information to the audience in such a way that it doesn’t seem expositional, but rather pulls us forward a step ahead of the panels, pre-empting the narrative with a wry omniscience that you’d hope for in a retrospective narrative.

As the pace of the issue picks up, however, the visual style shifts to storytelling in broader brush-strokes. The borders between panels start to blur and we’re treated to a number of larger panels that focus on characters in action, sometimes dispensing with background altogether. Jordan and Strahm’s partnership is synchronised enough that the storytelling works best when the narration and speech drops out entirely.

No, arguably “Spread’s” protagonist, could be the monosyllabic lovechild of Wolverine and Solid Snake, and his stern-eyed standoffs have definitely been the highlight of every issue so far for me. That being said, praise must be given to Jordan for the crispness of his scripting of No. What could have become an annoying action hero gimmick plays instead as the trope of a deeply skeptical and reserved character, and the few times we have seen No string a full sentence together it’s carried some serious weight. He’s clearly a man who knows when words will have as much of an impact as hatchets, and I’m interested to see how that balance progresses.

As noted in the reviews of previous issues, “Spread” is a story that wears its influences on its sleeve. Jordan is clearly a writer well-versed in modern media, and his immersion in culture seems so deep that it could have almost worked against the story. Immediately on starting the first issue I picked up on possible sources of inspiration; the Spread themselves could have been lifted straight from John Carpenter’s The Thing, the monochromatic oppressiveness of this future smacks of Cormac McCarthy’s The Road, while having a child looking back on the events as an adult is a narrative technique that Brian K. Vaughan is currently finding great success with in “Saga”. But, once you start to get into the story, it’s hard to remember the reference points you had in mind. Rather than stealing or trying to mask any possible connections, Jordan has constructed a world so tense, so enjoyable, and so honest, that it feels like a gestalt creation. He’s a student of storytelling who’s adding another very readable tale to the library, and the conviction of the narrative elevates it past the ranks of homage to a level of its own.

As Jordan notes in the comments section of the first issue – amid a concise ranking of the original Mad Max trilogy – the most interesting part of an apocalypse is the fallout ‘ten or twenty years after…when humanity starts to build new things’ — and this is great news from a narrative perspective. The fact that Jordan is looking to focus on the human element of this catastrophe means that he and Strahm are able to balance their instances of blood-soaked monsterific violence )of which there is a large amount) with the more relatable angles of the struggle, such as bartering, or finding food, shelter, and companionship.

It’s this approach that really breathes life into this Frankenstein’s monster of a story. Well-paced, engaging, and visceral, just like the antagonists that share its name, “Spread” is an unpredictable beast that is definitely more than the sum of its parts.

Final Verdict: 8.2 – A thoroughly enjoyable romp through the world after the end of the world. It’s heart and soul as much as blood and guts that makes “Spread” a must read.