You could claim that James Bond is a franchise that doesn’t need to exist in 2019. It’d be hard to argue with that- does any franchise need to exist? But Bond is an especially outdated relic of the 1960s that seems obsessed with its own legacy. That’s what makes the alchemy of the new series so surprising. There’s enough new in with the old to give the “James Bond” comic series a new lease on life. 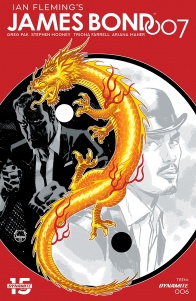 The modern Bond epic continues by superstars GREG PAK (Planet Hulk, Firefly) and STEPHEN MOONEY (Grayson, The Dead Hand). Secrets are revealed, allegiances confirmed. Bond and Oddjob learn the awful truth of the terrorist organization ORU, and how they’re helpless to prevent the destruction of global infrastructure as we know it…

It’s a happy coincidence that I’m reviewing a Greg Pak comic this week. The day after I decided to review this issue, Pak was announced as the writer on another big franchise- “Star Wars!” It is instructive to look at how he approaches adapting an iconic story. It turns out, his secret is infusing it with as much of himself as he can. “Jame Bond” sets the famous agent against his Korean equivalent, and the mission sizzles with action and vaguely homoerotic tension.

It’s a great take. It’s great in that it feels like there’s a take at all. Really there’s a MacGuffin, a few different factions in play, some witty banter, some gadgets. But Bond is the kind of character you can just insert into any sort of story and have him play off of it. You can stick him in a voodoo infused exploitation flick (Live and Let Die), or a pulpy ninja revenge piece (You Only Live Twice), or a remake of Home Alone (Skyfall). This issue has an Australian prison, multiple shootouts, and flirting with Miss Moneypenny.

The trick is that you need to draw from the bag of tricks of accepted Bond maneuvers. So when Bond has a moment of rage that Moneypenny notices, he just smiles and says, “Delighted.” When 007 changes the objectives of the mission on the fly, Moneypenny tells him, “James, it’s not your job to decide what would be interesting.” And when Bond leans his head around the corner, he of course has to pull his head back to let the bad guys fire a dozen shots into the door before leaning back in and taking them all out effortlessly. That’s all classic Bond.

A lot of that is only successful because of artist Stephen Mooney. It’s hard to make gunfighting look interesting when it’s the third gunfight in the issue, and the millionth one the reader has ever seen. Mooney poses his figures like every moment could be the cover of a book (or a DVD case). They pose unrealistically, but the flow of the action is easy to track. Mooney also does a great job drawing the diverse cast. You know comic artists who only have a face or two in their repertoire? Not so with Mooney. His Bond looks a bit like Connery, but also a lot like Ian Flemming’s original description of 007 (down to the scar on his cheek). The diverse cast looks diverse, without exaggerated features. The slick roguish Korean agent has messy hair and a rockin’ ‘stache. Moneypenny is young and black, but looks nothing like Naomie Harris; she just looks like Moneypenny.

The whole team also frames the layouts simply, which makes the more fast-paced moments easier to follow. Pages default to a six panel grid, with long narrow panels cutting through when the action beats start coming in fast. Colorist Triona Farrell gives everything a washed out pulpy look that sort of resembles the colors you’d see in a Sean Phillips comic. The splashy backgrounds though are completely Farrell. Red spirals highlight violence like in the intro song from a Bond movie.

The whole thing, from the writing, to the layouts, the the color choices, have a lovely feeling of specificity. That’s what has been missing from Bond. When he’s fighting generic terrorists with a forgettable plan, he’s not that interesting. But place him in a scheme that ranges from secret mind control experiments to artifact smuggling, and involve the dynamics of the Australian and Korean intelligence services, and you’ve got an excellent mess going on. By the time the issue chooses to indulge itself in a bit of nostalgia towards the end, it feels more than earned.

That’s the secret to Greg Pak’s success. He knows what we want, but before he gives it to us he does what he wants. Not in a voyeuristic way. He makes a case for his interests, showing why they are cool, why he loves the things he loves. By the time he starts dipping into old favorites, you’ve been changed. You get him, and what he wants. That’s what makes this issue of “Bond” successful and that’s why his “Star Wars” is going to be amazing. One hopes that he always has such a strong art team to help carry out his vision.

Final Verdict: 8.2 – Greg Pak gives you exactly what you want, but not before he convinces you to want something completely different. If that sounds esoteric, well, read the issue and get back to me.