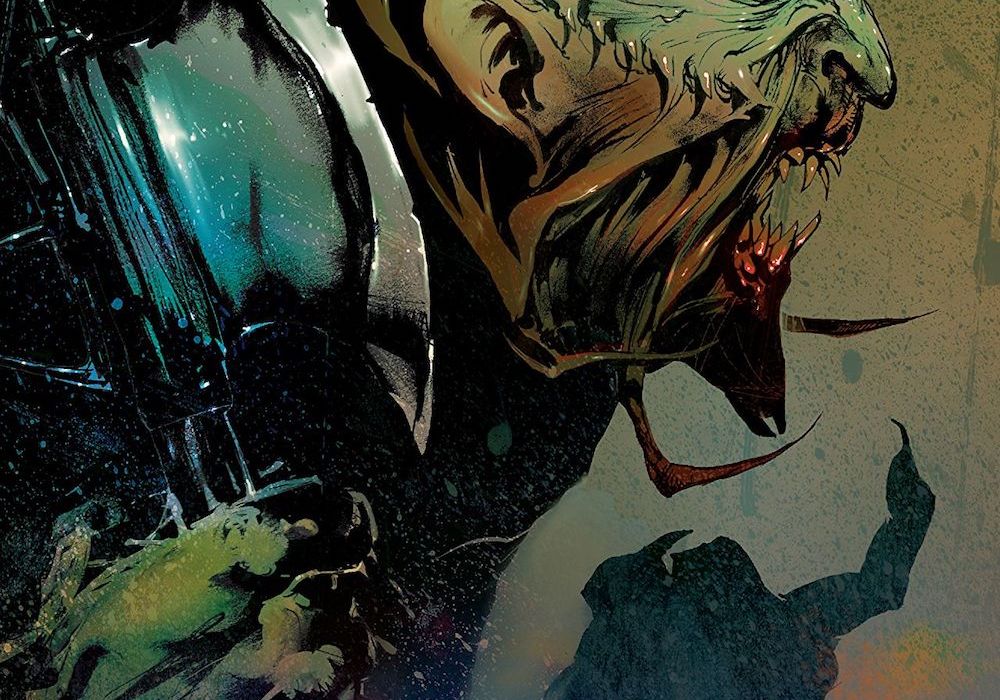 “Jeepers Creepers” provides some scares and creepy moments, but the art is what really helps it along. 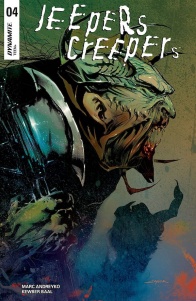 The Secret History of the Creeper continues! Over the centuries, the immortal monster has left a path of misery, despair, and death and as our intrepid researcher Devon uncovers more and more, the Creeper gets angrier and angrier.

After the conclusion to the third film in the Jeepers Creepers series, Marc Andreyko has had the task of following up on a particular part of the story in his own way: the origin of the eponymous Creeper. Does he do a good job in the penultimate issue of the “Jeepers Creepers” miniseries? Let’s check.

The story presented by Andreyko is relatively simple, albeit split into two parts. In 1962, an intervention by the Creeper causes a serious accident in a mining town called Centralia. In the present day, the Creeper chases a young man across the same town. Andreyko cuts between the two arcs seemingly at random, jumping from one horror situation to another. Are the jump cuts meant to indicate the Creeper’s own thought process as he/it recalls its past? Are they meant to indicate something of the victim in the present era? Perhaps there is more to the events of the series, but the focus on action over revelations does not work well for the story itself.

As the human residents of Centralia are presented, Andreyko relies upon a tired “people running scared in all instances” mentality that, while perhaps appropriate, does not lead to much in the way of interesting plot developments. Any revelations about the history of the Creeper are pretty much overlooked in favor of a focus on fear and death.

That said, while Andreyko provides a story with very little nuance for “Jeepers Creepers” #4, some of the scenes do work well to demonstrate why people would be so scared of the eponymous monster. By keeping from using dialogue for the creature, unlike previous issues of the series, and more like the source material, Andreyko is able to keep an idea of an inhuman intelligence that is beyond a common animal, but also a level of savagery that keeps to a feral nature.

Under Andreyko’s pen, Devon, our modern human target, is essentially just a typical horror victim: someone who has some knowledge, but not enough to do much to help his situation or avoid the Creeper. He seems somewhat competent, but when faced with a monster like the one chasing him through Centralia, there is only so much that a typical liberal arts student can do.

Unfortunately, Andreyko’s writing requires readers to have an understanding of the previous issues of the miniseries to grasp why any of the events are actually happening, and even then the connections are enough to mostly show issues with the tone used for this penultimate chapter.

Kewber Baal helps to elevate the writing somewhat through interesting illustration. A truly scary horror comic takes a certain kind of use of perspective in most cases, and “Jeepers Creepers” is no exception. By utilizing “camera” angles that tend to keep the Creeper out of sight until the moment of violence, Baal emphasizes the terror he invokes. No better is this seen than in the flashback to his 1962 emergence, where most of the violence occurs through a wing or an arm tearing across from just off screen, the focus instead being on the dying men in his wake. The monster is only seen in full once flames surround him, adding to the demonic presence he seems to be on some level. Even his victims are seen before he is, as if a scene straight out of a horror movie in and of itself, albeit one that is pretty common.

Baal also makes the best of the story for the present day. While the Creeper perhaps has too much of an overt presence to be truly menacing in the same way as in the flashback, Baal’s use of ample amounts of darkness, be it through tunnels, a shadow cast by a flare, or other sources allows some sense of foreboding. Similarly, more clever usage of perspectives make discerning the location of the Creeper sometimes difficult, in accordance with Devon’s relative disorientation.

Jorge Sutil’s colors further add to the already intriguing artwork. The usage of a green army man and a gray “monster” toy in the start, with a blood red background over the sandbox, gives a feel for the essential conflicts at work: a human trying to fight a monster across figurative oceans of blood across time. In contrast, the present day attacks utilize more blues and browns on both participants in the scuffle, showing a maturity that comes with a darkened perspective on life, perhaps in reaction to the horrors Devon has already witnessed through his connection to the Creeper.

The uses of blood are disturbing, but not due to any overuse. Instead, the more tactically placed reds on specific wounds creates a realism that is far more unnerving than random bloody puddles would have afforded.

As far as horror comics go, “Jeepers Creepers” doesn’t have a lot going for it in its penultimate issue, though the artwork and coloring do help to keep the somewhat unimpressive narrative above par.

Final Verdict: 6.5– The penultimate issue of “Jeepers Creepers” may provide a lot of information for dedicated readers, but a lack of much context for why certain things are important understandably makes new readership very difficult as it leads into its conclusion.