IDW adds to its roster of 80’s properties with a reworked version of a classic TV show, revamped for the 21st century. 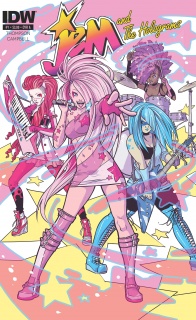 It’s the 21st century, and Jem and The Holograms are 21st century girls! Meet Jerrica Benton, the gifted singer of The Holograms, a band that has the right look and the right sound… But one thing is holding them back—Jerrica’s crippling stage fright. Luckily, Jerrica is about to find help in the most unlikely of places when she discovers a forgotten present left by her father. And what she finds is truly outrageous!

IDW are the foremost publisher for comic-books based on existing franchises and, often quite unlikely, properties. They regularly put out issues of “GI Joe,” “Star Trek,” “Transformers,” “Teenage Mutant Ninja Turtles,” and many more, but the latest horse in their stable is a decidedly different breed. Jem and the Holograms was a(n incredibly) 80’s television series that chronicled the exploits of Jerrica Benton and her sisters/bandmates as they battled rival groups, villainous managers, and complicated social situations in their quest for stardom. And after years of campaigning for a revival of the series, and with a potential film adaptation in the works, 2015 is going to see Jem and the girls make their comic-book debut.

On the surface of things, Jem and her dazzling cohorts seem a far cry from the boys-toys remakes that IDW has become famous for championing. They’re pastel coloured, diamante covered, and their main antagonists aren’t earth-shattering demi-gods but instead rival girl bands. But, if you look a little closer, Thompson’s first issue bears all the hallmarks of the classic #1’s that spawned many of the nation’s favourite superheroes.

Jerrica, our plucky protagonist, is a teenager with bags of potential but a lack of confidence that could end up scuppering her chances of stardom if she doesn’t get it in check. After she ruins an opportunity that threatens, not only her future, but those of her BFFs, she heads home dejected. But, when she arrives, she discovers a life changing item waiting for her (not a radioactive spider or a super-serum, but a pair of high-tech holographic earrings) that could be just the boost she needs to overcome her fears and seize her destiny.

While this opening issue does follow a reasonably tried and tested formula there is a levity and youthfulness in Thompson’s writing that helps to both freshen the story and ground it in the present day with relatable slang and dialogue. The four members of the band, Jerrica, Aja, Shana, and Kimber. each have distinctive voices and Thompson manages to present their personalities, in relatively broad brushstrokes, through a series of natural feeling encounters. Like fellow IDW alums the Teenage Mutant Ninja Turtles, The Holograms quickly feel as though they each bring something different and instantly recognisable to the table: personality traits that will be enhanced and examined in greater detail as the series progresses.

A major worry for any franchise that’s simultaneously transitioning from one format to another and rebooting is the problem of continuity. How much do you stick with the original history and where do you deviate? Thompson manages to maintain The Hologram’s neon-soaked roots while updating and streamlining their origin story. Although the opening few pages might feel a little expositional, with numerous references to certain elements of the Holograms’ mythos that should stir echoes in the minds of original fans, Thompson manages to keep the tone of this issue light and conversational pretty much across the board, all the while dealing with some pretty ridiculous concepts.

But, I must admit, the part of this reboot that really collared me from day one was Campbell’s initial concept art for the series. Her work on Joe Keatinge’s run of ‘Glory’ was iconic and she portrayed the eponymous Gloriana with such a fine balance between monolithic and feminine that I couldn’t wait to see how she handled Jem. And she really brought her A-game to this issue. The four members of the band are instantly recognisable not only through their vibrant primary colours and fantastic hairstyles but also through more subtle differences, like their body shapes and poses. Campbell’s highly expressive faces form the backbone of this issue, transforming what could’ve been, at times, a series of talking heads into an intimate, and often, revealing experience that feels reminiscent of the medium the Holograms have flipped from.

One of the most memorable things about the TV versions of Jem and the Holograms was the songs themselves, one of the few things that can’t really be replicated in comic book medium. The catchy disco/synthpop tracks  of the TV series were perfect for their 80’s setting but, flash forward to 2015 and its clear the girls have been given an overhaul. While Campbell’s designs and Robado’s colour have retained the masses of colour and charisma that their original counterparts exuded, The Holograms now feel like they draw their inspiration from a wider variety of sources, including glam rock, and more asian influenced pop. The inevitable juxtaposition of our girls against the spikier, more punk-infused ‘Misfits’ is something I can’t wait to see.

Campbell’s glossy, dynamic art is definitely my personal highlight as far as this issue goes. While Thompson was probably working within relatively strict guidelines as far as narrative is concerned, Campbell ensures that every step of the Hologram’s journey to stardom is a joy to look at. What’s more, there are few artists working at the moment who I feel could’ve better captured the feeling of a pop super-star as Campbell does when we get our first look at Jem. Radiating coolness, confidence, and massive hair, Jem is every awkward teenager’s escapist dream. What’s more, with 2014 being the year that Beyonce, Taylor Swift, Nicki Minaj, and many other women in pop finally started getting mainstream media recognition for their work both as pop-stars and feminists, it seems appropriate that Jem and the Holograms offer the comic book world their own version of a superstar. An interesting, confident female icon who proves that you don’t have to be able to tear tanks in half to be considered a strong woman, you just have to be able to overcome your insecurities and chase your dreams.

Final Verdict: 6.9 – While not a comic for every reader, this is a strong debut of a property with heart, soul, and a lot of possibility. One to watch for sure.