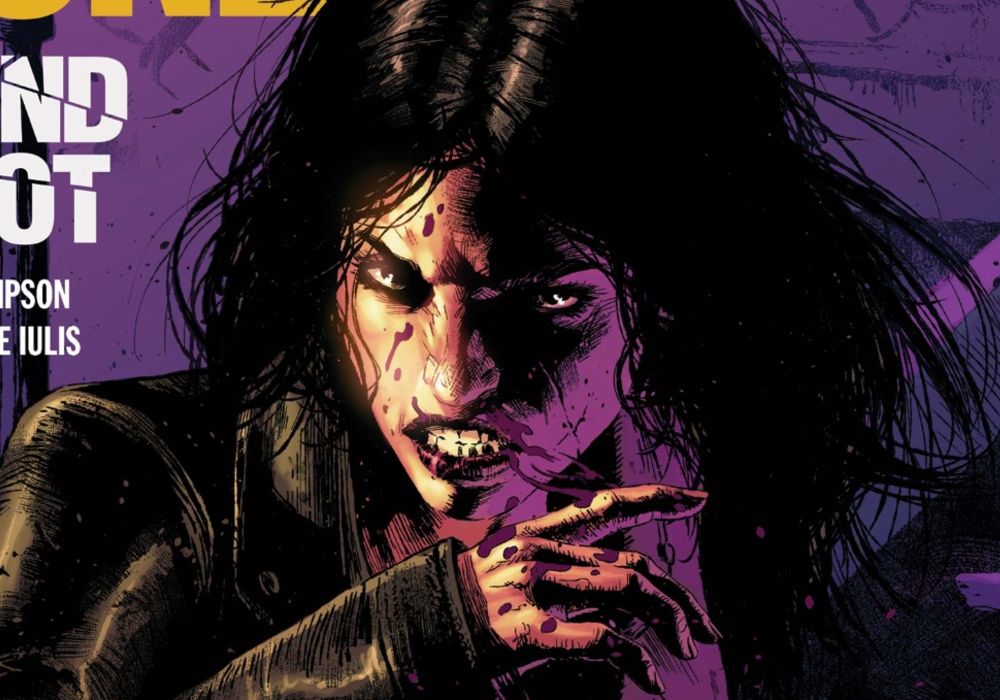 In a superhero universe built on having its characters be relatable heroes, Jessica Jones is one of the most relatable of all. She tried being a hero, it didn’t work out, and now she does everything she can to stay away from the life while still trying to help people as a seemingly normal private investigator.

Surprisingly, every time she tries to get out, the caped life drags her back in. 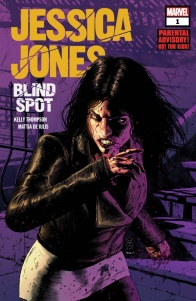 The critically acclaimed Marvel Digital Original series by Kelly Thompson and Mattia De Iulis, released for the first time as a print miniseries!

Jessica Jones was once the costumed super hero known as Jewel. She sucked at it. Now she’s a private investigator at her own firm, Alias Investigations. She sucks less at that. With the Purple Man gone, her relationship with her husband, Luke Cage, and their daughter, Danielle, is better than ever. But her past always comes knocking, and when a woman whose case she fumbled winds up dead on her office floor, Jessica goes from private investigator to prime suspect. Can she find the real killer and clear her name?

There’s a mystery in “Jessica Jones: Blind Spot” #1 and somehow it involves one of Jessica’s cases and someone, or something, that seems to have a fascination with superheroes and powers. Whatever the mystery perpetrator is planning it involves a carefully laid plan that involves having an old client of Jessica’s murdered in her office and having her framed for the crime.

How does Jessica react to it all? With a surprising amount of apathy and exasperation. Jessica isn’t a person who wants to run around being a costumed superhero, she wants to live a relatively normal life with her family. It’s just unfortunate that the one thing she’s good at is helping people and all of this punching and heroic stuff is more of an annoyance than anything else.

If there’s one thing that writer Kelly Thompson nails in “Jessica Jones: Blind Spot” #1 it’s the dialogue and little ordinary moments that allow the characters to shine. The story opens with Luke, Jessica, and their daughter just walking through the park with no action or drama and the highest stakes at play is Luke trying to coach a group of little kids the fundamentals of basketball. It should be the most boring thing ever and not work as an opening, but the dialogue and chemistry between the two is so pleasant and relatable that it can’t help become engaging.

When the plot gets started and it’s time to ramp up the action this desire for a normal life continues to be a very engaging and interesting theme in the book, as demonstrated by Jessica’s annoyance at the police officers who are attempting to get a rise out of her through some questionably legal interrogation tactics, but thankfully super star lawyer Matt Murdoch is there to pull Jessica out of the fire and save the cops from a super powered temper tantrum. It’s all very well done, with the slight exception of a single moment where it feels like the letterer got the panels mixed up and the dialogue feels out of place. It’s not a deal breaker for the whole issue, it just breaks the reader’s immersion for a bit.

The tricky thing about the artwork for a book like “Jessica Jones: Blind Spot” #1 is how to make the art engaging to keep the reader’s interest and interesting enough so that the artist doesn’t lose their mind on the book. This is a story that heavily focuses on dialogue and, with the exception of the very beginning of the comic and the cliffhanger at the end, is mostly made up of a handful of people existing in a pretty mundane location, and talking to each other. Artist Mattia De Iulis does a good job at creating engaging artwork by doing three things. First, each page has a high panel count which allow the art to focus on close ups of the characters faces and create plenty of opportunities for interesting shot angles and compositions. Second, the book has a nice little “detective vision” mechanic that literally frames a certain part of a character’s appearance or demeanor that has caught Jessica’s attention and third, the book does a lot to play around with the lighting of each scene from the warm colors of a park at midday to the harsh fluorescent lighting of a police interrogation room. It all comes together in a solid piece of artwork that allows the story to claim its place as a comic book rather than a prose novel.

Funnily enough, if the artwork has any issues worth mentioning it’s because of the requirements of the script. The book has a soft digital feel to it that allows for a lot of great close up detailing of things like clothing and facial expressions. However, when it comes time to pull back and show a little bit more in the frame, some of the details get blurry or straight up vanish. There are panels where people standing in the background don’t have mouths and the parts of the book that take place in the evening and nighttime have a harsh, artificial lighting that make the characters look a little bit off. It’s not something that wrecks the reading experience, but it is a tiny little annoyance that will catch your attention and possibly stay with you if you decide to keep reading.

“Jessica Jones: Blind Spot” #1 is a superhero story that is uniquely human. Here is a heroine that wants to help people despite not wanting anything to do with the caped crusader life, and it’s coming back to ruin her perfectly normal life in the most annoying and relatable of ways. Oh, and there’s a mysterious figure supposedly from Jessica’s past that is back to haunt her, but that’s for the next issue.

Final Verdict: 8.3- While the book does set up an interesting noir style mystery for our superpowered detective, the real highlight of the book are the little moments that make her life relatable and ordinary.