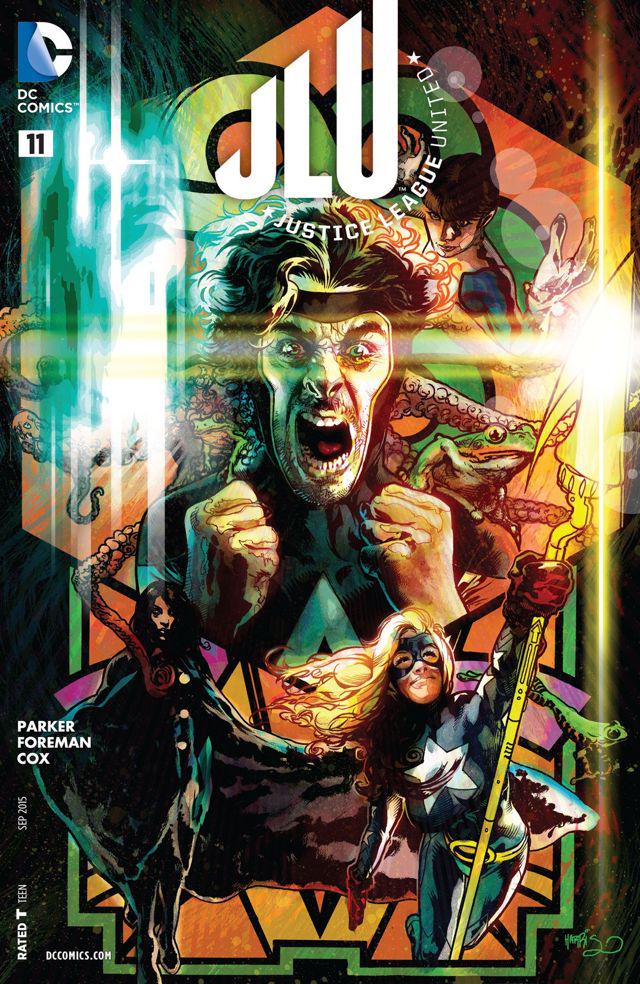 A new creative team brings the JLU together again as a new group of misfit heroes fight an inter-dimensional threat. 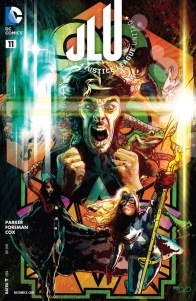 “The Convergence is over! Now, Alanna Strange, Stargirl and Equinox must assemble brand-new and wildly untraditional teams of heroes and villains to work together and stop another cosmic catastrophe before it happens. In this issue: Mera, Poison Ivy, Swamp Thing and Etrigan!”

Fresh off another company-wide crossover, the Justice League B-squad has found themselves torn about, with some members returning to their own adventures, while Adam Strange has been ripped into another dimension. It’s up to Allan Strange, Animal, Equinox and Stargirl to recruit a new group of miscellaneous heroes and occasional antagonists to combat a new threat.

It’s clear from the get go that the roster of the “Justice League United” team will be much more flexible than that of the regular League. The idea that this could be more of a showcase book instead of Justice League Lite is exciting, and the first issue pulls different characters from across the DCU. Mera, Poison Ivy, Etrigan and a very reluctant Swamp Thing are called together to fight against the Breakers, strange extra-dimensional entities that are bursting through realities.

Fortunately, writer Jeff Parker wisely skips any fisticuffs between the new teammates, which have become a troupe of team books. Not everyone is happy to be there, of course, but Swamp Thing’s pessimism about the scenario and how his Green-based powers can help is completely in-line with his penchant for being a loner. Parker only gets to spend a few short moments with each character, and he manages to make them each feel different enough and speak with their own deep voices. Long-time fans of Mera and Swamp Thing might be a little disappointed that nothing particularly new is explored with their characters, but that is more to do with the format of the series.

Justice League United also signified Jeff Lemire’s rise as one of the top creative talents working in comics today. His fingerprints were all over the book, from the inclusion of Animal Man and Green Arrow, to his creation of the new superhero Equinox. The series was clearly a Lemire vehicle, and it left some big shoes for Jeff Parker to fill. Fortunately, Parker is a very talented writer who has a similar knack for misfits and outcasts. This is still a team of weirdoes, people who really shouldn’t be in a room together, let alone band together to fight evil. Parker manages to maintain the feel of JLU, without simply copying Lemire’s style and idiosyncrasies. He is careful to stay true to the characters, Animal Man is still cracking jokes and Equinox is still excited for example, but is still confident to take the series in his own direction.

Travel Foreman got his start in the New 52 (not that we’re still calling it that) with the Lemire-penned “Animal Man”, and he has clearly not lost his knack for macabre and grotesque art. The Breakers resemble what can only be described as giant chunks of meat, which make up the whole of an even larger meat structure. Even just typing that feels gross, but with Foreman’s art you just imagine the sound that they make when they hit the ground. There’s a panel that features what can only be described as a bursting, which feels particularly nauseating. Suffice to say that the art makes the readers feel as unsettled as the JLU must at that moment.

The art featured in the scenes of the JLU’s newest members being recruited does a good job of setting up their unique characteristics and gives us a glimpse of their skills and powers. There’s even a fun moment where Batgirl shows up, and Foreman is able to handle the disparate locals and setting with relative ease.

Being a team book, there are of course plenty of moments for big hero group fighting action. Foreman gives each character the quick chance to show off their powers and/or turn into demons. There are couple panels that are extremely heavy on the blur, which distorts some of the characters proportions to ridicules levels. The level of detail also drops considerably at these moments, which ends up feeling more than a little rush. It’s a shame because these are brief glimpses in a book filled with good art, and hopefully it can be chalked up minor growing pains.

Aside from the odd panel here and there, “Justice League United #11” is a decent book with a lot of potential. Parker continues the fun tone of the series, while juggling the old and new members very well. Foreman bounces around various location and characters fairly well, with only a couple rushed moments in one of the more crowded scenes.

Final Verdict: 7.0 – The latest storyline is off is a good, although not outstanding start, but there is every indication that “Justice League United” will remain a safe place for some of the more unique misfit heroes of the DCU.