The Rat Catcher, the debut story arc of Joe Golem, comes to a close in an issue that showcases Patric Reynolds’s beautifully. 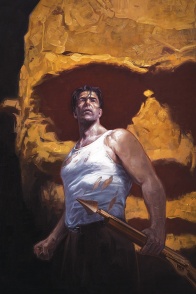 Beneath the surface in the creature’s underwater lair, Joe Golem searches for the Drowning City’s missing children and finds more questions than answers.

My first experience with Joe Golem was the original prose novel, and there are certain things in there that feel essential to that world. One of those is a sense of sadness and loss. So for me, the comic didn’t feel quite right. It had little sparks of this, especially in the first issue’s opening with Simon Church, but in general the tone was different in a way that didn’t quite feel right. So for me, this was the issue that the comic really came to life. It brought that sense of sadness and loss to the fore.

But the thing is, I’m being completely unfair. The comic shouldn’t be judged against the novel. They are two completely different animals. Going forward, I’m going to try not to invite the comparison. The comic deserves better from its reviews. A new comic series is taking shape; the novel is a distraction.

What I love about this issue is that much of it is set in the part of the Drowning City I find most intriguing, in the flooded ruins of lower Manhattan. It’s an environment that immediately creates a haunted atmosphere, and it very much plays to Patric Reynolds’s strengths. The writing on the walls, the shredded pictures, the broken statues. This stuff was great.

Also, with Joe being underwater, there’s no dialogue in these sections, so the environment tells the story. It invites the reader to linger, and rewards the reader for doing so. Simply put, this sequence is the highlight not just of this issue, but of the entire arc.

This issue is clearly laying the groundwork for the future too. I can imagine the kids in this story becoming something like the Baker Street Irregulars for Joe. I hope so. That’d be fun. And obviously Lori is being set up as a love interest, although I think this is the weakest part of the story. It plays out exactly the way you’d expect, and I don’t really feel any spark between Joe and Lori. All I get is a sense of gratitude from Lori, so when she prompts Joe to take her out on a date it feels obligatory rather than genuine. I did like that Joe admitted his mistakes from the first issue though, and that he had been wrong. I’ll wait and see how this plays out, but for now I’m cold on their relationship.

And then there’s Joe’s dreams. I feel like there was a little too much emphasis on the golem aspect of the story. It’s an element of the story that is puzzling to Joe, but I feel like it was given to the reader rather easily and in a very straightforward manner. I would have liked a little more play in it, more of a puzzle, more ambiguity. Obviously we know Joe is the golem—I mean it’s in the title of the book—but everything else around that central concept could have been less clear. As readers, we experience these flashback sequences as outsiders being entertained. They function as bombastic action sequences. I wanted to experience them in a way that shed light on Joe’s thoughts and feelings more. Not that that stuff isn’t there, because it is. There’s one particular panel in this issue with Joe’s reflection in the lake that spoke more about Joe’s experience. I just wanted more of that stuff.

I liked the way the golem dreams affected Joe. They were always in his head, never quite fully dismissed. Of course, they’re all forgotten by the end of this arc, so I’m very curious to see how this stuff is handled in future without getting repetitive. No doubt the writers have some tricks up their sleeves ahead for us.

Now, let’s discuss the Rat Catcher, a mutilated child forever separated from its own kind, and the way the flooded building becomes a way to take this character’s thoughts and feelings and expose them. We don’t learn very much from the Rat Catcher itself. It only plays the role of the attacking monster whenever it’s on the page. However, the environment becomes a way to see the monster differently. It’s like the way you see a new side of a person when you see their home for the first time. The Rat Catcher’s home is full of pain, and it’s written on the walls.

I mean, the statue of the mother that has her baby snatched from her arms says so much. Then there’s the statue of that baby lying on the floor, its mouth open in a silent cry, arms open for a hug, but all alone, with only the corpses of its attempts at siblings for comfort. Holy crap. That stuff is powerful. And all without dialogue. This sequence was horrifying, but also beautiful in the way it showed the fragile soul at the center of it all.

The Rat Catcher’s attempt to create gills is particularly nasty. I really feel for the creature here, and I like that you can see in Joe’s eyes that this stuff is affecting him. He empathizes with it and feels angry on the creature’s behalf.

Of course, the other part of this sequence was when Joe has to fight to survive and the golem awakens. The man is no longer behind those eyes, and the golem is driving. Joe could dismiss this stuff when it was only visions, but after this, he’s more than happy to take Simon Church’s herbal tea and forget.

So at the end of this arc Golden, Mignola, and Reynolds have two ongoing plotlines already set-up. There’s the mystery of who created the Rat Catcher, which I certainly look forward to learning more about. I wonder what other creatures have been created too. And then there’s the tension between Joe and Mr Church. I assume this will be a slow-burn throughout the series, but I like the potential here to better explore both characters. Mr Church was introduced in this story and not much else, but he’s a character with a long history, and there’s so much more to him than we saw in this first arc. I hope he’ll play a bigger role in the next arc, The Sunken Dead, when it begins next month.

This issue gave me a strong sense of what this series can be and the sort of stories it can tell. Obviously that’s very important in a debut arc. I hope the next arc puts more emphasis on the present. The flashbacks, while visually interesting, have limited pay-off and tend to be a bit one note. When Joe Golem is at its best is when the story dives into tragic, haunted stuff. That’s where it really shines. The imagery used to to explore a certain character’s interior life was perfect and I have to praise all involved for pulling it off so well. That sequence was masterful.