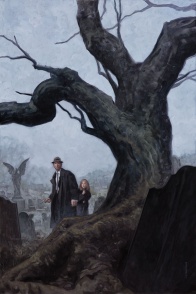 Occult detective Joe Golem and an unlikely sidekick venture to a ruined cemetery in search of a missing conjurer, but he can’t ignore the bigger mystery about his own shadowy past and the one who is really keeping secrets from him.

Mark Tweedale: This may sound odd, but it was something that jumped out at me immediately while reading this issue… I really appreciate the swearing. Sometimes the Mignola books censor swearing and it’s usually awkward (especially back when Fenix Espejo was first introduced in “B.P.R.D.: Hell on Earth”). I’m of the opinion that you either do it or don’t; aiming for the middle ground is almost always a mistake. And in the case of ‘The Drowning City,’ I appreciated the way swearing was used to express character, in particular Molly McHugh.

Molly’s my favorite character in the “Joe Golem” series, but I appreciate she’s someone not everyone’s going to warm to. However, the rough edges that may put some people off are precisely the qualities I find endearing and I’m glad the creative team didn’t try to restrain that aspect of her character for the comics adaptation. Christopher Golden writes knowing that his audience is of a certain level of maturity and doesn’t pretend otherwise. If readers can handle an unholy and horrifying birth sequence, they can handle a fourteen-year-old swearing.

Christopher Lewis: I didn’t notice the swearing. Not because I glossed over it, but because I felt it was very much in line with Molly’s character. She’s a kid, and at the same time is a strong, straight shooter who has no tolerance for bullshit. These things and the fact Molly has had a hard life makes her use of crude language genuine.

And I gotta say… I love Molly. The more I learn about her the more I love her. She is very perceptive and vocal, which is making her interactions with Church fun to observe.

Mark: She’s a good contrast to Church too.

Chris: For a long time I’ve disliked Church for his manipulation of Joe by using his tea. Throughout the first ten issues of the series my dislike of Church was amplified by Patric Reynolds’s nefarious depiction of Church during the tea scenes. Here, Peter Bergting isn’t making Church look as bad as Reynolds did. One could think the variation in presentation is due to different artists being used, however I am sure there is intent to Bergting’s portrayal as it gave the tea scene a feel of being old hat instead of manipulation. Church and Joe have done this so many times that there doesn’t appear to be a moral dilemma anymore in Church. This has become become routine, so Bergting’s straightforward depiction works perfectly here.

Mark: I’m just going to drop a spoiler warning here. I’m only going to be discussing light spoilers for now, but as we get along, we’ll get to the heavy spoilers.

I feel like Bergting brings an appropriate weariness to the Church and Joe’s interactions. Even if Church does believe he’s wiping Joe’s memory for the best, he’s been doing it for twenty years now, and I’m guessing the last ten of those were especially tough in the wake of Lori leaving. It’s never stated, but in the weariness I sense regret in Church. I suspect that’s why he’s so open to Molly about what he’s done to Joe.

There’s a thing Bergting did with the art, where he had Church telling the same old lies to Joe, and while he did so, a nearby window frame is casting shadows on his face. It conjures up the idea of a cage, one of Church’s own making. He’s twenty years into this lie and he’s feeling it. 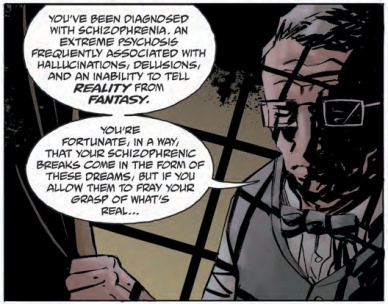 Chris: I didn’t pick up on that, but now that you point it out that is a pretty amazing panel.

Mark: I also felt like Lori’s ghost hung over a lot of this issue too, which is an interesting way to augment the story from its prose version to the comics version, since Lori didn’t exist in the original novel. It doesn’t feel like a retcon though, but rather deepens ideas that were already there.

Chris: Interesting. As I have only read the comics, Lori was the first thing I thought of when Joe started spouting off about returning memories and remembering through dreaming. I wondered how many times Joe had remembered Lori in some way and then ‘forgot.’ On the other side, if Joe is remembering things then I assume Lori is also remembering/dreaming of Joe. That by itself makes me very sad for both of them.

Mark: I remember I used to be frustrated with Dave Stewart always putting Lori in pink until I realised what he was doing—preemptively coloring her the same way he was coloring the Golem flashbacks. And it’s nice to see Michelle Madsen pick up on that color language and use it to powerful effect here. Look at the punch she can muster in a single panel just because of the colors being used.

Chris: Yeah, that was a powerful scene and again made me sad for Joe and Lori. Looking at them with arms around each other shows their very intimate relationship and tells a lot about their love for each other.

Mark: That single panel could bring such melancholy because of the groundwork laid down in previous arcs, and even though the art team has changed from Patric Reynolds and Dave Stewart to Peter Bergting and Michelle Madsen, there’s still that continuity of visual language in color and composition. If Bergting and Madsen had tried to reinvent the series, a panel like this be solely relying on the writing for its power.

OK, we’ve got to talk about the second half of ‘The Drowning City’ #3, which is the lead in to my favorite part from the novel—the twisted tree in the graveyard.

Chris: Knowing that is your favorite part gets me more excited to read the next issue. I was already excited due to the tremendous art of the graveyard scene. Specifically Michelle Madsen’s colors blew me away. Her use of mixed greens and white highlights, which blended up into the tree trunks and around our characters, gave a fantastic feel of a foggy graveyard overrun by vegetation. With the colors and the rain, I truly felt that Joe and Molly were walking around a swamp.

Mark: Oh, yeah, for sure. She did a beautiful job with it. That gray haze of drizzling rain creates a lot of depth in the image. There’s a lot of atmosphere in that sequence, and I feel like it’s the kind of sequence that leans toward Peter Bergting’s strengths. He makes the graveyard feel like part of an older world than the rest of the Drowning City.

Chris: ‘The Drowning City’ was a powerful issue hitting many emotional highs with Joe’s memories and Church being forthcoming with Molly about Joe’s history. Additionally, Madsen’s colors continue to impress giving depth to the story. I am going to give this one an 8.5.

Mark: 8. Switching art teams on a series always presents a challenge, but Bergting and Madsen handle it with grace. And I love that in adapting the original prose novel to comics, Molly wasn’t watered down. She brings such a different energy to the comic too. She shakes things up with Joe and especially Mr. Church.

I can’t believe I forgot to mention this, but Dave Palumbo’s cover for ‘The Drowning City’ #3 is my favorite he’s done for “Joe Golem” to date. It certainly leans towards Mignola’s sensibilities, and I love the way the tree frames Joe and Molly. I’m giving this issue an 8.

Final verdict: 8.25 – “Joe Golem: Occult Detective—The Drowning City” #3 strikes an excellent balance between dialogue and art telling the story. Christopher Golden has a history with this art team and it shows.