“Joe Golem: Occult Detective—The Drowning City” #4 finally catches up to Mark’s favourite sequence from the original novel Joe Golem and the Drowning City. Be warned, this review is going into spoiler territory. 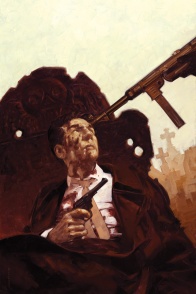 The occult detective and his unlikely accomplice follow a hunch to a sunken cemetery in search of information about a missing medium, but unknowingly lead their enemies to the same place.

Before this arc, “Joe Golem” has dealt with very contained stories, nothing bigger than three issues. With ‘The Drowning City’ the series has leapt from two- or three-issue arcs to a massive ten-issue arc, and in order for that to work, the stakes have to get bigger too.

‘The Drowning City’ #4 is the point this series crosses a threshold into steps onto a much larger canvas, and I’ve been very excited to see how this would play out in comic form. And I’m happy to report, it played out to my satisfaction.

For comics-only readers, I imagine they’re seeing a substantial shift in Mr. Church in this arc. After all, he’s been a somewhat cold and even distant character in previous arcs. In this issue, he’s a character almost completely defined by his concern for Joe. He’ll even push himself to life-threatening extremes just to try and help him. As a novel reader, this is the aspect of Mr. Church I was first introduced to, and it became the core through which I interpreted the character. There wasn’t any doubt about Mr. Church’s concern for Joe in the novel, so reading the comics has been an interesting deconstruction of him. Extrapolating backwards to what he must’ve done for so many years, and what kind of person he would have had to be, has often been one of the most fascinating parts of the comics… but something I’ve never really been able to talk about in these reviews until now.

I don’t have Chris Lewis with me for this review, so readers, I’m very interested in your thoughts on this if you want to drop ’em in the comments section below.

The thing is, I think ‘The Drowning City’ has some particularly difficult things to adapt, especially with the stuff connected to the Outer Dark. It’s just something that benefits from not having a tangible visual component, existing only as words. So, when I see the way Peter Bergting’s chosen to handle Felix’s transformation, I can’t help but be impressed by the tiny things he’s doing that suggest larger things. Felix is in a tank of black water with tiny bubbles, but it simultaneously reads as space full of tiny stars. Felix’s eyes still read as eyes, but his body’s also covered in a pattern that also reads as eyes. Bergting simultaneously gives us enough to read the visuals we’re presented with, while also putting just enough in there suggest something more. It’s a fine line to walk.

And then there’s the Green Hill Cemetery sequence.

Back in “Baltimore: Empty Graves” #3, there was a bit Bergting drew with a plant-like monster made of twisted roots or vines attacking some guys, and I loved that sequence. So when I heard Bergting was drawing ‘The Drowning City,’ I immediately thought of that moment from “Baltimore” and knew he could handle the cemetery sequence in this issue. It plays to his strengths as an artist.

There’s an energy to Bergting’s inks that bring the roots to life in a way that makes them feel like they have actually force to them—they aren’t just flailing about. And I loved how blurred the line is between Golnik’s corpse and the twisted tree, to the point that it could be one and the same. Even after the tree is defeated, the way Bergting draws Golnik’s remains, they’re skeletal, but not—his rib cage looks more like a root ball than actual ribs. 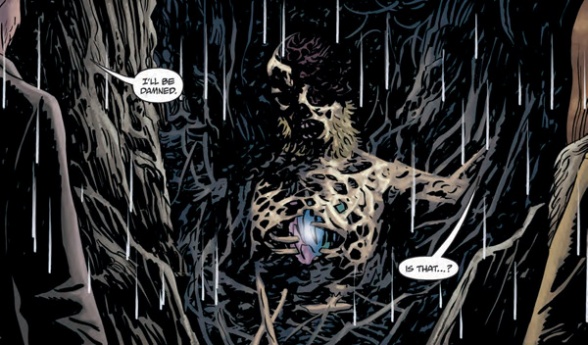 Let’s face it, there’s stuff in the novel that just doesn’t translate to comics, and if you look for what’s lost in translation, the comics are going to come up short. There’s some stuff, like putrid smell of Golnik’s mummified corpse or Molly being deafened by Joe’s gunshots, that just doesn’t translate easily to comics, but Christopher Golden and Peter Bergting have found other beats to hit instead that work better as visuals, like the roots not just entangling Joe, but beginning to burrow into his face. This sort of reinvention keeps the sequence alive.

Pretty much the entire last two-thirds of this issue is action, and I have to commend the creative team on the pacing here. When things get fast paced, so many actions occur on a single page that you get that sense of the characters being overwhelmed, but when the big stuff happens, when the comic needs to do a “slow-mo” moment, Golden reduces the action to one major action per page, with the other panels all being lead in and and lead out panels. This chews up a lot of page real estate, but it was absolutely worth it.

I’ve also got to mention Michelle Madsen’s colors in this sequence, because there’s a nice shift here. When Joe and and Molly first arrive in the graveyard, the sequence doesn’t have much contrast. Over the course of #3 and #4, this sequence gradually darkens and the contrast increases. The shift is really subtle, but it’s very obvious when you see the panels in greyscale. It’s the sort of thing you don’t notice while reading, but you feel its effect. 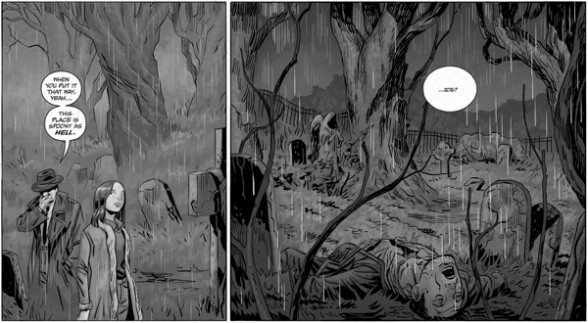 I loved this issue. After ‘The Drowning City’ #4, this series can never return to the status quo of previous arcs. Things are only going to get stranger from here…

Final verdict: 8.5 – “Joe Golem: Occult Detective—The Drowning City” #4 shows how an adaptation can step out of the shadow of its source material, being both faithful and inventive at the same time.