“Flesh and Blood” deals with the emotional fallout from “The Outer Dark” and takes us a few steps closer to the events of Joe Golem and the Drowning City.

Occult detective Joe Golem continues to protect New York City from supernatural danger when he investigates a home that has become a hotbed of paranormal activity, but the real danger may be from the person he least suspects.

A warning straight up, this review is full of spoilers, however I won’t be spoiling anything for those that haven’t read Joe Golem and the Drowning City.

The first Joe Golem story I ever read was the short story “Joe Golem and the Copper Girl,” and since it was my first exposure to that world, there are certain elements of that story that seem to define what makes a Joe Golem story. The big one for me was sadness, and maybe that affected the way I read Joe Golem and the Drowning City too.

And while the “Joe Golem, Occult Detective” comic series has had its moments—the rat catcher creature’s lair in the first arc for example was hauntingly, achingly sad—Joe himself hasn’t had that sadness to him, so I felt like some crucial spark from the original book was missing. It’s entirely unfair on the comic series, I know, but that was something that I craved. With each arc, “Joe Golem, Occult Detective” has evolved, getting closer to the original novel as it introduces new elements. But still, Joe wasn’t really sad, especially since he’s had Lori around to keep him in better spirits.

Until now. Lori’s started pulling away—and frankly, who could blame her? They’ve been together since 1965 and three years later, their relationship is stuck in a loop. Over and over Mr. Church keeps wiping their memories, trapping them in a weird limbo. Neither one knows this is happening, but they feel it, and Lori wants out. Mr. Church lets Joe play at being human, but he won’t let him truly be one. As Joe becomes aware of the reins he’s stuck wearing, the sadness I remember from the novel bleeds into the comic.

In the middle of the book, Joe visits a church. It’s not a major scene, but for his character it’s a crucial one. Joe feels at home in a church—he was born in one after all—and there’s something sad about having forgotten his dearest wish, to be flesh and blood. Mr. Church may think he’s protecting Joe from the truth, but this scene highlights how listless Joe is without it. It’s not just his relationship with Lori that’s stuck in limbo, it’s his entire life.

Patric Reynolds sells this sequence beautifully, too. Nothing in this scene says Joe is in any way conscious of his link to the golem, but the way Reynolds composes the pages, we get a sense that Joe is experiencing something like déjà vu (or perhaps déjà rêvé would be more accurate in this case). He stands in the ghost of a life lived before.

Perhaps the other reason I find myself thinking of “Joe Golem and the Copper Girl” is because Joe wasn’t sent on an urgent mission this time. He was sent on a small job, one meant to be a distraction. He was under no obligation to be there. Any investment in the mystery came from Joe himself. And this was the spark that first endeared me to the character when reading “The Copper Girl.” In that story Joe could have waited until the next morning to investigate, but he chose to go out in a storm because he knew that a twelve-year-old girl was in trouble. Joe’s a gruff character, but at his core he’s compassionate.

“The Outer Dark” pushed the “Joe Golem” story forward, with a number of new plot elements introduced, but “Flesh and Blood” slows down and looks more at its characters. This is a much more introspective story and relies much more on mood, and so my favorite moments ended up being single panels that emphasized that mood particularly well, like Joe alone in this panel sitting opposite an empty chair.

Or Joe having nightmares while Lori’s unfinished soda sits on his window sill. (Seriously, Joe has some major communication problems.) 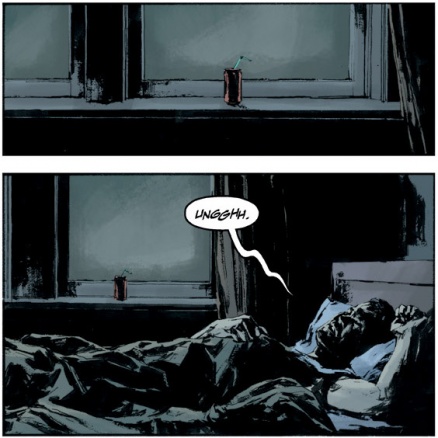 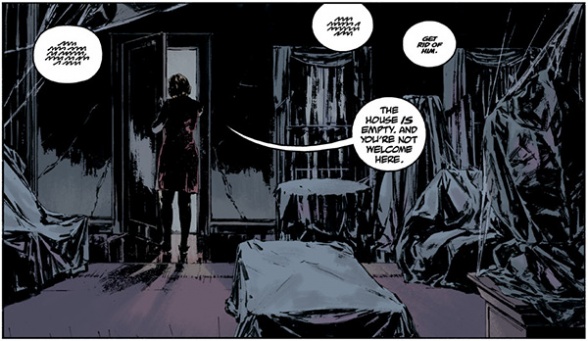 Of course, given the way the issue ends, I expect this’ll get much more bombastic in the second half. I certainly hope we spend more time in Madeleine’s shadow-filled house—it’s a very visually appealing location.

On a color note, I’ve mentioned before how I’ve been bothered by Lori always wearing pink—she’s always wearing different outfits, but always pink—and I think I may have finally figured out why. After all, all the golem flashback sequences are bathed in pink-ish light, and if there’s anything this issue makes painfully clear, it’s that Lori is destined to become a forgotten memory too. Will she too haunt his dreams? I can’t help but think she’s color coded specifically to join that world in Joe’s head. We’ll have to wait and see.

Also, I have to mention Dave Palumbo’s cover with all those Loris. It evokes a line of dialogue from Lori in the issue about how she feels like there are other versions of herself that have done things she can’t remember. The issue doesn’t have space to delve more into this thought without derailing the flow of the plot, but it is stunning to see that concept brought to life in Palumbo’s delightfully fractured cover.

Overall, this was a slow-paced issue, more focused on its characters than the mystery at hand, but given Mr.Church’s gaslighting antics, this is entirely appropriate. Plus it really has to capture that feeling of just going through the motions, of being stuck in limbo. This isn’t the sort of issue you rant and rave about—it’s small and quiet—but it’s also doing something crucial for the “Joe Golem” story as a whole.

Final verdict: 7.5. I enjoyed this one, especially the way it captured the spark of Joe Golem I remember from the prose works. However, I think the real impact of this issue will be felt in the stories that follow it, not so much here. This is laying a foundation for moments to come.