“Flesh and Blood” wraps up in quite possibly the best issue of “Joe Golem, Occult Detective” to date. 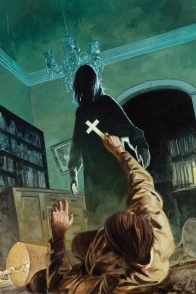 There’s much more than meets the eye in the haunted house Joe investigates, and Joe’s personal troubles get more serious.

Mark Tweedale: Up until now, the “Joe Golem” series generally tells two stories in tandem. One is the story of the golem, how it fought witches in 13th Century Croatia and how it awoke in 20th Century New York and became an occult detective in the employ of Mr. Church; the other is the current open case Joe’s looking into. While these stories unfold in tandem, they rarely overlap. The golem stuff (the dreams, Lori’s suspicions, Mr. Church’s dubious behavior) doesn’t play into Joe’s cases.

The case in “Flesh and Blood,” the mystery of Madeleine Carter, would’ve made for a fine story on its own, but there’s an extra spark in there thanks to a connection to Joe’s past… and given that a lot of the most significant bits of his past are in 13th Century Croatia, this wasn’t something I expected to emerge in 20th Century New York. It’s a welcome addition, and it gives this arc a little more oumph, especially where Lori is concerned. Since she’s never directly involved in Joe’s cases, she’s perpetually stuck in the B plot of each arc, and while that’s still the case here, the link between the A and B plot gives these two stories a way to feed off each other. It makes for an engaging issue.

Christopher Lewis: Agreed. I found this issue to be the most powerful “Joe Golem” story to date. Like you mention, the plots rarely overlap, however I have always noticed a similar underlying theme in each plot line that seems to tie the entire story together. In this issue I didn’t think there were underlying themes, but instead straight themes that meshed perfectly together to enhance the story. The conclusion of both plot A with Joe concluding on the result of his case and Plot B with what happens with Lori were so well paired to together that I felt emotion for the characters… specifically sorrow. It truly is amazing the emotion the creators’ evoke by contrasting the plot lines, and in my opinion speaks volumes about this issue.

Mark: Yeah, both plots complimented each other well. Given the format of the comic, I don’t think you could do this all the time—it could lead to plots feeling overly convenient—but occasionally, for the right moment, it can elevate the whole series.

And I think this sort of writing gives the artist a lot to play with too. Transitions from plot A to plot B aren’t just about setting up a new scene, but about juxtaposing the emotional qualities of the scenes. I’m gonna have to dive into spoilers to articulate this properly, I’m afraid. So in the scenes with Joe and Madeleine, the house has lots of interesting shadows in it, whereas the scenes with Lori and Mr. Church don’t… at least initially. Every time we return to Lori and Mr. Church, more shadows creep into the scene until the very last when the volume of shadows is pushed further than the Madeleine scenes. They reach a peak… and then vanish. The moment Lori’s memories are removed, all the shadows go with it. Look at the way Dave Stewart colors those panels too. The contrast is kept to a minimum. There’s a kind of blank quality there. Then when we go back to Joe, those shadows are ratcheted up to maximum. (I should add, you don’t see this in action scenes, where the background shadows are generally removed for clarity. That’s where Dave Stewart’s colors take over.) 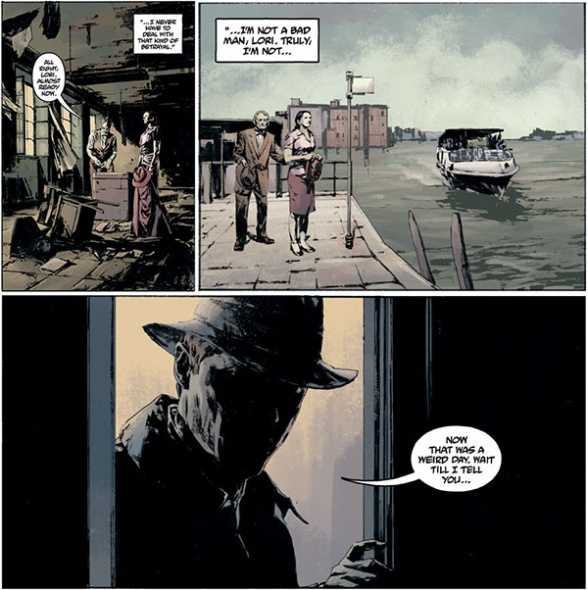 I must add, I’m becoming more and more convinced the pinks in Lori’s outfits and the golem flashbacks is a deliberate association with memory (as we discussed in our “Flesh and Blood” #1 review), especially because of one panel, after Lori has drunk the tea, when Joe is returning home. He’s got a pink sunset behind him and he’s moving forward into shadow. It just strikes me as a panel that’s saying Lori is behind him now. 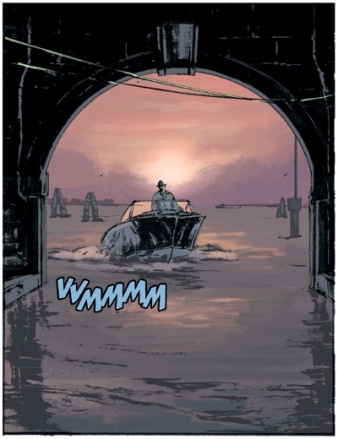 Christopher: You hit it on the head with the art and the goodbye to Lori. I wonder if she is gone for good? Since the erased memories always start to show up in Joe and Lori’s dreams, it is possible that Lori could find her way back to the Drowning City looking for answers to her past. If Mr. Church could completely erase memories then I think he would have done so with Joe’s memories of the 13th century by now.

That leads me to another topic, Lori and Church’s conversation. Based on the content of the dialogue, it seems that Church has never let Joe find out the truth about himself and doesn’t know the implications of what would happen if Joe did. Only that it might destroy Joe. It seems odd to me that Church would be violating Lori and Joe for years by wiping their minds without definitively knowing the consequences. Also, based on Lori’s reaction to the conversation, it seemed like this was the first time Church has tried an approach of telling her the ‘truth.’ It also seems odd to me that he wouldn’t have tried this before instead of continuously wiping Lori’s mind. Overall something doesn’t feel right to me about the conversation, and it makes me wonder more about Church’s motives.

Mark: As yet we know very little about Church, except that he has been an occult detective for a very long time. Before Joe, Church had given up all hope of companionship. ‘I no longer dare risk the lives of others. I no longer dare invite the grief that accompanies the death of a friend.’ I think Church set out to dislike Lori right from the start, simply to protect himself from grief again. The way he talks to her, I think he respects her fiery intellect, and so he’s fighting to preserve this shell of a life where a deathless golem is his only companion. I see this as an act of self-preservation and cowardice.

Christopher: Interesting. We should probably grade this one. I am going to have to give this issue an 8.5. The pairing of plotlines worked perfectly, which in turn mixed well with the art. As I said at the beginning of this review, this is the most powerful “Joe Golem” story to date.

Mark: I agree this issue had more impact emotionally than any that preceded it. Christopher Golden had this planned since “Joe Golem, Occult Detective” began and it shows. He gave Patric Reynolds and Dave Stewart plenty of room to let the art tell the story and both totally delivered. I’m sorry to see Reynolds leave the series, but he certainly bowed out on a high note. I’m giving this an 8.5 too.